RECAP 63: Jacket Of All Trades. Pens Own New Look Blue Jackets Off Line, Win 5-2 in Columbus 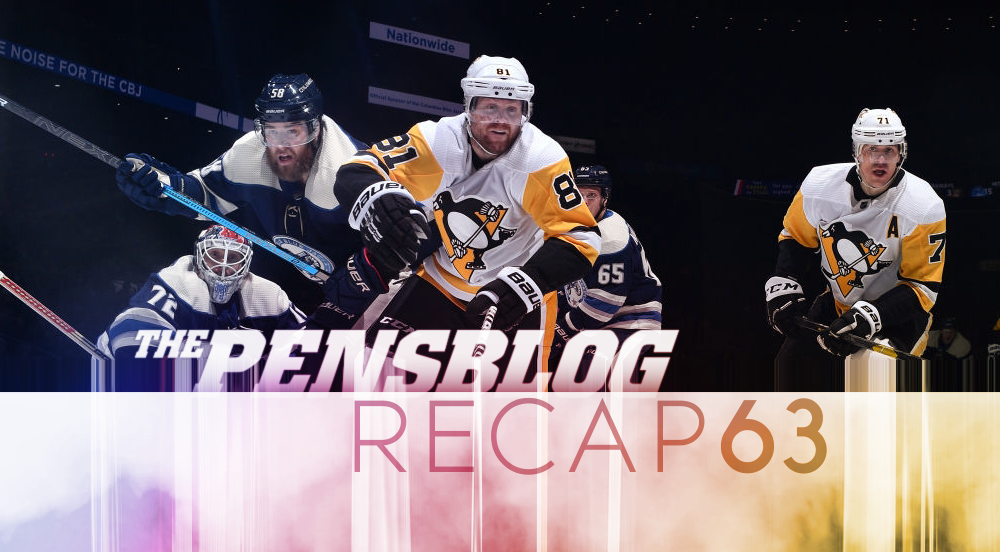 RECAP 63: Jacket Of All Trades. Pens Own New Look Blue Jackets Off Line, Win 5-2 in Columbus

If a dictionary existed where you could string together words and phrases for it to pump out a definition of those words/phrases and you entered in “ideal road game,” this exact game for the Pens would pop up.

What they got in this playoff-like game was exactly what they needed: contributions from all four lines, puck control, steady goaltending from Matt Murray, and simplistic play on the backend that was reminiscent of the 2017 run.  Hell, even Jack Johnson had a solid outing.

It helped, too, that Sergei Bobrovsky was about as effective at stopping the puck as Ray Charles is at obeying red, octagon-shaped traffic signs.

With the win, the Penguins have now won 3 straight in Columbus, dating back almost a calendar year.  They’re also 8-1-1 in their last 10 against the Jackets since that 7-1 drubbing in Columbus in December 2016.  That’s a great trend to have developed considering these two teams are within a point of one another in the standings and have to meet for a home-and-home next week.

March is about to be a war.

The Penguins did a whole lot of getting worse at the Trade Deadline, but neither of those two players made their debut (full disclosure: I will be writing a diatribe about Erik Gudbranson today or tomorrow).  The first three lines stayed together, Simon came in for dearly departed Tanner Pearson, and Riikola and Trotman came in for the injured Letang and Dumoulin. Murr somehow wasn’t murdered by the 169 Pens fans in Philly for being screened by Jack Johnson and made the trip to Columbus to get the start opposite Not Traded Bobrovsky.

Biggest highlight of the period until Money Bag scored was Jack Johnson getting a tribute video for some reason.  That reason is everything is bad.

About a minute after Johnson got danced following his tribute video, Jake scored his 29th of the year on Crosby’s 50th assist of the year.  Both of those numbers are good.

Coming straight from a d-zone draw won by 87, Pettersson won the initial battle to give Sid that coveted FOW.  His stick lift and bodied of Atkinson gave him the position to shift it in behind to Ruhwedel for the quick out to Hornqvist on the far side.

Cue Big Dick Swinging Pat charging through the neutral zone, blowing by Seth Jones, throwing some one-handed backhand sauce to nutmeg Duchene and paint the prettiest of pictures of 87 to feed Money Bag in the slot.

Crosby’s pass was something else, but don’t sleep on Hornqvist’s dish.

About a minute and a half later, the Jackets looked like they had drawn level after Johnson failed to cleanly get a zone exit and Jultz pissed himself behind the net with Foligno bearing down on him.

Murr would go on to turn away a close range Anderson shot, only for Foligno to grab the rebound and go up high to Jones for a blast that beat the down and out Murray.

Unfortunately for the Jackets, HCMS would challenge because of Jenner’s inability to be anything but a dickhead, costing the Jackets a goal by taking out Murr here.

any time boone jenner is in the crease it should be no goal because his name is a worse version of that stupid cloyd rivers thing pic.twitter.com/LCSrklF2kJ

And under 3 minutes later, the Pens were out here taking the opportunity to double their lead.

Off a controlled CBJ breakout, Rust does well as the lone forward pressing, forcing the breakout to go up the far side of the ice.  Cullen was there sealing off the short pass on that side while McCann lurked on the near side, so it forced CBJ into the stretch pass through the neutral zone.  The Pens trapped the shit out of it for Ruhwedel to pick the stretch pass and turn it back up ice to Cullen, whose quick little touch pass released McCann to walk in, push the D back, and use that open space to snipe one past Bob.

Following the goal, Bryan Rust got rocked and looked like his ankle jammed as McQuaid landed on it, forcing BFR to need help getting off the ice.  It’s that time of year again where all of the Penguins players start dying, one supposes.

That McQuaid hit on Rust sure was something pic.twitter.com/LYS2Z6v2Kf

Honestly, by the book, this is a legal hit.  Rust is reaching and making contact with the puck when he’s dumped.  It’s just a dangerous hit because of the distance he’s away from the boards and the force with which he’s thrust into them.  McQuaid has a history of playing on the edge, but he doesn’t have that supplemental disciplinary record you’d expect him to have.  Just unlucky.

But the Peng were not going to be deterred by that or losing an offensive zone draw of their own that was sent right back down their throats.

As it came back down, Riikola got a little luck and help from Trotman to turn the puck back north for the rush with 71 and 46 leading the charge.

Those two got it in deep, but only as far as Seth Jones.  Jones took the Pettersson approach on the Pens first goal, sending it in behind the net to his D partner (and former Penguin) Scott Harrington.  Harrington looked to skate it out, but Phil! attacked the kid, poking the puck off of his stick for ZAR to latch onto.  ZAR, with 3 guys around him, had one option: send it to Malkin at the point.  His pass slightly missed the mark, leaving Gene to just turn and rifle a clapper on net.

Geno gets a bounce off Jones, but who cares.

But just over 3 minutes later on a delayed penalty for Hornqvist high sticking Jones, the Jackets would finally get their first of the night.

Hornqvist did some fiery work down low to force a turnover that Jake looked to bury, but as Jake circled back around and threw it towards where 72 was battling in front, he caught Jones up high.  Jones somehow overcame this to spin out of danger and hit Harrington to skate it out.

As soon as Harrington got into the neutral zone, he drew in Jake and had Crosby’s and Hornqvist’s attentions, which opened up Dzingel near the benches.

Dzingel took the pass and stopped up, which looked like it caught Ruhwedel and Pettersson by surprise.  They dropped too far off instead of one of them stepping up and holding Dzingel there, which opened up Bjorkstrand on the far side to take the pass, hit the line with speed, and beat Murray with a bad ass release.

That’s a really hard shot for any goalie to handle.  Bjorkstrand is a right shot coming down the left channel and fires the puck with pinpoint accuracy across his body while he’s still moving his feet (sort of like Kessel does).  That’s so difficult to do and Bjorkstrand made it look effortless.

Two minutes later, the Pens shot themselves in the foot as Ruhwedel took a tripping penalty to put the Jackets up a man.

Right off the opening draw, the got themselves set up, worked it over to Panarin on Ovechkin Drive for the howitzer.  Jultz got in the lane, blocked the hell out of it, but the PDO Gods are assholes sometimes, sending the block straight to the stick of Atkinson to put it into the empty cage.

Late in the period, Hornqvist went into full Batshit mode, melting right the fuck down after Boone Jenner’s dickheadery got in his kitchen.

Patric: What do you want me to do?!
Sully: Literally just breathe, homie. pic.twitter.com/54T3vCGIgJ

Then, with like 13 seconds left, Simon went off for tripping to give the Jackets a clean sheet of ice and 1:47 to work with to open the period in their attempt to draw level.

The Penguins somehow killed off the penalty.  It was surprising.

The Jackets coaching staff did not handle this well.

Not only did Murr have to deal with that 3v0 in front of him, but then he had to turn away Dubinsky and Riley Nash on the doorstep a few minutes later.  This seems like a good save.

That set the stage for Jared McCann to step up and shine with his second after both teams turned the puck over in the neutral zone.

The second of which came from the Penguins, leading to the Jackets launching it down below the Pens goal line.  RTJ won the race to the dump in, beating Foligno, spinning out of his check, sucking in Anderson and moving it up the wall to Simon.

That’s where McCann took over.  Simon bangs the puck on the backhand to where McCann is streaking.  McCann gets his stick out to chip it up and knock it out of midair between Harrington’s legs to pass it to himself, peel in off his off-wing, and wire a wrister 6-hole on Bob.

Both teams traded off powerplay chances right after the goal with Pettersson going off for holding with just over 4 to play, only to be negated about 90 seconds later after Crosby blocked a shot and took off on a shorthanded breakaway, earning a slashing penalty on Seth Jones.  Once that was all said and done and Bob vacated the net for the extra skater, Matt Murray and Sidney Crosby sealed the deal and took the full 2 points back down I-70 East.

Pens wrap up the week and kick off March with back-to-back away games in Buffalo and Montreal on Friday and Saturday.  Buffalo hasn’t been good lately and are trailing the Pens by 8 points, but Montreal sits a point better than the Pens in WC1 with having played one more game.  Both matter.  One matters more.  Do it. Go Pens.