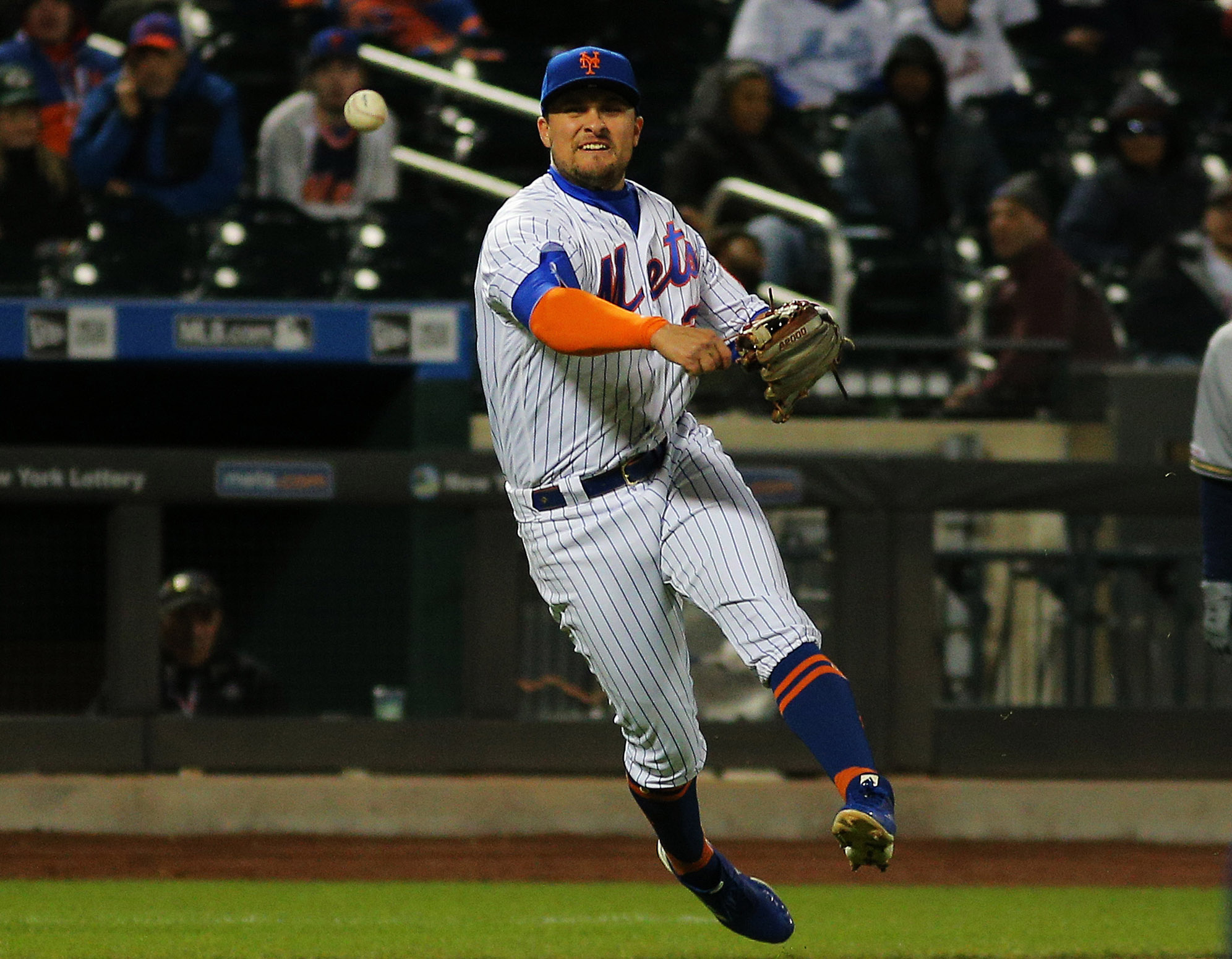 So much to try to dissect from Saturday’a 8-6 loss. Let’s see if I can do so without coming off as deranged:

Jeff McNeil had the right idea. Lorenzo Cain rounded second hard in the top of the first after a topper to J.D. Davis barely got Mike Moustakas. Cain didn’t have to rush back because Rosario went to third, so Lorenzo Cain was playing the “old man card” by taking his time and basically signaling to Pete Alonso, who had the baseball, to take it easy on him.

McNeil was sneaking in to back up second base, much to Cain’s surprise. Unfortunately Alonso threw behind Cain when McNeil got there, but Alonso turned into Cain’s mark as he threw it away, and while everybody backed up a base, nobody backed up McNeil (and why would you), so Cain scored all the way from first. It’s a shame that at one point the run that made it 1-0 was the difference in the game. It truly would have been a hell of a play had it worked.

Shocked that nobody threw their Noah Syndergaard Game of Thrones bobblehead at him after tonight’s effort. Syndergaard lasted five innings, gave up five runs, ten hits, three walks (!) and two home runs. There was a lot of soft contact early, with one run coming on the failed attempt at Cain. But Noah gave up two home runs in the fourth to Ben Gamel and Christian Yelich (his first home run away from Milwaukee) on contact that you could classify as hard.

Syndergaard has seemingly been in a constant battle to find himself. The right way to train, the right pitches to throw, the right way to wear his hair … different types of sliders, ditching artsy pitches for the more mundane, etc. Syndergaard will pass by lots of people on the street who will give him pointers on what to do. He will most likely listen to zero of them. But to me, the best thing Noah can do is to do what Cody Bellinger did: go back and remind yourself of what made you successful. Watch tape of the good times, and forget about the bad times. What pitch sequences worked? What mechanics were best? What type of slider and fastball gave you the most success? Go watch Game 3 of the World Series. Go watch the complete game in San Francisco. What brought you to the dance, and what made you look like Fred Astaire?

Pay attention to that, and treat the rest as if it happened to someone else.

Travis d'Arnaud has been exuding some incredible "future Oriole" energy for a couple years now.

Many have asked why so many complain about the backup catcher when the starting pitching is the problem? Well first, Met fans always complain about the backup catcher. It’s a tradition unlike any other, starting around the time Mackey Sasser overthrew his first pitcher. Also, when the lynchpins of the team, whether it’s Syndergaard and deGrom or whether it’s Darryl Strawberry are struggling, there’s really nothing you can do because everybody is depending on them.

From an early passed ball, to having runners run all over his failure to block pitches, to this:

For how many years do we have to watch the same thing? pic.twitter.com/nO59XWB65g

To getting crossed up on a Robert Gsellman pitch, to getting thrown out stretching a single to a double by Gamel (which looked worse than it was because it took a perfect throw to get him so it wasn’t a bad chance to take, but doing it ahead of Alonso’s home run in the seventh which might have tied it instead of making it a one run game made the optics worse than they should have been), to having Todd Zeile blast him for not yelling at Jeurys Familia to let a topper go foul in the eighth (who really knows what happened but Zeile at least knows what should have happened) to his .087 batting average …

Reminder: Travis Darnaud could have been cut in March and the club would have saved 4 million dollars. That could be Gio. How much WORSE could mesoraco or rivera be?

And that’s why there’s frustration. Because it seems like an easy fix now, and it seemed like an easy fix before the season started. Man, d’Arnaud might welcome a trade to the Orioles at this point. He wouldn’t be the only one.

But Don’t Let That Distract You

Because yes, there bigger problems than d’Arnaud. The big two pitchers not performing are a problem. To be fair …

But then there’s the bullpen. Gsellman gave up a run in two innings. Familia came in after the rally to make it 6-5 and was brutal. The bullpen hasn’t been great when the club has been down instead of up, and that reared its ugly head too.

After Amed Rosario and Alonso homered in the seventh to give the Mets life, they scored a run in the eighth on a walk and two singles, the latter from Rosario to cut the lead to 8-6. Then Craig Counsell brought in Josh Hader. The Mets countered with pinch hitters Todd Frazier and Wilson Ramos. If Frazier and Ramos had three at-bats in the game, it would have been a tough ask to get a hit off Hader. To come in cold off him and get a hit is an impossible task. Not that it wasn’t the Mets best chance at that point. But it was slim and none, and slim just got traded to Baltimore.

Josh Hader, 12 Swinging Strikes on Fastballs in 2 innings (in under 20 seconds). 😮🔥 pic.twitter.com/IurA9NLHsv

Frazier, Ramos, McNeil. Then Alonso and Cano, with a grounder by Conforto to end it. No chance at all. So many chances to take control of this game early, but by the time Hader came in it was all over.

So What Have We Learned?

Simply, that this is a team firing on a finite amount of cylinders right now. The top of the rotation is stuck in the mud for some reason. The bullpen is infuriating. The lineup woke up against the Brewers bullpen after three games of dormancy. And even the bloggers are failing …

The ball was definitely going foul. It was hitting going to the dirt.

This team drives me so nuts that I can’t type. “Hitting going to the dirt?” I suck too. But I’ll always suck. The Mets don’t have to. And Sunday against almost future former Met Gio Gonzalez would be a perfect day to stop sucking.