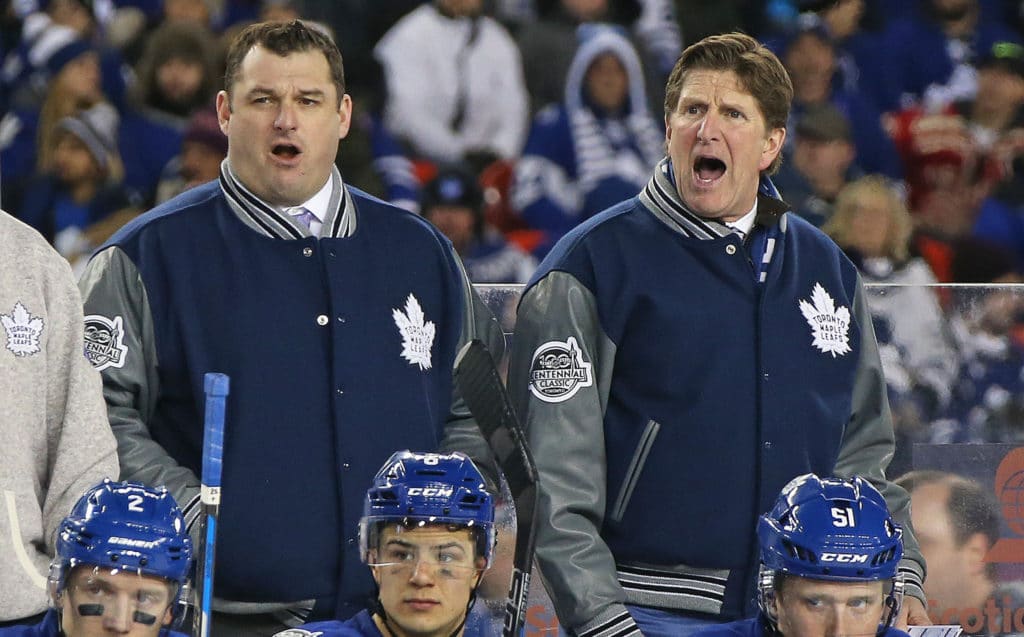 One name that has consistently been connected to the Edmonton Oilers is that of DJ Smith. The longtime OHL coach made the jump to the NHL in 2015-16 when Mike Babcock took over the Toronto bench, and has been a mainstay on the staff ever since.

During Smith’s time in Toronto, the Leafs have emerged as one of the best young teams in hockey, known for their offensive prowess and dominating speed game. As a result, Smith has garnered attention around the league for his first NHL head coaching gig. In addition to Edmonton, Smith has been connected with the Buffalo Sabres and Ottawa Senators at points this off-season. He’s an up-and-coming coach who is showing up on the radar of teams after some strong years in Toronto.

Smith’s coaching career started in 2005-06 when he joined the OHL’s Windsor Spitfires as an assistant under head man Mo Mantha. Mantha moved on after the season, but Smith stayed on board to serve as an assistant to the new bench boss, Bob Boughner. Smith remained as an assistant through the 2009-10 season, when the Spitfires won their second straight Memorial Cup on the strength of Taylor Hall, Cam Fowler, Ryan Ellis, Adam Henrique and Zack Kassian.

Following that second straight Memorial Cup victory, Boughner headed off to Columbus and Smith was promoted to associate head coach, a role he would hold for just a single season until taking on a new challenge.

That new challenge? Smith’s first ever head coaching gig in the OHL. He left Windsor for Oshawa, taking over a Generals team ready to make a jump. Smith made the playoffs in all three seasons as Oshawa’s coach, reaching the second round in year one, the third round in year two and culminating with an OHL and Memorial Cup Championship in 2015.

That was enough to put Smith on NHL radars, and he elected to join forces with Babcock and the Leafs starting in 2015-16.

No matter the league or the sport, assistant coaches and secondary players from successful organizations will be targets for losing organizations trying to fix their culture. Say what you will about the Leafs and the insufferable coverage they get, but Toronto has been a successful franchise for three straight seasons now. Smith has been there for it all, and has a lengthy track record of developing young players and winning.

Babcock has been able to keep his staff mostly intact for all four seasons behind the bench, but it already appears that Jim Hiller is moving on, while Smith has garnered attention from a few teams. Smith is out there because he’s put in the work for over a decade at the OHL and NHL levels, and has established himself a young up-and-coming coach who has a good reputation for developing players.

The fact he has helped steer the development of one of the most exciting teams in the league, while coaching in a market with immense pressure, only helps his case. Whether it is this summer or next, Smith is a prime candidate to take a bench of his own.

When Babcock hired Smith, one of the things he told reporters was that he wanted to hire guys who are going to be NHL head coaches one day. Smith would certainly fit the bill. It’s overrated to call a coach a winner because, in the end, it’s all about how the players execute. That said, Smith did nothing but win in the OHL.

He won the Memorial Cup three times, twice as an assistant in Windsor and once as head coach in Oshawa. During that run with Oshawa, Smith helped develop a plan to slow down Connor McDavid, who was limited in a major way in the OHL Championship round.

His role in Toronto is focused on the defense and the penalty kill, which have seemingly improved year after year. In fact, when Smith took over, the Leafs ranked 22nd in the NHL in penalty killing. In 2018-19, the Leafs finished 16th overall in the NHL with a 79.9% PK.

Lastly, it’s hard to deny Smith’s ability as a player developer. Look at some of the players that have developed under him in the OHL, and some of the young players he has helped in Toronto. He oversaw the development of guys like Ryan Ellis, Taylor Hall, Adam Henrique, Zack Kassian, Cam Fowler, Jack Campbell and Austin Watson while in Windsor. That’s a pretty impressive list that features three legit impact NHL players in Hall, Ellis and Fowler.

The man can develop talent, and works quite well with young players. That will be important for an organization like Edmonton that is banking on some young prospects to come and help save this team.

Smith isn’t a sexy name to Oiler fans and won’t get the attention that Dave Tippett and Todd Nelson have gotten and will get throughout this process. That said, Smith has carved a nice little resume for himself and has proven that he can work with and develop young players.

The Oilers would be foolish to not interview Smith and I think he’s a very strong candidate that has earned an NHL head coaching gig on merit. Will he get it? That’s another story, but he should at least be under consideration.