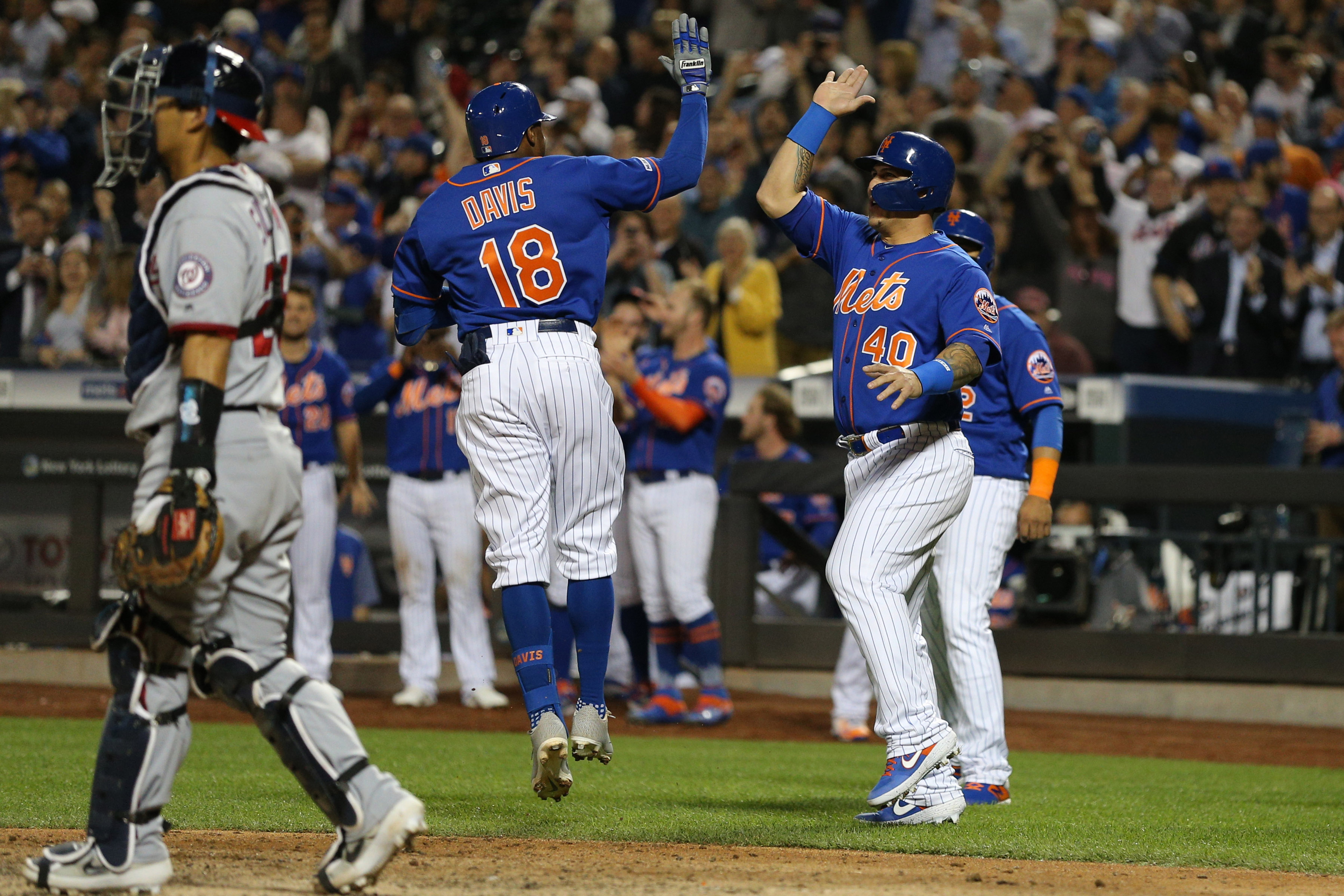 It would have been a punch to the gut for the Mets if they had lost 1-0 with a home run by Adam Eaton being the margin of victory in a game between Max Scherzer and Jacob deGrom. And when the Mets couldn’t get through Joe Ross and Matt Grace in the 7th inning, it certainly looked as if that was going to be the case. With Robinson Cano pulling a quad in the third inning after running mildly hard to first base on a bouncer up the middle, it would have been a particularly “on brand” loss for the Mets.

With the score 1-0 in the eighth, the Mets got to Kyle Barraclough, who the Mets handled very well last year. But with two outs and two runners on the Nationals turned to Sean Doolittle, which is when you probably thought “game over”. Doolittle hit Carlos Gomez to load the bases and then gave up a hard hit three run double in the gap to Juan Lagares to give the Mets a 3-1 lead. Doolittle then walked Wilson Ramos to bring up Rajai Davis, who not only was batting for the first time with the Mets after he was called up to replaced the injured Brandon Nimmo on the roster, but …

Rajai Davis took BP at Lehigh Valley, found out he was getting called up around 5 p.m. He took a two-hour Uber to Queens.

Davis said he had great conversation with his driver, Jason, who was happy to make the drive.

“We were both excited,” Davis said. https://t.co/bxoTdufmSj

If it looked familiar to you, it probably was …

If it looked familiar to Doolittle, it definitely was …

Davis is now 4-for-5 against Doolittle in his career. No wonder a two hour Uber ride wasn’t a problem.

The Nationals are now 2-9 in games that Max Scherzer starts after the Mets’ 6-1 victory. It serves the Nationals right for all their bending over backwards to show why he should have won the Cy Young last season. I hope they’re satisfied.

As for the Mets, winning three straight against Washington is more along the line of what we expected last week. Thankfully they’re taking advantage of a second chance to put one through the heart of the Washington Nationals, and can probably deliver the death blow with one more victory on Thursday afternoon. With the Tigers coming in next having lost two straight at home to, who else, the Marlins, perhaps the Mets could finally be on the way to getting well, even if Cano is going in the opposite direction.

(Either that or we’re all witnessing the inevitability of the Marlins’ division crown after they’ve won five straight games.)