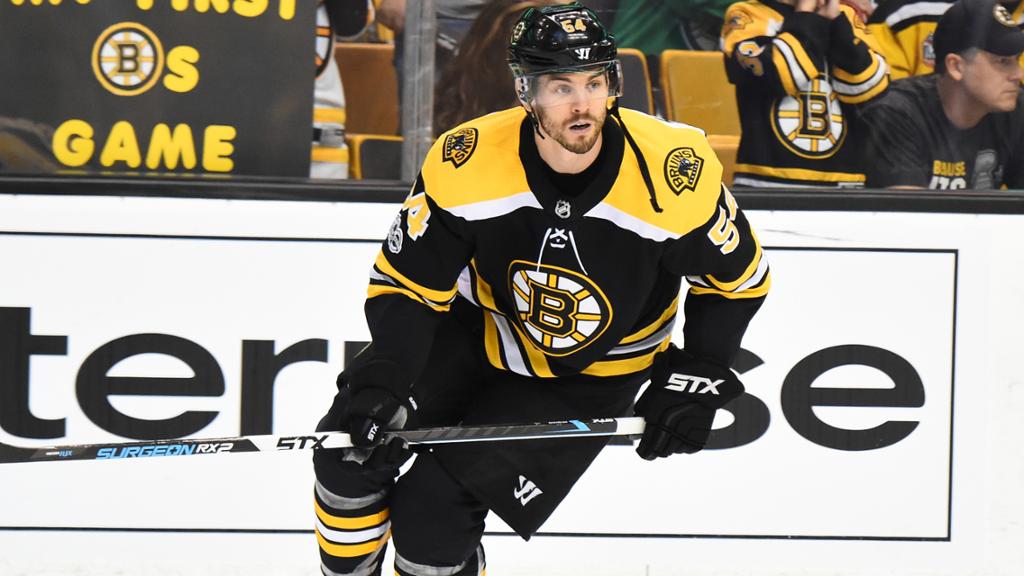 When the Columbus Blue Jackets went ‘all-in’ at the NHL’s annual trade deadline in February, they did so knowing that many of their players were not returning in September. Artemi Panarin and Sergei Bobrovsky are almost certain to leave, while rental Matt Duchene appears on the way out too.

Lost in all of this is Adam McQuaid, the veteran defender acquired on deadline day from the New York Rangers. A Stanley Cup Champion (2011) who played most of his carer with the Boston Bruins, McQuaid will hit the market this summer for the first time.

If Peter Chiarelli were still here? You could bet your bottom dollar McQuaid would be on his way to Alberta this summer. With Ken Holland now in charge? I wouldn’t exactly rule it out.

The Bruins needed to relieve some cap issues in the preseason, and dealt McQuaid to the Rangers in September to accomplish that goal. McQuaid played in 36 games for the rebuilding Rangers, but didn’t fit the team’s long-term plans. New York always had a deadline deal for McQuaid in mind, and they cashed him in, shipping him to Columbus for a pick.

The Jackets added McQuaid for defensive depth for what they hoped was a long playoff run, but the veteran never really got established. He played in 14 regular season games, but suffered an injury and never suited up in the playoffs for Columbus.

The Jackets are relatively set when it comes to their defensive depth chart moving forward, but have tons of questions up front. They don’t have the money to allocate to McQuaid, and will likely let him walk as they try and recruit scoring this summer.

McQuaid is old school. He’s a tough customer that will drop the gloves with anyone who challenges him or who he feels takes liberties against his teammates. He’s physically punishing, and makes life miserable for opposition forwards. Watching him for years in Boston, I always thought he was one of the toughest defenders in the league.

McQuaid is a solid defender in his own zone, but has limitations. He’s a depth piece that is never going to fill a top-four role for a club that expects to contend. He doesn’t provide much at all in terms of offense, and his puck moving skills are suspect at best.

Split between the Rangers and Blue Jackets, McQuaid managed just seven points (3-4-7). In his lengthy career, he’s only hit the 15 point mark once, back in 2010-11.

McQuaid average 15:47 time-on-ice per game this season, struggling to get a regular role in New York or Columbus. He was a possession anchor, posting a horrid 43.3% Corsi-For in 50 total games on the season. (Stats via hockey-reference)

McQuaid, to be quite frank, was not a good player in 2018-19. Here’s a look at his scouting report via The Sports Forecaster.

If the Oilers are bringing McQuaid in, it is because they don’t feel like any of their prospects are ready for NHL duty out of the gate and they traded Matt Benning for forward help. In that case, McQuaid would come to Edmonton and be their third-pairing RHD.

Odds are, based on his performance this past season, McQuaid should not be counted on for regular duty. I’m not sure he is an NHL player at this stage of his career.

McQuaid is a veteran, a tough customer, a leader and has a Cup ring. That alone probably gets him a one-year worth around the $2,750,000 he made last season. That, in my mind, is a significant overpay.

Adam McQuaid had his time as an effective NHL defender. He was one of the toughest guys in the NHL when in Boston, and anchored a normally strong third-pairing for the B’s.

Those days have passed, and I think it is fair to question whether or not the 32-year old is still able to play at this level. I’d have some time for test driving him in training camp with a PTO, but that’s about it.

Don’t let the past influence the future when it comes to this player. The signs are all there, McQuaid isn’t worth a contract this summer.