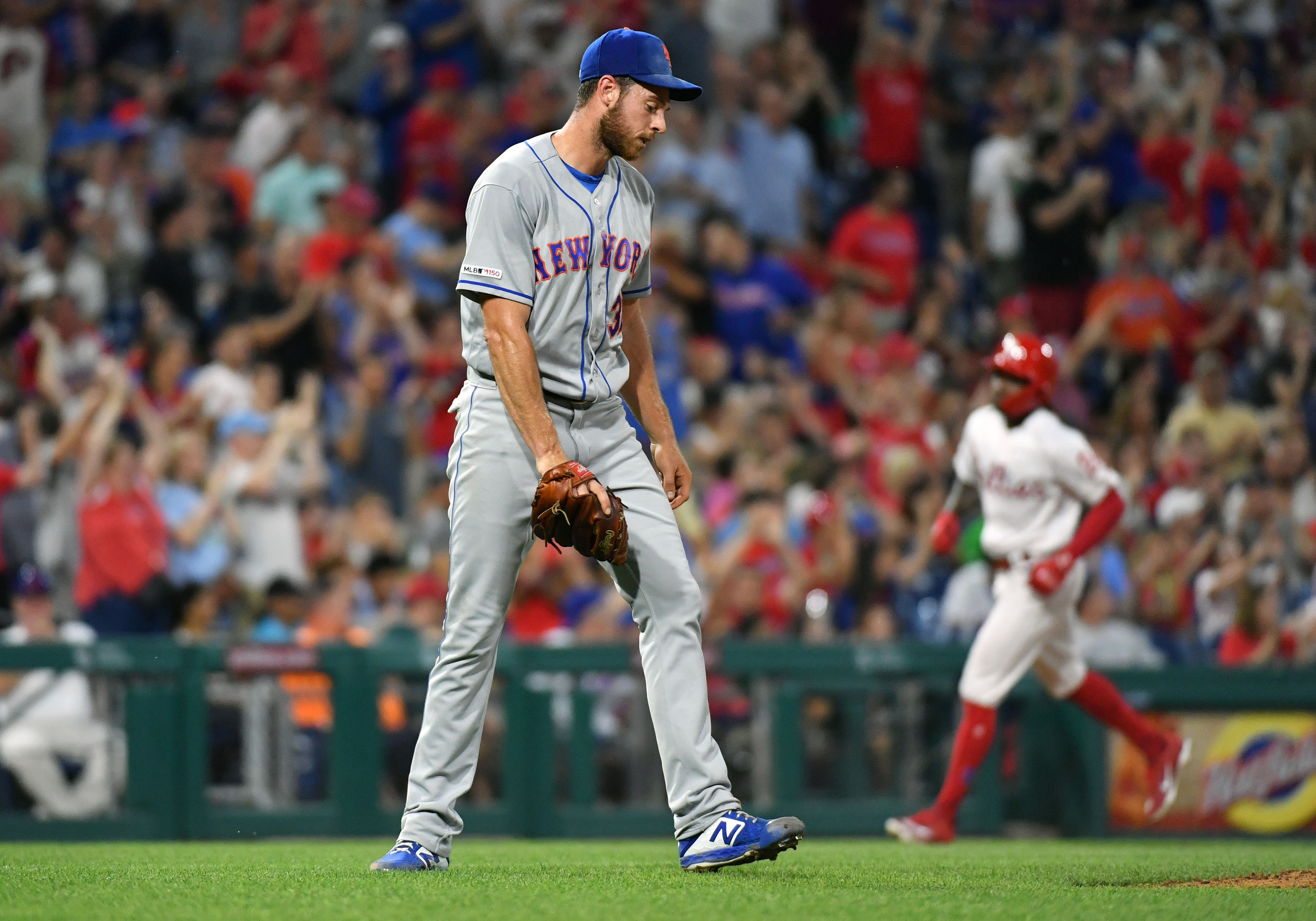 The one thing that Mets fans were hoping for was that “See You Tomorrow” would turn into some sort of galvanization for the ballclub as they rip off 13 straight victories and prove to everybody that Brodie’s vision was correct all along. But give the Mets credit for this: They’re great at busting myths.

Monday (or as Handsome Art Howe knows it as … “tomorrow”) was one of those Citizens Bank Park slugfests which saw a whole bunch of lead changes and, at one point, a 6-5 Mets lead. But Steven Matz was in the midst of one of his Philly Specials, which for him has a much different meaning than it does for Nick Foles. Matz coughed up the lead for the final time with a Mikael Franco home run in the fifth as he was taken out at 7-6 Phillies, but at least he got 13 outs which is much better than he fared the last time he was in Philly.

Brooks Pounders then came in and … yes … he got pounded (sorry). His one and two thirds were capped off by a pinch hit home run by Jay Bruce (again, sorry) to make it 12-6 and throw the game into the crapper (what, I offend you?) I mean, how dare Mickey Callaway leave these these pitchers in the game too long and let this game get away???

According to an industry source, it was the rookie GM who instructed Mickey Callaway to remove Jacob deGrom from a game in Arizona earlier this month in which the Mets ace sustained a hip cramp. After deGrom was removed from the game in the seventh inning, the bullpen imploded in a loss that added to the frustration of a 2-5 road trip.

The source said Van Wagenen, who was watching the game at home on TV, communicated with a member of the Mets support staff with an order to remove deGrom from the game. Callaway complied with the order, and deGrom was visibly upset as he departed the field, certain he could continue pitching. The manager was grilled for the move, but at the time insisted the decision was his.

“Hell, yeah, it’s unusual: Sending word to the dugout, telling the manager what to do?” the source said. “I have never heard of that before.”

MLB rules stipulate that players and coaches cannot use cell phones anywhere during a game.

The source added there was grumbling at the time within the clubhouse that Van Wagenen hadn’t come forward and taken responsibility for the decision, as the perception persisted deGrom was unhappy with a manager fighting to keep his job.

Well I still don’t condone Handsome Art Howe calling a reporter a motherf***er for a salutation, but if this is all true, and it really wasn’t the first time this happened, then I wish Mickey well in his second job because he’s obviously going to do much, much better than he’s doing now.

Are we really serious with this bullshit?

Is this what we have to look forward to for the next five, six, seven years … or maybe more because Brodie Von Monorail is Jeffy’s golfing buddy and might really have a job for life with these clowns? What manager can succeed with this nonsense??? It seems like common sense to me, but I’m sure some people would say that this is part of the evolution of baseball. Bullshit. Collaboration is the evolution of baseball. Not micromanagement. That’s what this is. And nobody in any line of work deserves that. Handsome Art Howe deserves to pass or fail on his own. (Trust us, he can fail on his own.)

Or perhaps Brodie Von Monorail will also be a scapegoat this offseason as Jeffy tries to renake his image into somebody that actually gives a shit, only to continue the shell game by somebody he once had a Bud Light with on the University of Michigan campus in the 70’s. Or perhaps Phil Regan will be the new GM because he once picked up Sandy Koufax’s stirrup. Either way, I’m sick of this. I want to root for an organization who gets the most out of its roster/payroll/market every season.

I’m not the only one getting sick of this. I’m going to point you to a couple of things. One is a tweet thread from Allison McCague of Amazin’ Avenue:

– Had a press conference in which BVW said not much of anything as usual, Mickey Callaway and Jason Vargas were basically unapologetic, and they also made Jacob deGrom talk for some reason (??).

– Allowed it to leak to the media that the general manager literally texts the manager orders during games about in-game decisions.

I know, rationally, that I really shouldn't put myself through this. I know no one should. The Wilpons do not deserve Mets fans. But fandom isn't rational. So here I am. Unsure of really what that whole rant was for and unsure how much longer I can do this.

The second person I want to quote is somebody who has done Mets podcasts and is a younger but formerly loyal fan who knows his shit. This is piecemeal from what he messaged me tonight as we pored over the latest clown show:

I’m going to come super clean to you right now. I really no longer can consider myself a Mets fan, although I follow them daily just as thoroughly as I can. The Wilpons have really sucked any enjoyment out of baseball I have, and I find myself genuinely wanting to root for teams like the Rays, Padres, A’s, and Rockies, even, who seem to understand how to construct and be respectful from moral and business perspectives. (…)

This is coming from someone who you know isn’t a frontrunner. I went to a double-header instead of going to my frigging prom. (…)

It’s really sad. It’s been a slow trickle. I’m passionate enough to watch at the gym while I’m running, but I believe that they’re totally transparent and I’m only alive for so long and I’m breaking the chain. If I don’t, how can I expect others to? How can change happen? I have such limited money and time in life. If they’re going to keep slapping me, why even stay “loyal”?

Not to mention that their official twitter account throws shade at the loyalists while they have a personality working for their official station that admonishes us for not appreciating Chase Utley!!!

We’re dogs who should just take our bowl of cold soup and like it!!!

If the two people above are having thoughts of officially jumping ship and appearing at ballparks around the country dressed like Sting trying to decide if he’s going to join the nWo or not, then I’m sure there’s more. Heed the exasperation in their thoughts and process the hopelessness in their words. Because once they all jump ship, the Mets will be left with their corporate business partners buying the expensive seats (though not necessarily filling them), and the people who come to the ballpark just for the food. Plus the odd sycophant who will get on your ass for being critical of the team while trying to start the wave from right behind home plate because “I’m gonna get on TV, man!!!”

Because more nonsense like Brodie Von Monorail managing the team from his living room is going to turn real passion into apathy. Apathy is deadly.  They’ll still have their ticket sales. But they’ll have no soul. The soul will be busy raising Rays fans.