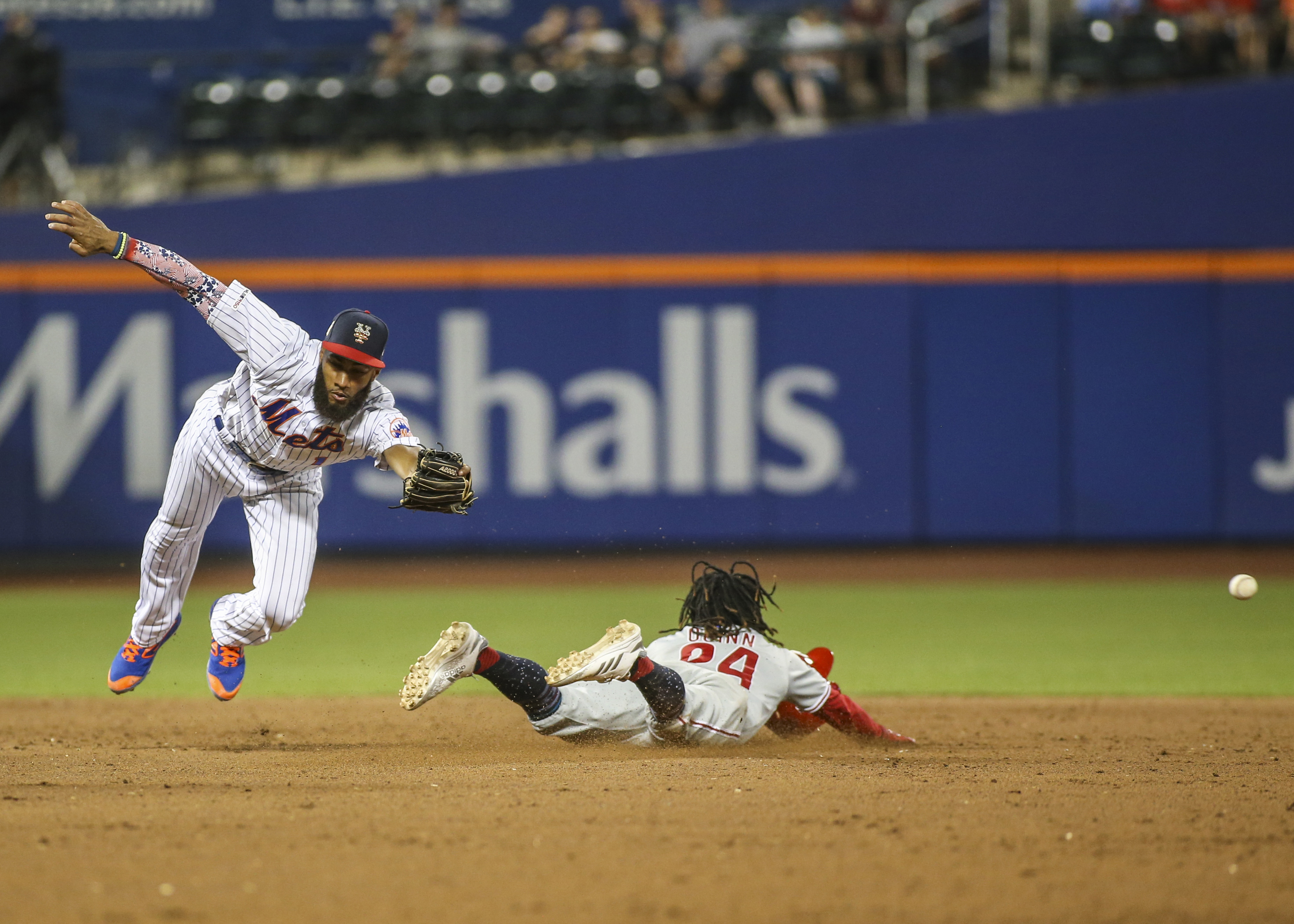 (Okay, so this first one is rather silly, but it goes along with the theme of the night. Besides, at least Jerry wouldn’t be caught dead wearing a Yankee hat and rooting for the Yankees, not like Chris Rock and that fraud John Leguizamo. And at least he threw a strike on the first pitch which would have probably been more useful than anything Edwin Diaz and Jeurys Familia threw tonight. But more on that later.)

Next, I’m blaming Todd Frazier. Second inning, he gets caught stealing. Fine. But he immediately pops up and implores the dugout to call for replay. Now, Todd is a respected veteran so if he does this immediately, it would have been an egregious error, right? As it turns out from replay, the difference was maybe millimeters … not enough to overturn. Okay, so next I blame whoever is in the video room involved in the checks and balances system of video replay who saw that replay and told Mickey Callaway that it was a good idea to challenge the call. And I blame Mickey too. It’s the second inning with two outs for crissakes. Maybe not the best time to call for replay on a play that was decided by millimeters?

So that’s all hindsight because who thinks that a burned challenge in the second inning is going to come back to bite a team? Well when that team is the New York Mets, the dogs are hungry and they have sharp teeth. So you had to know that even after Pete Alonso hit a moon scraper and then followed it with a double to drive in Jeff McNeil to give the Mets the lead the Mets were in trouble. You just didn’t know where that trouble would come from. Alas, it came from that dopey review.

deGrom was stellar after the first pitch home run, but then in the 7th, he walked Rhys Hoskins and gave up a double to J.T. Realmuto, who had come into the game with a career OPS of .261 against deGrom. (Not average … OPS!) Fine. He got Jay Bruce to ground out to third base for the first out. Cesar Hernandez hits a topper to Frazier who flipped it to home plate just a little too late to get Hoskins, who tied the game. Except that Hoskins slid with his feet up and the tag was actually applied before Hoskins even touched the plate. The call was safe, understandable considering the angle that Brian Gorman had as the home plate ump. But upon seeing the replay, it was a much more egregious miss than Todd Frazier’s stolen base in the second f***ing inning!

But hey, the Mets had no challenges left because Frazier was so damn sure he was safe in the second inning, so they were screwed. And this is where I blame Gorman. Not because he missed the call, but because he wouldn’t initiate a crew chief review on a run scoring in with one out in the 7th inning, which if there was any time to initiate a crew chief review, you would think that would be it, right? How many times do you remember Terry Collins arguing with an umpire because they granted a crew chief review to an opposing team who had no reviews left? More than once, I can guarantee you that.

Now what you read above was me ranting about stupidity that was all for naught anyway. Because now I blame Edwin Diaz, and the general manager that traded for him. Diaz was the shutdown closer good enough to trade the number six pick in the 2018 draft for. And he gave up the lead in seven pitches. And gave it up to Jay Bruce who he was traded for of all people please for the love of God just kill me now!!! Diaz wound up getting one out because his slider was so flat that he had to be removed for Jeurys Familia, who gave up all of Diaz’s runs plus one of his own, and Familia could only get one out. It took three relievers to get three outs … the first two being part of BVM’s master plan to upgrade the bullpen. Is this why Dave Eiland was fired, exactly?

Tomorrow is fireworks night at the ballpark. If there’s a God, one of those fireworks will burn down the damn parking lot just like the minor league team tried to do in Florida. and we won’t have to endure this suffering anymore.

But failing that there’s Sunday, when the first 25,000 fans get humanely euthanized.