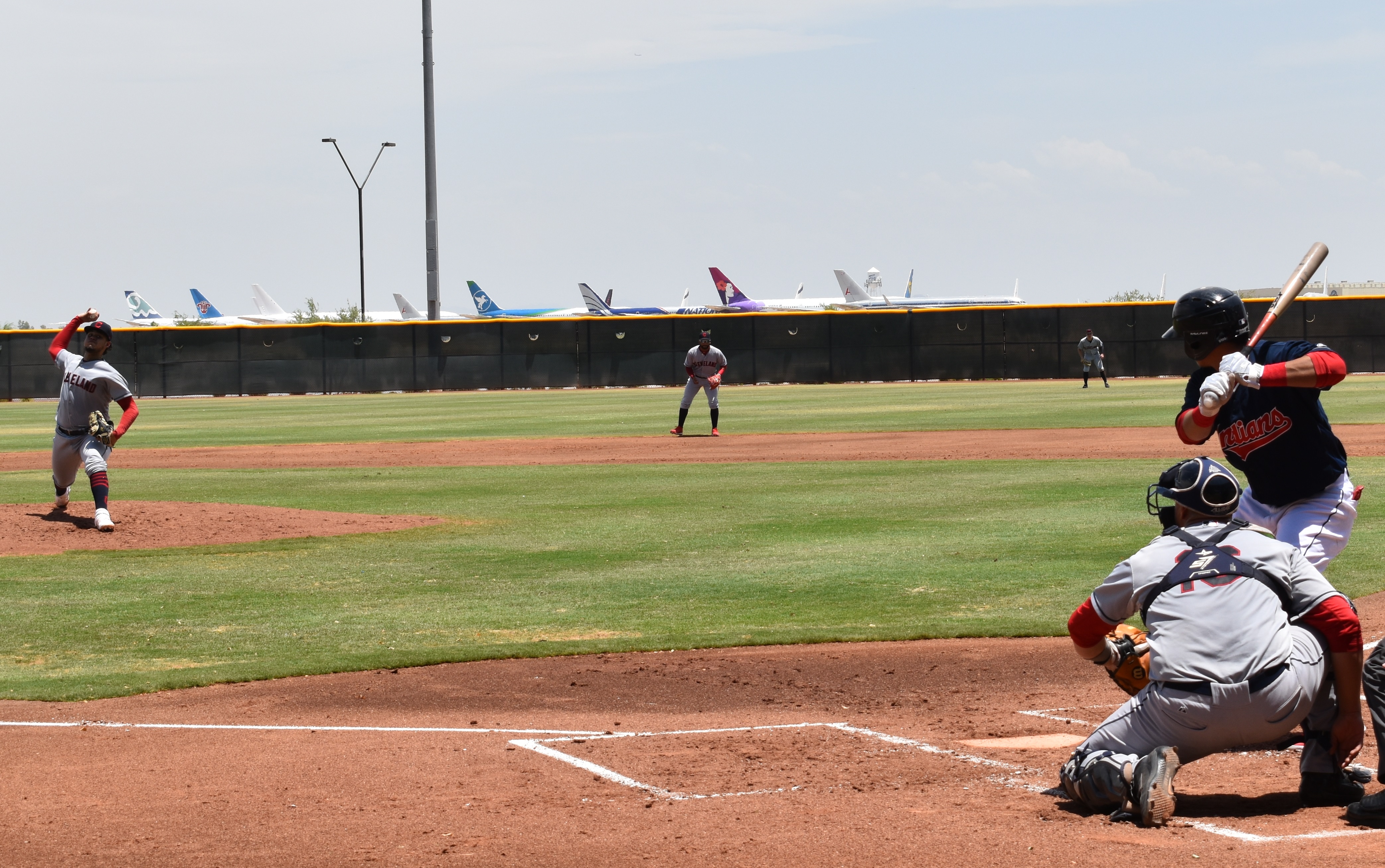 It was a short week for the Arizona League Indians Red as they had two days off in the middle for the MLB All-Star break and two of the games they did play were against their in house rivals, the Indians Blue.

The week started out with a tough loss against the Dodgers Lasorda last Saturday. Allan Hernandez (12th round pick in 2019) made his professional debut and walked all four batters faced, all of whom eventually came around to score. While these runs came in against the rehabbing Jake Miednik, the Scrappers reliever didn’t allow any of his own runs and just two hits in two innings.

The Indians weren’t able to make up the ten run deficit that had accrued by the fifth inning, but they kept things going consistently on offense throughout with eight walks and five runs. Marlin Made had the offensive game of the night with his first AZL home run along with a single and two runs scored.

On Sunday, it was the first Red vs Blue game of the season. I recapped this game from the Blue side earlier in the week, but neglected the Red performances. Cesar Idrogo had one of his best games of the season with two hits (one double), three RBI and a couple nice plays defensively in left. Yainer Diaz added three hits as well as he continued his torrid start.

Juan Zapata started this game and earned the loss despite allowing just one earned run through five innings. Samuel Vasquez followed him with a rather disappointing appearance that featured three runs allowed in two innings.

Team Red had some revenge against Dodgers Lasorda on Monday, winning 9-5 at home. Three players had multi hit games including the rehabbing Max Moroff with three and both Yainer Diaz and Gaspar Palacio hit home runs. While Diaz has been hitting for power all season and this was his fourth to leave the yard, it was the first in the US for Palacio and the second in his career. His last home run came in the Dominican Summer League in 2017.

Wardquelin Vasquez struggled in this start and was removed early after walking five in 1.1 and the immediate relievers weren’t much better. Kevin Coulter had the best game of all the pitchers used, going two perfect innings and striking out two.

After a short break, the Indians restarted their season against the Royals on Thursday night. The offense was rather tame, but the regular performers were on top again as Diaz hit a double and Made hit his second home run of the season leading to a 3-1 win. On rehab assignment, Clark Scolamiero went 0 for 2 and Yeffersson Yannuzzi pitched 0.2 innings in relief. Yannuzzi walked one and allowed two hits, but managed to avoid allowing a run.

Indians Red used seven pitchers to get through the game, but again Coulter was the standout, striking out five without a walk or run allowed in 2.2 innings. With the win, the Indians moved into a four way tie with the Royals, Mariners and Dodgers Mota for third place in the AZL West.

The Indians Red wrapped up the week with their second game against Blue. This times, things weren’t nearly as close as Blue blew away Red to win the game and the season series. The biggest news for team Red in this game was that first round pick Daniel Espino made his professional debut with a scoreless inning. Espino struck out one and didn’t allow a base runner. Because this wasn’t an extended look, it’s hard to say much about Espino beyond him having an electric fastball and a very effective breaking ball that was used a limited number of times. He was followed by Jhon Vergara, who didn’t have nearly the same success and allowed seven runs in 3.2 innings.

While Yainer did go 0 for 3 as the DH on Friday afternoon, he remains the top hitter in the Arizona League. I took a deeper look into his numbers earlier this week, but simply looking at his .437/.453/.690 slash line through 71 at bats is alarming enough. While he does walk rarely (he had his second of the season this week), he also almost never strikes out with just eight on the year.

While no one else on team Red is anywhere near Diaz’s level (Julian Escobedo on team Blue has, however, nearly equaled his performance), there have still been some players improving recently. Cesar Idrogo has seven hits in his last six games including two doubles and seven RBI.

Made had been off to a truly dreadful start, hitting .125/.146/.175 through his first 12 games, but has had six hits (including the two home runs mentioned and two doubles) in his last six. Made is an athletic outfielder who showed some power both in the DSL last year and extended spring training, but took some time to catch up to the increasing amount of older (college draft picks) talent in the AZL. Palacio has a similar story as he was hitting .189/.311/.405 prior to adding four hits in his last three games. With the homer and a double, he has increased his slugging percent to .450.

Since he warranted multiple mentions already, it should be noted that Coulter has been among the Indians top relievers at this level and now has 17 strike outs to four walks in 12.2 IP. Second season player Christophers Santana has also been successful with nine strike outs in nine innings without a run allowed this year.