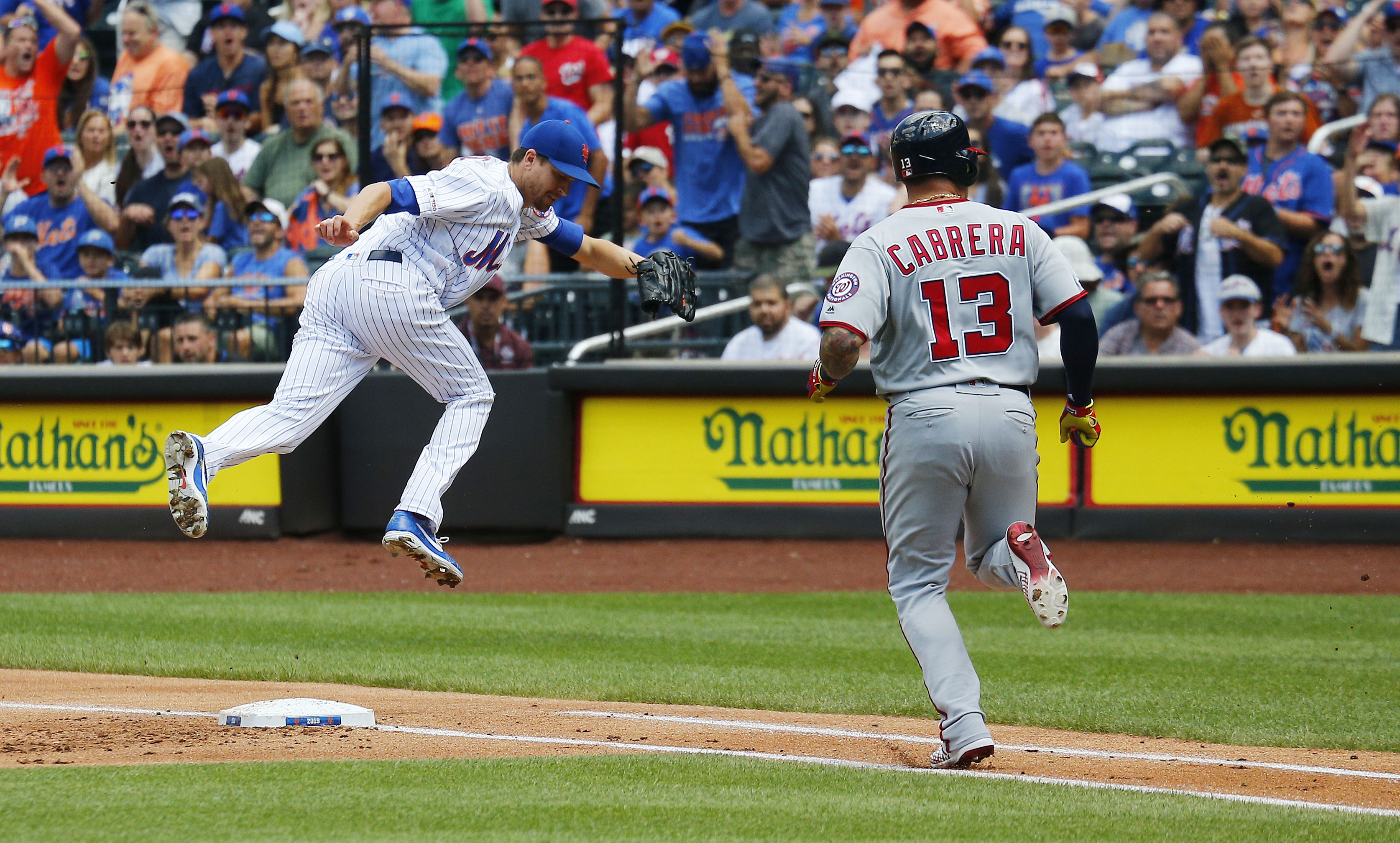 And that in itself is okay. The Mets took two out of three from the Nationals, keeping themselves on the road map that I had set for them back on August 1st. At 61-57, they’re a game and a half back of Washington for the first wild card spot, and while they missed an opportunity to leapfrog over Milwaukee (who lost) and St. Louis (who are losing by four right now), the Mets are still right on their tails.

What hurts about the 7-4 loss to the Nationals is that it could have been totally prevented. The three runs the Nats scored in the first were unearned as they all came around on a failed 3-1 putout. Pete Alonso made a diving stop on Asdrubal Cabrera’s grounder, but threw it just a little bit too far ahead of Jacob deGrom covering. deGrom, for his part, stopped on his route to the bag briefly which messed up the timing. Two runs scored on that, and then after deGrom chased down the ball and threw a short hop to Wilson Ramos, the ball squirted out of Ramos’ glove and Juan Soto, who would have been out by a mile, scored.

(Editor’s note: I take partial responsibility for this as the Mets hat I have worn this entire week was not on my head during the top of the first. I have to be better.)

The Mets tied the game in the second as Joe Panik drove in a run with a single. Then after deGrom laid down a sweet bunt for a single, Jeff McNeil tied the game with a two run double. There was hope that the disastrous play from the first wouldn’t matter. But Cabrera lined a double to right off Justin Wilson to bring two more runs home. The Mets had a chance in the bottom of the seventh after McNeil doubled and was brought home on a sac fly by Michael Conforto. But with one out J.D. Davis was called out on a borderline high strike, and Wilson Ramos hit a line drive too hard … thus it was caught by Gerardo Parra to end the threat.

The good news is that Jeurys Familia pitched a clean eighth and struck out the side. The bad news is that Edwin Diaz did not pitch a clean ninth as Victor Robles deposited a slop slider into the left field seats to make it 7-4. And no, the Mets did not get to Sean Doolittle again today as 7-4 was the final score. Diaz’s struggles are what is going to hold the Mets back from serious contention for both a playoff spot and even the division title if you want to dream big. Seth Lugo wasn’t available today after pitching two innings last night and Diaz already seems like he’s Closer B at this point. It’s time for even that moniker to be rethought.

Sad flight to Atlanta … a flight that probably won’t feel like soaring to the people on board after the Sunday sloppiness. But the truck is still on the road to the playoffs. Three in Cobb County will continue to tell the story. The Braves split a four game series against Miami so they may be ripe for the picking with Austin Riley on the DL (and who was slumping even before that.) One game is realistic. Get to their bullpen and two is a possibility. But you gotta get one before you can get two.

And I’ll keep my hat stapled to my head.