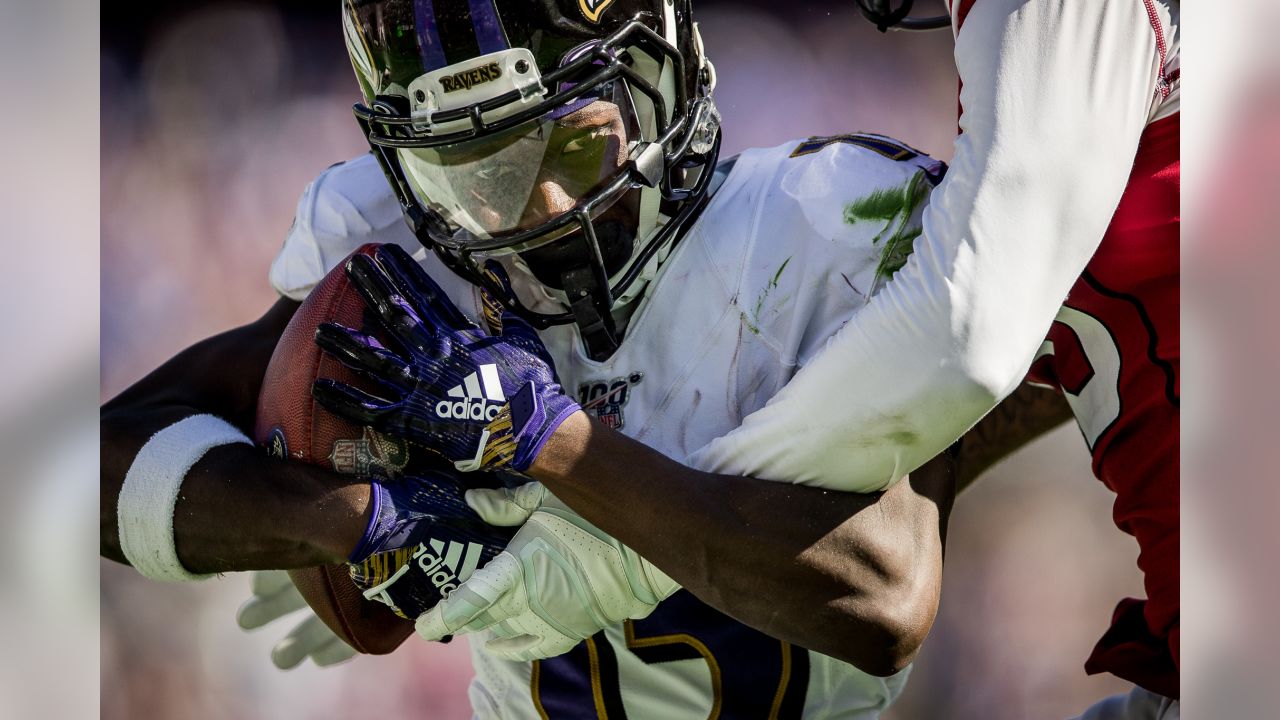 Per Clifton Brown of BaltimoreRavens.com:

“As the Ravens defense chased Arizona Cardinals rookie quarterback Kyler Murray, it felt familiar. Something like the way it feels chasing Lamar Jackson in practice, trying to minimize the problems caused by his arm and his mobility.

“The Ravens prevailed Sunday, winning a hard-fought 23-17 decision. But Murray – the No. 1-overall pick in this year’s draft – had his moments against Baltimore, completing 25 of 40 passes for 349 yards in his first NFL road game.

“Murray only rushed three times for four yards, but he completed many passes despite tight coverage by the Ravens, and he bought more time to throw with his mobility.

“Facing Murray was good prep work for the Ravens, who have the challenge of an elite, athletic quarterback next week when they travel to Kansas City to meet Patrick Mahomes. It won’t get any easier against Mahomes and the Chiefs, who will test exactly where Baltimore stands defensively.

“Asked what it feels like as a lineman trying to contain mobile quarterbacks who can improvise, Ravens defensive tackle Michael Pierce said, “It’s not fun. Murray is an amazing athlete. He made a lot of throws, and that’s something we’re definitely going to see next week that we need to correct. It’s something you have to be aware of when you rush, and when you cover. Going against Patrick Mahomes, we have some work to do.”

While Murray had impressive numbers Baltimore’s defense was strong in the red zone, forcing Arizona to settle for three field goals through the first three quarters. David Johnson scored Arizona’s lone touchdown on a one-yard run in the fourth quarter, but Ravens safety Earl Thomas said the Ravens had answers for the Cardinals once they got close to the goal line.

“Kyler did a great job of scrambling when he needed to, but the pressure at the end kind of fazed him,” Thomas said. “They had some good scheme plays and they timed them up perfect. I think it’s more on the coordinator than Kyler. The tempo worked pretty good for them. They kept the pressure on us, guys were scrambling trying to hear the calls.”[quote]

Baltimore’s pass rush also put consistent pressure on Murray with three sacks and nine quarterback hits, and he would have been dropped more if not for his mobility.

Matthew Judon and cornerback Brandon Carr each had one sack, while Pernell McPhee and Patrick Ricard combined for a sack. Pierce felt thankful the Ravens got the win, and said it was easy to see why Murray was the top pick in the draft.

“He’s an amazing athlete, the guy has a rocket arm,” Pierce said. “You can’t coach the kind of stuff that kid does. Thankfully, we did enough to get the win.”

Meanwhile Ravens rookie receiver Marquise “Hollywood” Brown continued to build off his standout Week 1 performance with a strong showing in the home opener, including a 41-yard catch to seal Sunday’s 23-17 victory over the Arizona Cardinals.

Brown, who’s seemed supremely confident and prepared for the big stage since the Ravens took him with the 25th-overall pick, spoke about the big play like it was just par for the course.

“Lamar threw a great pass. I couldn’t ask for a better ball,” Brown said. “All I had to do was hold my position and make a big play. I saw it in the air, I was like, ‘This is money right here.’ I couldn’t mess that one up.”

The Ravens were clinging to a six-point lead, but the Cardinals had hung around late into the fourth quarter. Baltimore certainly didn’t want to punt the ball back to rookie quarterback Kyler Murray, who already had 349 passing yards on the day.

The Ravens considered playing it safe and running the ball on that third-and-11 with 3:05 remaining, but ultimately decided to go for the big play.

“We’ve got to get the first down and there’s a man covering him, no safety help over the top, and he ran a great route,” Jackson said. “I just had to make a great throw. He came down with the catch. It just put us in the best position to win the game and that’s what it was.”

“For Marquise to go up and make that play, it’s incredible,” said tight end Mark Andrews, who played with Brown at Oklahoma. “It’s a huge play. That can’t be overlooked, especially as a rookie going up and making that play and sealing the game for us.”

Brown’s immediate impact has been somewhat surprising considering the uphill road he had to take after suffering a serious Lisfranc foot injury in his final college game. He couldn’t even run full speed until just before training camp, and the Ravens eased him into action throughout the summer. Brown still says he’s not at top speed.

But he’s quickly established himself as the team’s top receiver. His breakaway speed is immediately evident, but he can also work the underneath routes like he did against the Cardinals. He finished the game with eight catches for 86 yards.

“He has special hands, no doubt about it,” head coach John Harbaugh said. “He can track really well. It’s not just that he can run fast. He’s a receiver.”

Brown has been a game-changer for Baltimore’s offense through the first two games. He’s provided a much-needed deep threat for Jackson, and his role looks like it’s just going to continue to grow throughout the year.

“You take plays and you make plays,” Harbaugh said. “You also create plays. I think in that situation between Lamar Jackson and Marquise Brown … [the Cardinals] had pretty good coverage right there. They made a big play. They made a play in a critical situation. That’s something that, man, that’s pretty special.”