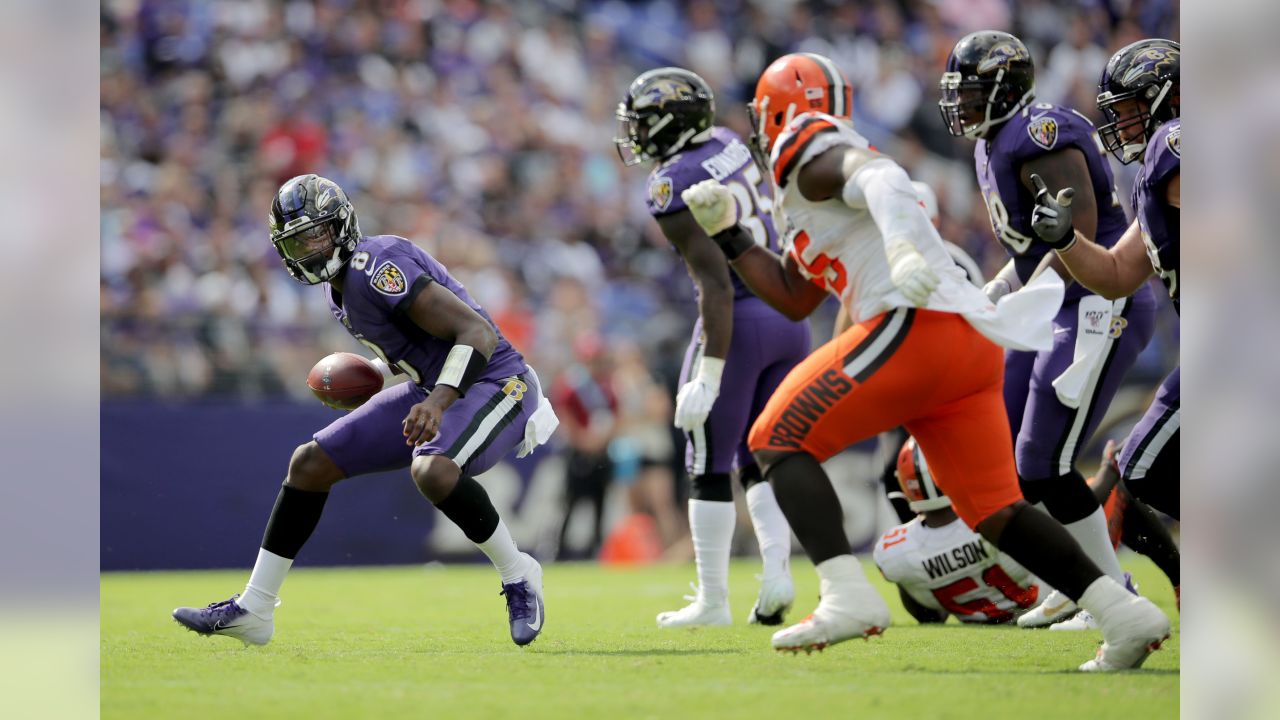 So much for the Ravens’ claim to a great run defense…or any semblance of communication or coordination on defense at all. While Lamar Jackson did not have a very good day, as Cleveland figured out a way to bottle up his lateral escape routes, it was the Baltimore defense that was a bust on Sunday.

The 530 yards of offense allowed Sunday to Cleveland was the fourth-most in franchise history. The 40 points allowed are the most since London in 2017.

The Browns did it all on a day when Odell Beckham Jr. – one of the best wide receivers in the NFL – had just two catches for 20 yards as he was blanketed by cornerback Marlon Humphrey.

Other than that, there weren’t many positives from the performance.

Browns quarterback Baker Mayfield threw for 342 yards and running back Nick Chubb ran for 165 yards and three touchdowns. Wide receiver Jarvis Landry caught eight passes for 167 yards before he left the game in the second half with a concussion. Even tight end Ricky Seals-Jones had a 59-yard catch and run.

The Ravens struggled to get to Mayfield – sacking him on the game’s opening drive (Tyus Bowser) and then not again. DC Wink Martindale tried to dial up blitzes from every angle, but none of them got home.

Without big man Brandon Williams, who was a late addition to the injury report with a knee problem, in the middle, Baltimore’s defense was run over. After the Ravens pulled to just six points down in the third quarter, Chubb got loose for an 88-yard touchdown run – untouched – on the next play from scrimmage, changing the tenor of the game.

Williams’ absence certainly hurt, but it wasn’t a problem just up the middle. The Ravens, who are relying on younger outside linebackers after the departure of Terrell Suggs, have been gashed along the edges and Chubbs’ long touchdown was on a toss play to the outside.

“We had a young guy in there; we did not set the edge,” defensive tackle Michael Pierce said. “We’ve got some new parts that need to gel immediately.”

Blown coverages left receivers wide open in the secondary for huge gains. The worst was a 59-yard gain by Seals-Jones to set up a touchdown on the next play. Jefferson said it wasn’t a problem with communication, as they cited the past two weeks.

Head coach John Harbaugh said it comes down to executing the calls.

Humphrey took the blame for one of the coverage busts, seemingly the one to Seals-Jones, saying he did well in man-to-man coverage but wasn’t good in different zone coverages.

Safety Earl Thomas III, who was brought to Baltimore to shut down deep plays and get turnovers, has been in chase-mode too often so far. He said Sunday’s mistakes were a continuation of a problem in how Baltimore is handling throws down the seam.

“We’re just not reacting right to the different concepts that they’re giving us,” Thomas said. “The glaring thing is the seam throws. We understood that those are [Mayfield’s] best throws. We just didn’t react to the concept like we needed to.”

Tackling was also uncharacteristically bad, as multiple players bounced off Landry on a short catch that turned into a 65-yard gain and set up a touchdown.

Add it all up, and it’s not a pretty picture for a proud defense. It’s still early in the season, but the Ravens know if they don’t get things corrected quickly, it could be a long season on defense.

“We’ve just got to clean it up and guys do their job. Simple as that,” Ravens coach John Harbaugh said. “We’re not doing our assignment the way we’re supposed to, too many times, and it’s costing us big plays.”

Mayfield hit Landry for 65 yards and connected with Ricky Seals-Jones for 59. Then, of course, there was that 88-yard run. In all, the Browns had 10 plays of at least 16 yards.

Jackson got the Ravens to 24-18 with 9:51 left before Chubb took a pitch deep in his own territory, burst through a hole on the right side and ran untouched into the end zone.

“Anybody could have run through that hole,” Chubb said.

A subsequent fourth-down gamble by Baltimore failed before Jackson threw successive interceptions . The first one ended a run of 248 passes without being picked off.

Down 17-10, the Ravens were moving for the potential tying score when Mark Ingram had the ball pried loose by Jermaine Whitehead, and Chad Thomas recovered at the Cleveland 26. It was Baltimore’s first turnover of the season.

The Browns immediately went the other way and grabbed a two-touchdown advantage late in the third quarter with a 2-yard run by Chubb.

Beckham and Ravens cornerback Marlon Humphrey tangled several times during the game and got into a heated scuffle in the third quarter. Beckham threw a punch and Humphrey choked him after they wrestled to the ground. Both players were penalized.

“I ran to him after the game, apologized,” Humphrey said. “That’s not really the brand of football I really want to represent. When the whistle blows, it’s got to be over with.”

INJURIES—- Browns: Starting CBs Denzel Ward and Greedy Williams were inactive with hamstring injuries for a second straight week. … LB Willie Harvey left in the first quarter with a shoulder injury and did not return.

Ravens: DT Brandon Williams (knee) was placed on the inactive list after struggling during a pregame workout.