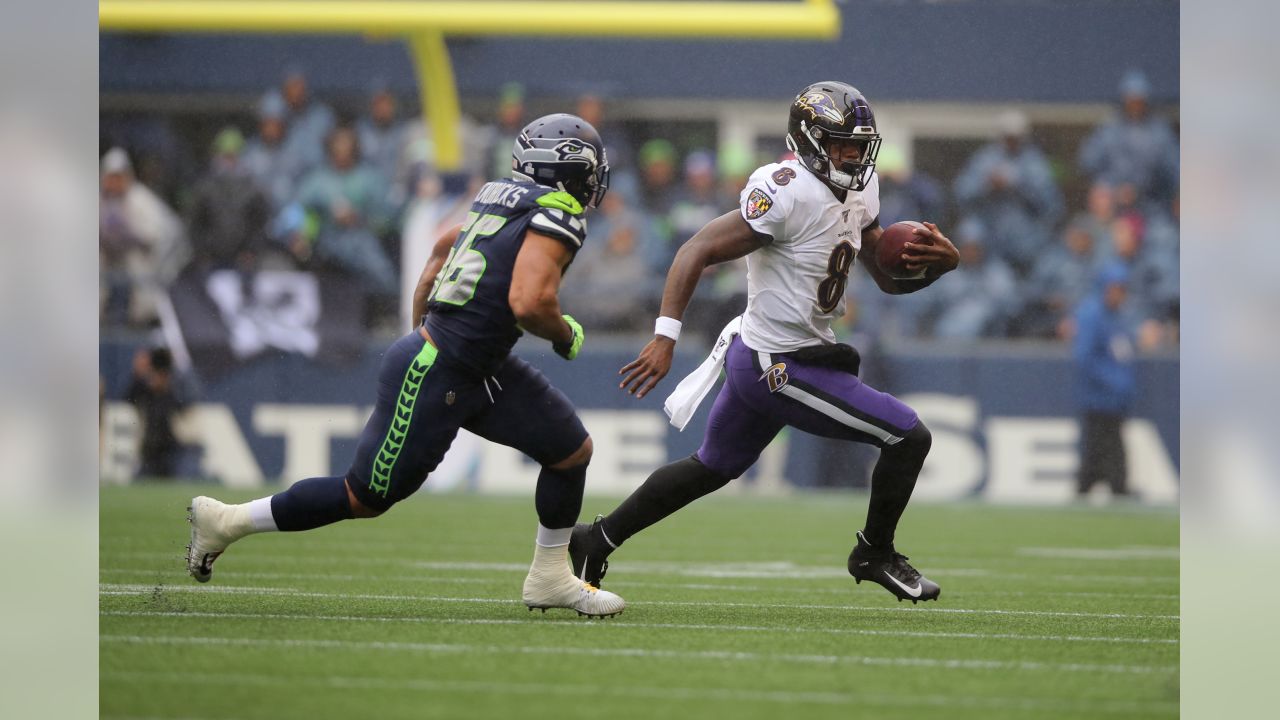 I previewed this game by saying Russell Wilson would show Lamar Jackson how the mobile QB thing works in the NFL. I did not expect the student to outplay the teacher.

Running an old-school power play, Jackson rolled in on an 8-yard TD on a crucial fourth-down call. It gave the Ravens the lead for good on their way to a 30-16 win over the Seattle Seahawks on Sunday.

Whether it was scrambling away from trouble or designed runs to use his speed, there was no stopping Jackson. He was the best player on the field, outshining Seattle QB Russell Wilson on a day the Seahawks star finally made his first critical mistake of the season.

Jackson was especially good in the second half, when he led Baltimore on a pair of crucial scoring drives. He finished with 116 yards rushing and his TD run, 143 yards passing and one of the more impressive victories in his young career.

“I always wanted to play against Michael Vick. I guess I’m getting the new era with Lamar Jackson right there,” Seattle defensive end Jadeveon Clowney said.

Earl Thomas made his return to Seattle after nine seasons of playing for the Seahawks, but aside from some occasional barking at the sideline of his former team and running off the field twirling Wilson’s jersey over his head after the victory, the former All-Pro safety ceded the spotlight to Jackson.

The second-year QB gave the Ravens (5-2) a 20-13 lead on his TD run. On their next possession and backed up deep in their own end, Jackson made a series of highlight plays to drive Baltimore into scoring position for Tucker’s fourth field goal and a 10-point lead with 3:47 left.

Jackson had a 30-yard run on third-and-8 from the Ravens 12. He scrambled 13 yards for another first down and hit tight end Nick Boyle for a 20-yard completion to get the Ravens inside the Seattle 10. Baltimore went 86 yards in 13 plays and ate 9 minutes off the clock.

Jackson completed just 9 of 20 passes on a cold, wet day in the Pacific Northwest. He was hampered by several drops and could have had an even more dynamic performance running if not for footing problems on the wet turf. Jackson changed his shoes twice, eventually going back to his original pair.

“The other ones I put on, the screw-ins, I was running slow … getting caught by the linebackers,” Jackson said. “I’m like, `I got to go back to the original ones because there’s no way I can’t get caught by no linebackers.’ I got mad.”

While Jackson was great, he was helped by a defense that held Seattle to three points in the second half and capitalized on two turnovers.

Wilson was nearly flawless for the first six games but struggled to find open receivers against Baltimore’s physical secondary. Seattle (5-2) was leading 10-6 and driving when Wilson made the mistake of double-clutching and trying to throw late into the flat. Marcus Peters, traded to Baltimore less than a week ago, made a quick break on the throw, stepped in front of Jaron Brown and outraced Wilson 67 yards for his fifth career interception return touchdown, the most of any player since Peters entered the league in 2015.

Wilson was 20 of 41 passing for 241 yards and an 8-yard TD in the first quarter to Tyler Lockett. Seattle’s last hope of a comeback ended when DK Metcalf fumbled and Marlon Humphrey returned it 18 yards for a touchdown with 3:37 remaining.

“Somewhere you have to make a mistake,” Seattle coach Pete Carroll said. “How many games are you going to go without making an error like that?”

INJURIES: Baltimore defensive end Pernell McPhee suffered an arm injury in the first half and did not return.

The Ravens were without starting wide receiver Marquise Brown and linebacker Patrick Onwuasor, and top cornerback Jimmy Smith. Brown and Onwuasor both have ankle injuries, while Smith has a knee injury.