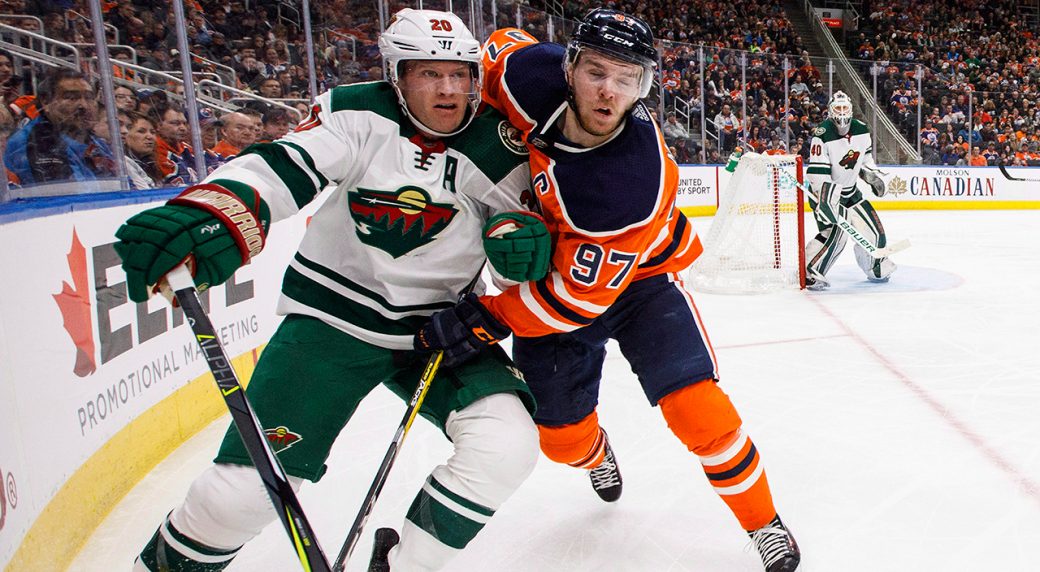 Connor McDavid was held pointless for the second game in a row on Sunday night. Only once has he gone three straight games without a point in his illustrious career. Can he avoid a second ‘drought’ tonight against the Wild? It’s the first of three meetings between the teams this season.

Mike Smith starts for the Oilers, while Devan Dubnyk gets the nod for the Wild.

Edmonton: Play a speed game. The Oilers have done a good job of playing quicker this season, which has allowed the offense to thrive in the early going. The Wild are a slower team that, quite frankly, isn’t very good. If the Oilers attack with their speed and skill, they’ll create ample chances in this game.

Minnesota: Keep that same energy. The Wild finally looked like a competent team on Sunday in their victory over the Canadiens. They’ve struggled mightily to start this season, but on Sunday they were highly motivated and brought a level of desperation we haven’t seen this season. They’ll need to be ready for this one.

Edmonton: Connor McDavid, as mentioned above, has gone three straight games without a point in his NHL career just once. It’s hard to imagine him doing that again tonight. McDavid will be highly motivated against a weak Wild team. I wouldn’t be surprised if McDavid has one of those nights tonight.

Minnesota: The Wild made a big investment in veteran forward Mats Zuccarello this past July. Zuccarello, a former Ranger, combines speed and skill to make a useful top-six forward. He’s always given the Oilers trouble. Don’t expect that to change in this game, his first back from a stint on the IR.

There will be no lineup changes tonight for the Oilers based on the lines at morning skate. Sam Gagner and William Lagesson remain healthy scratches, while Joel Persson sits with a concussion. Adam Larsson (leg) and Joakim Nygard (ribs) are both on the IR.

Mats Zuccarello, Ryan Hartman and Gabriel Dumont are the three new forwards in the Minnesota lineup. The Wild return largely the same group that missed the playoffs a season ago. They are hoping health will give them better fortunes.

Once a house of horrors, the Edmonton Oilers have enjoyed success recently in Minnesota. The Oil are 3-1-1 in their last five at Xcel Energy Center, collecting seven of a possible ten points. The Oilers won the season series 2-1-0 last season, outscoring the Wild 14-7 in the process.

Connor McDavid has been held without a point in three straight games just once in his NHL career. That came during the 2017-18 season, when McDavid failed to register a point from December 29th – January 2nd.

Edmonton’s 7-1-1 start is the fifth best in franchise history. The Oilers, who have 15 points, currently sit atop the Pacific Division and are tied for first in the Western Conference. The last time the Oilers won eight of their first ten games? 1985-86. The Oilers started that season with an 8-2-0-0 mark.