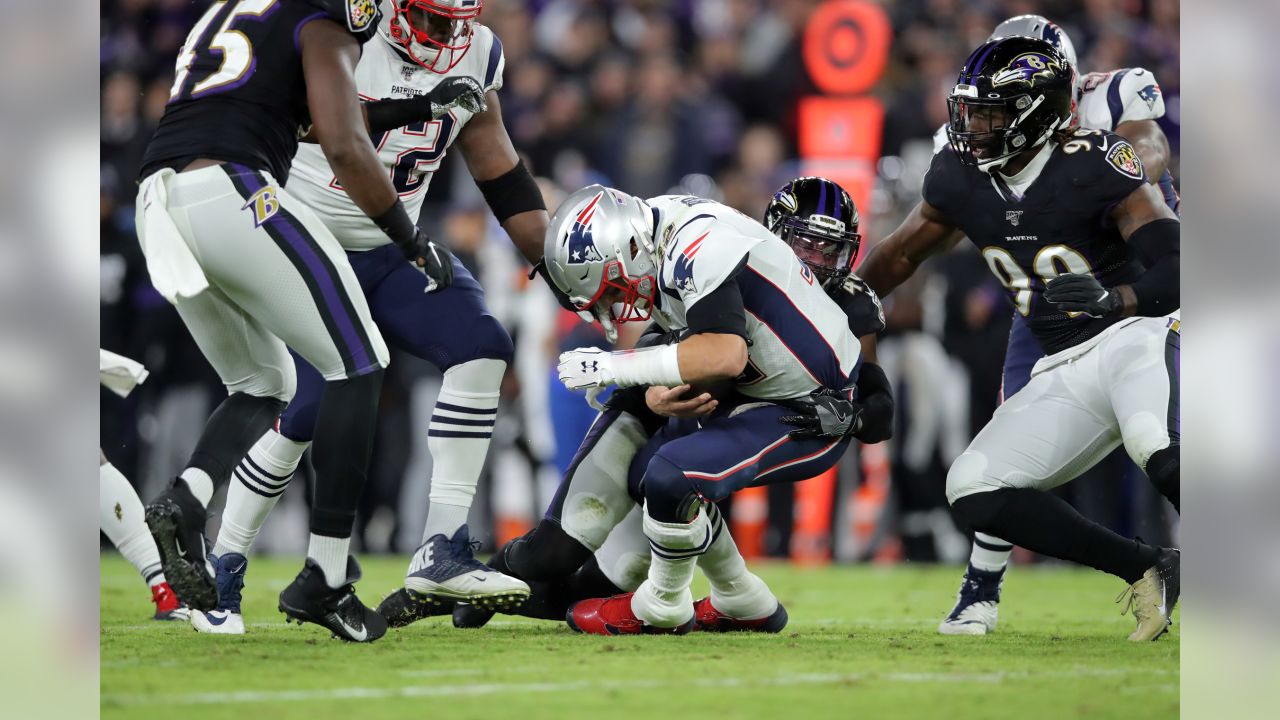 Somehow the Ravens survived their own charity after giving the ball back to Tom Brady on turnovers. But not even Tom Terrific could overcome a night when Greg Roman’s pistol-formation offense was cooking for the Ravens.

The New England Patriots‘ unbeaten season crashed to an end under the weight of their own mistakes and inability to contain Baltimore Ravens quarterback Lamar Jackson, who ripped apart the NFL’s stingiest defense with his arm and legs in a 37-20 victory Sunday night.

Baltimore (6-2) zipped to an early 17-0 lead and let the Patriots (8-1) creep within striking distance before quelling the comeback with a 70-yard fumble return by Marlon Humphrey and a 5-yard touchdown pass from Jackson to Nick Boyle early in the fourth quarter.

Jackson then led a methodical 9 1/2-minute drive that ended with his thrust into the end zone from the 1.

Jackson, the slick second-year quarterback, ran for 61 yards and two touchdowns and went 17 for 23 for 163 yards and a score. Mark Ingram ran for 115 yards, and the NFL’s leading rushing attack amassed 210 yards on the ground.

New England mixed up their coverages and blitz packages, and the Ravens responded accordingly.

“Nobody does it better than they do, and I thought our guys handled it really well, starting with the quarterback,” Ravens coach John Harbaugh said.

The Patriots came in with a defense that had allowed only 7.6 points per game and forced 25 turnovers for a plus-17 differential. The defending Super Bowl champions picked up two fumbles, but they had two turnovers themselves and committed a costly penalty that contributed to Baltimore’s first touchdown.

“We didn’t do anything well enough to deserve to win,” Patriots coach Bill Belichick said. “We’ve all just got to do a better job.”

Baltimore’s defense played a role, too. Patrick Onwuasor stripped the ball from Julian Edelman in the third quarter and Humphrey took it the other way for a score. Although Brady answered with a touchdown of this own to make it 24-20, the Patriots would not get closer.

And so ended New England’s 12-game winning streak, dating to last season and including the playoffs.

“We did a lot of things we need to do better,” Belichick said, his voice barely louder than a whisper.

The Ravens opened with a crisp 75-yard drive in which Jackson went 4 for 4 for 41 yards and New England extended the march with an uncharacteristic mistake. As Baltimore lined up for a field goal try, Shilique Calhoun jumped into the neutral zone to give the Ravens a first down.

On the next play, Jackson skirted around left end for an easy 3-yard score.

After Brady went three-and-out on his first series, Baltimore rattled off another 11-play drive and added a field goal.

The third time the Ravens got the ball, a 53-yard run by Ingram set up a 12-yard touchdown burst by Gus Edwards to make the score a stunning 17-0.

New England punted again, and what followed for Baltimore was a deflating miscue let the Patriots back into it. Cyrus Jones muffed the kick, former Raven Justin Bethel recovered at the Baltimore 20 and Brady tossed a 4-yard touchdown pass to Mohamed Sanu.

New England added two field goals in the final 4 minutes of the half, the first of them after Ingram lost a fumble at the Baltimore 19.

“Here they come roaring back and we make a couple mistakes,” Harbaugh noted. “They made some mistakes, too. It was that kind of a football game.”