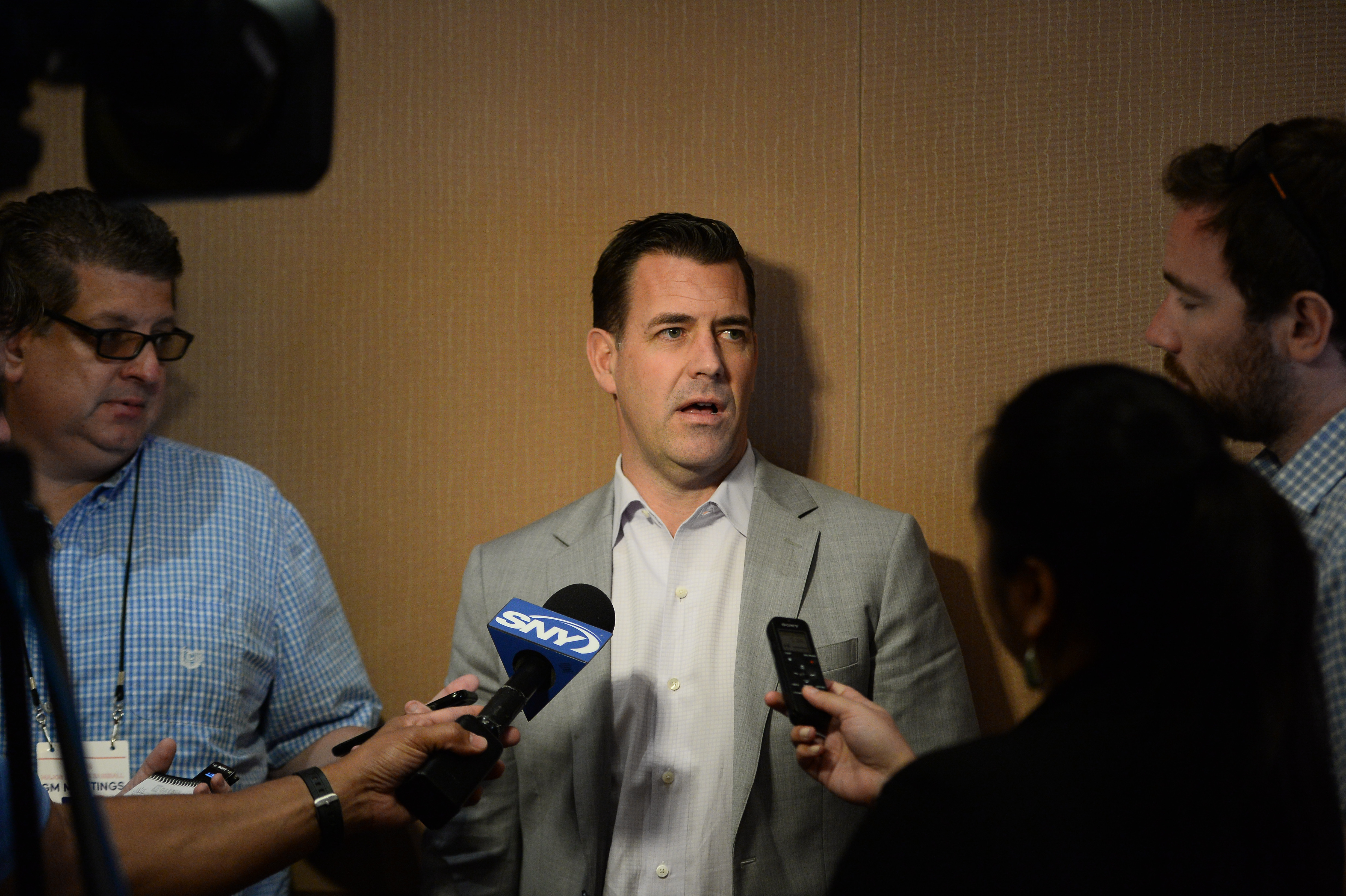 I’m not talking about any holiday. I’m talking about that time of year where we go through the stages of baseball acceptance. The part where we hope for big free agent acquisitions, the part where the Mets talk about being creative, the part where we ignore the franchise’s recent history and reason that “it’s still November”, before we finally reach acceptance and rationalization that Chasen Shreve can really be an important part of the bullpen.

The last two off-seasons has given us the added element of “what in the absolute f*ck is Brodie going to do?” Last season, it was because we truly didn’t know … and I’m not sure Brodie knew. This season, it’s to see how he’s going to combine the shadow of the Edwin Diaz trade setting fire to 2019 with the renewed efforts to be “creative”.

Brodie has said a lot of stuff during the recent GM’s meetings. It’s a lot of stuff about “oh, well we’ll be active in the free agent market and trades but we have players here that could do the job so we’ll be creative.” It all means everything and nothing at the same time. It falls right in line for the most part with what that Mets have done in free agency since 1993 left an indelible mark on the souls of the Wilpons. It means nothing because no general manager is going to tip their hand this early and Brodie has mastered the art of saying everything and nothing. So when Brodie says “we’re going to be creative”, what could that mean?

Last week, Brodie Van Wagenen said it’s “too early to tell” if Cespedes will play in 2020.

Now, we know Cespedes is taking BP — and it’s only November. pic.twitter.com/ekidPxuD7E

Consider the above video, which was posted and then deleted by Endy Chavez. He’s pitching to Yoenis Cespedes, who looks like he can move around a little bit and swing the bat a little bit. The problem is that the Mets would have probably preferred that Cespedes stay injured so they can collect that insurance money. So the video doesn’t help their case, right? It’s probably why Chavez deleted it. And it certainly doesn’t play into the narrative that “it’s too early to tell if Cespedes will play in 2020.”

Between this and the unnecessary deleting of the super secret (and suuuuuuper creative) Jerry Narron strategy, this team is proving great at mountain constructing using only molehills. But in this case, it’s the closest thing we’re going to get to proof that Cespedes is never going to play another regular season game with a Mets uniform on. I’m sure the Mets hoped to simply keep him in mothballs, send a doctor who is known for being “thorough” and finding an injury significant enough to collect on the insurance. So when Brodie talks about being “creative”, well … trading a guy who has had 478 plate appearances in the last three years but is now exposed by Endy Chavez as “healthy” for assets would take the most creativity ever.

So I’m going to propose a trade here … except it’s really not a trade proposal in the sense of most trade proposals you see which are “here’s a trade I dreamed up to improve our favorite club and screw the other team”. It’s more about trying to use the information and patterns we’ve gotten from the Mets front office in the past 20 or so years, and from Brodie in the past season. If there’s a trade involving Cespedes, there’s really only one “Mets type trade” that’s out there for Brodie. It all depends on whether the other team wants to pull the trigger as well, but I think what I’m about to unleash has a reasonable chance of happening. That’s not to say that this is necessarily a “good” trade, but a trade that both teams could spin as making sense.

In return, the Mets would receive:

Here’s Why The Mets Would Do This

Provided that Cespedes is deemed healthy enough to play and the Mets would have to spend the money anyway, they could take a player who has barely played and spin him into three players … two for the bullpen and a center fielder, which really isn’t necessary with Brandon Nimmo being able to play center, but he would at least provide a little depth once they realize that he might be more of a corner outfielder than a center fielder. Tapia can hit a little bit (.274 career AVG and .722 career OPS) so he becomes a cheaper Juan Lagares who hits lefty instead of righty.

As for the bullpen, obviously there were some issues last season.

So this is Brodie’s way of fixing the bullpen. I can hear the press conference now:

“Wade Davis and Bryan Shaw have been successful relief pitchers at the major league level. We believe that Davis’ and Shaw’s numbers in Colorado are outliers and that we can really help them find what made them great here in New York. We have a great new pitching coach who will help them achieve their former heights and we trust that will make a difference.”

Also, having these two relievers for the pen would give Brodie the excuse to slide somebody like Robert Gsellman or even Seth Lugo to the starting rotation. I think they would do it much sooner with Gsellman than with Lugo, but bringing in Davis and Shaw would give them the flexibility to do that. Plus, the extra money the Mets would take on with Davis and Shaw would be less than what they would spend on a fifth starter on the free agent market if they just decided to slide Gsellman in that spot, so as far as Jeffy’s concerned … win/win!!!

The Rockies have to be at least intrigued by the idea of Yoenis Cespedes’ power in Coors Field for 81 games. They may not be intrigued by Cespedes smoke filled lungs trying to huff and puff their way around the Coors Field outfield for 81 games, but if they can get rid of the onerous contracts of Davis and Shaw, they might be willing to take that chance. Tapia is expendable for them with David Dahl coming back, and it’s the small price to pay for getting a deal like this done.

According to the fine folks at Baseball Reference:

So the Mets would gain just under an extra $6 million overall, but it would be spread out over two seasons, which is pretty much a Mets thing to do. They deferred Bobby Bonilla’s money until the end of time, they turned Jay Bruce’s and Anthony Swarzak’s money into more money with Robinson Cano’s contract but it’s spread out over more time. They love that strategy and I wouldn’t be surprised if they went to that well again.

The Rockies would take their lump in 2020 with Cespedes’ contract but they would set themselves up to make moves in 2021 as they’d be out from under Davis’ and Shaw’s contracts. If Cespedes works out, perhaps they surprise for a wild card spot.

Certainly there are questions with this trade. Would the Mets only take Davis in a deal? Would they try to either restructure Shaw’s deal or perhaps try to convince Colorado to take Jed Lowrie’s contract instead of taking Tapia? For the Rockies, what do they do with Ian Desmond? His versatility would enable Colorado to move him somewhere else, or to a utility role, so a trade for Cespedes certainly remains possible.

So How Possible Is This … Really?

Well, considering the way most other rosters are constructed, this deal has a better chance of happening than a Yoenis Cespedes trade would with any other team. Nobody else has enough of a yearning for a big bat in a corner outfield spot to take on that contract sight unseen. The Mets wouldn’t pay him to play somewhere else. So if they wanted to rid themselves of Cespedes for its own sake, then a trade with the Rockies makes sense relative to a trade with most other clubs. They could make a trade with Detroit for Jordan Zimmermann ($25 million in 2020), but would the Tigers take a been there, done that attitude with Cespedes? My guess is probably not.

So that leaves the Rockies. They’re probably the one team that would at least listen. You might not like the deal, but that isn’t the point. The point is that I could absolutely see the Mets (and Rockies) doing something like this. Brodie would brag about getting two bullpen arms and an outfielder for somebody who hasn’t played since the middle of 2018, and the Rockies would be relieved to get rid of two bad contracts for somebody who can hit 40 home runs at Coors. I’m not going to guarantee it, but I’d keep an eye out for it this winter.