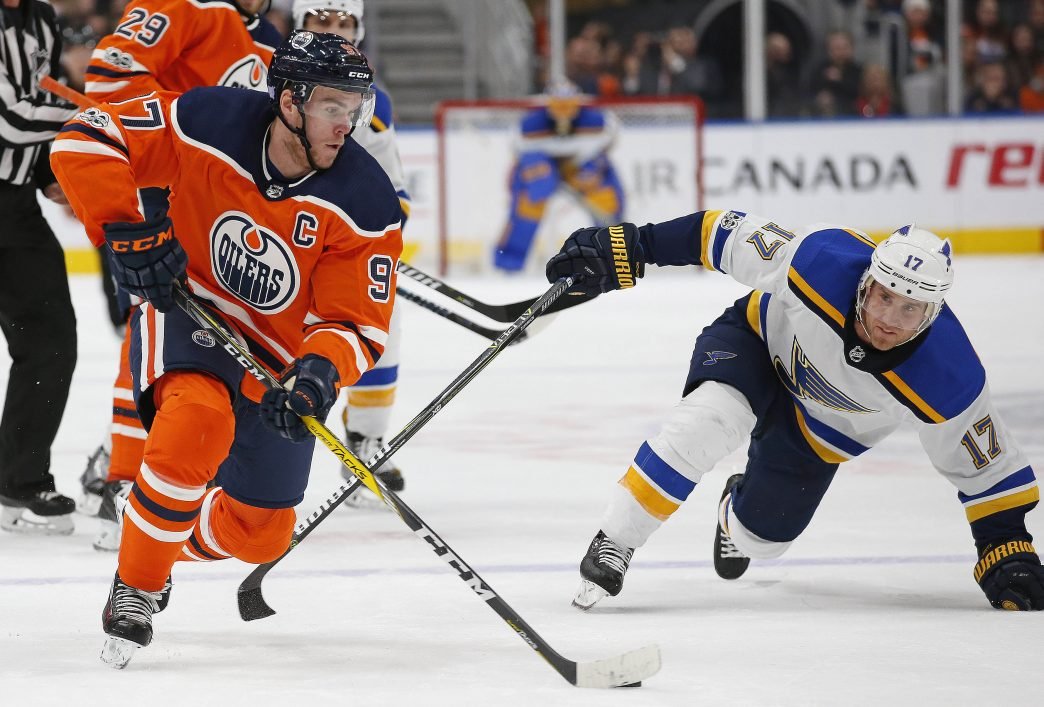 The Edmonton Oilers played well enough to win on Wednesday night against the Calgary Flames, but came up short in the shootout. The point was important, but leaves a bad taste in Edmonton’s month. Tonight, the Oilers get a chance to get back in the win column.

The Oilers are set to host the St. Louis Blues for the second time this season. It is the third and final meeting between the clubs this year. The Blues have won each of the first two games in regulation.

Mikko Koskinen starts for the Oilers, while Jake Allen gets the go for the Blues.

Edmonton: Stick to your game. The Oilers could have easily won on Wednesday, but ran into a hot goalie and got some bad breaks. They can’t get frustrated, because they did enough for the two points. Against a strong Blues team, the Oilers need to lock in and play their game if they want a chance to win. If not, it will be a long night.

St. Louis: Play heavy hockey. The Oilers have a lot of trouble playing a heavy and physical game. That is exactly where the Blues thrive. If St. Louis can come in and dictate the game physically, they should walk away with two points.

Edmonton: Caleb Jones returns to the Oilers lineup with Kris Russell on the IR. Jones will skate with Matt Benning on a pairing that actually had some success a season ago. Can Jones add an element of speed and puck moving ability to Edmonton’s back end? They’ll need it moving forward. This is a good test for Jones.

St. Louis: Without Vladimir Tarasenko, the Blues are lacking some serious skill up front. Jordan Kyrou has done a great job on the top line in his absence, however. Kyrou will skate there again tonight. I’ll be keeping my eye on this young forward who keeps impressing.

Kris Russell (concussion) and Joakim Nygard (hand) were placed on IR Thursday. Nygard, who had surgery already, will be out long-term. Tyler Benson and William Lagesson were both recalled but got into Edmonton late this afternoon. They’ll be tonight’s healthy scratches as Jones and Patrick Russell draw back in.

The Blues are still without Tarasenko (shoulder). They’ll be without him through the end of the regular season, but he could return during the Stanley Cup Playoffs. Oskar Sundqvist (lower body) is also currently on IR.

“We have to play our game,” Dave Tippett said this morning. “We want to play a real hard game also. Everybody does. You recognize who you’re against, but we like the way we’ve been playing lately. We also want to play a hard, playoff-style game. In a hard playoff race, we want to come in and play well.”

If the Oilers want to punch a ticket to the Stanley Cup Playoffs, they need to be better at Rogers Place. They have just 12 wins in 24 games, posting an overall record of 12-8-4. They need to win more games on home ice, especially down the stretch.

Connor McDavid currently sits at 449 career points. If he hits the 450 mark tonight, McDavid will be the 10th-fastest player in NHL history to reach the 450 point mark. Bet on him getting it tonight at home.