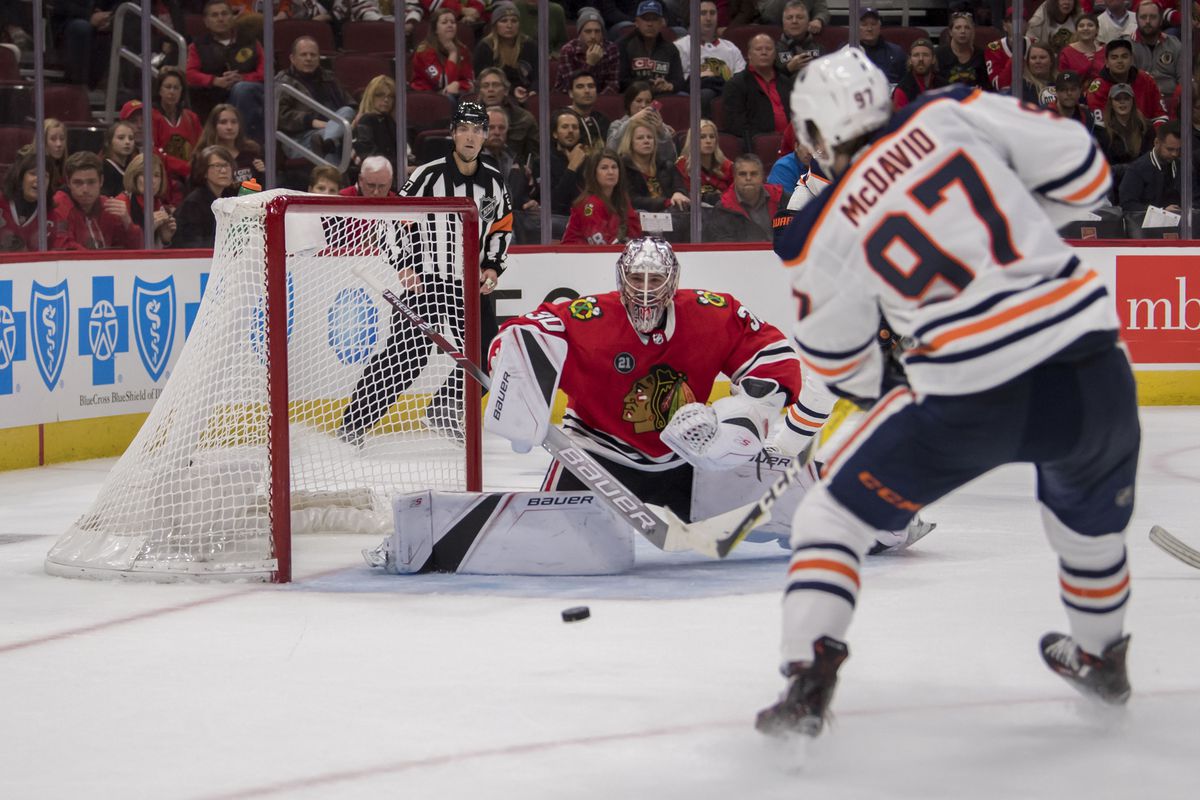 The Edmonton Oilers are set conclude a tough three game road trip over the course of four nights. They finish it in Chicago against the Blackhawks. It is the third and final meeting between the sides this season. They split the previous two battles, with the home team winning both.

The Oilers are coming off of a 2-1 overtime victory in Dallas against the Stars, while the Blackhawks crushed the Ducks 6-2. Both games were on Tuesday. The Oilers took the last meeting between these two, 5-3 at Rogers Place on February 11th.

Mike Smith gets the start for the Oilers, while Corey Crawford gets the go for the Blackhawks.

Edmonton: Better five-on-five pressure is key for the Oilers tonight. Edmonton was dominated in that game state on Tuesday night. The Blackhawks don’t have the depth or defensive ability that the Stars do. They’ll need to take advantage of that by playing a fast game and controlling the puck at five-on-five. There will be chances to score if Edmonton can pressure at five-on-five consistently.

Chicago: Clog up the neutral zone. The Blackhawks allow an NHL-high 35.6 shots against per game. If they want to slow down Edmonton’s lethal attack, they’ll need to clog the neutral zone and slow down their stars. Limit the controlled-zone entries and force Edmonton to play more of a dump-and-chase style.

Edmonton: James Neal was eased back in on Tuesday night in Dallas. Tonight? Neal is back with Connor McDavid. The veteran sniper will play with McDavid and Tyler Ennis. Can the veteran rebuild his chemistry with McDavid and break out of his scoring funk? He’s yet to light the lamp in 2020. He’ll get a great chance to do that tonight.

Chicago: Dylan Strome is hot right now. The pivot led the Blackhawks attack on Tuesday night with two goals and an assist in the victory over the Ducks. Strome anchors the second line for the Blackhawks and will have Patrick Kane on his wing. He’s a talented player with quite a bit of confidence right now. That’s dangerous.

The Blackhawks have been crippled by season-ending injuries to key veterans. Zack Smith (back), Brent Seabrook (shoulder, hips), Calvin de Haan (shoulder) and Andrew Shaw (concussion) are all out for the season.

The Oilers are absolutely rolling right now. They are 16-6-4 over their last 26 games and have a playoff spot within their sights. In that span, they have outscored their opponents by a 96-75 margin. This is the best hockey the club has played in years.

Ryan Nugent-Hopkins played his 600th NHL game on Tuesday night. Every one of those games has been as a member of the Oilers. How did he celebrate? He scored the club’s only goal in regulation, assisted on the game-winner in overtime and drew the penalty that set up the OT GWG.