When Don Shula was the head coach of the Baltimore Colts, the only ravens in town were the beautiful big black birds which gave Loch Raven Reservoir its name in the suburbs of the city.

But every older fan in Baltimore and Maryland remembers the impact he had on making winning a way of life for the hometown team. That goes for the ownership and organization of the Ravens as well.

Pro Football Hall of Famer Don Shula, a former defensive back with the Baltimore Colts who would lead the franchise to its third NFL Championship title as head coach before becoming the winningest coach in league history with the Miami Dolphins, has passed away at the age of 90.

Shula, a Grand River, Ohio, native, played collegiately at John Carroll University in Cleveland before being selected by the hometown Cleveland Browns, led by legendary head coach Paul Brown, in the ninth round of the 1951 NFL Draft.

In 1953, Shula was sent to the Colts as part of a historic 15-player trade. He would play cornerback for Baltimore for four seasons from 1953-56 before wrapping up his playing career with the Washington Redskins in 1957. In seven total NFL seasons, Shula would collect 21 interceptions and four fumble recoveries; he had two straight five-interception seasons with the Colts in 1954 and 1955.

But by 1963, the Colts came calling again, this time hiring Shula, then 33, as the then-youngest head coach in NFL history.

By the time he retired 32 years later after seven seasons with the Colts and then 25 seasons leading the Miami Dolphins, Shula would become the NFL’s all-time winningest head coach.

Shula that year earned his first-career NFL Coach of the Year award, while his quarterback (and former teammate), Johnny Unitas, was named the league’s Most Valuable Player.

The Colts would win 10, nine and 11 games the next three seasons — Shula and Unitas winning NFL Coach of the Year and MVP together once again in 1967 — before embarking on one of the greatest seasons in franchise history in 1968.

The team that year won a then-franchise record 13 regular season games, going on to defeat the Minnesota Vikings, 24-14, in the divisional round of the playoffs before knocking off the Browns, 34-0, to claim the franchise’s third NFL Championship title. The Colts would go on to fall to the New York Jets, 16-7, in Super Bowl III.

Shula that year won his third NFL Coach of the Year award, while quarterback Earl Morrall, filling in for an injured Unitas, claimed league MVP honors.

Shula led the Colts for one more season in 1969 before moving on to the Dolphins, where he would lead the franchise to two Super Bowl titles. In 1972, the Dolphins, at 17-0, would complete the first and only undefeated season in NFL history; Shula was named NFL Coach of the Year for a fourth time.

Shula retired after the 1995 season with 347 total wins as a head coach, the most in NFL history. He was inducted into the Pro Football Hall of Fame in 1997.

Shula’s legacy lives on through the annual Don Shula NFL High School Coach of the Year Award, which celebrates a high school football coach that displays “the integrity, achievement and leadership exemplified by the winningest coach in NFL history, Don Shula.”

In many ways Shula remains the prototype for the smart young head coach who can relate to modern players. For the Ravens, he established a legacy of Baltimore football coaching excellence and cultivated a fan base expecting to win every time out. 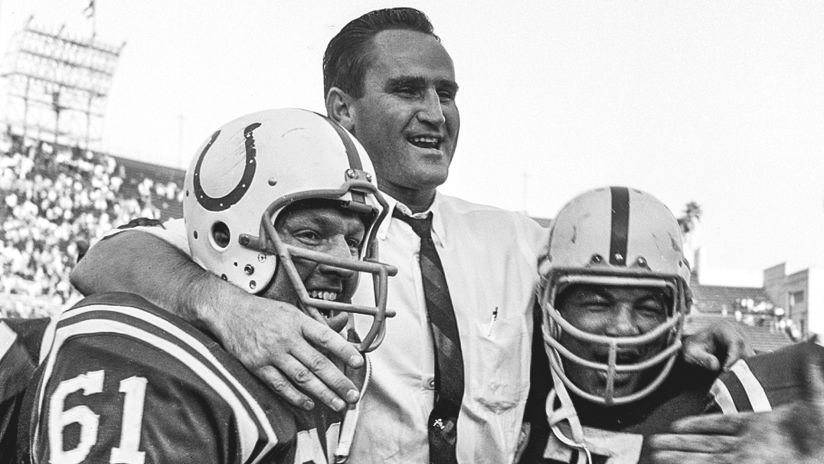 Joe Theismann shares what he remembers about Don Shula

Bayern Munich is on the verge of winning their eighth straight Bundesliga title. On Tuesday from the Westfalenstadion in Dortmund, (…)

According to ESPN 710’s John Clayton, there’s an 85 percent chance that the Seattle Seahawks could re-sign wide receiver Josh Gordon.

At some point this summer, the Edmonton Oilers will take the ice for a best-of-five play-in series against the Chicago Blackhawks. Should the (…)

The pause in the NHL season sucks. It should be the playoffs but it isn’t. While we sit around and wait for sports to come back, (…)

The Islanders will get an added boost whenever the NHL season resumes with the return of a healthy Adam Pelech to the lineup.  General (…)

The Cardinals are cellar-dwellers no more, as the team that has been residing in the NFC West’s basement has climbed out of there with what (…)

It was only a half-year ago that Jay Gruden was still an NFL head coach, yet now he’s tasked with taking a few steps back, and making (…)

Redskins veteran running back Adrian Peterson is none too pleased about the team’s biggest departure this offseason. Like any savvy (…)

The state of California has been turned upside down in the wake of the pandemic, with the governor having ordered everyone residing there to (…)