Stretching Out And Melting Down 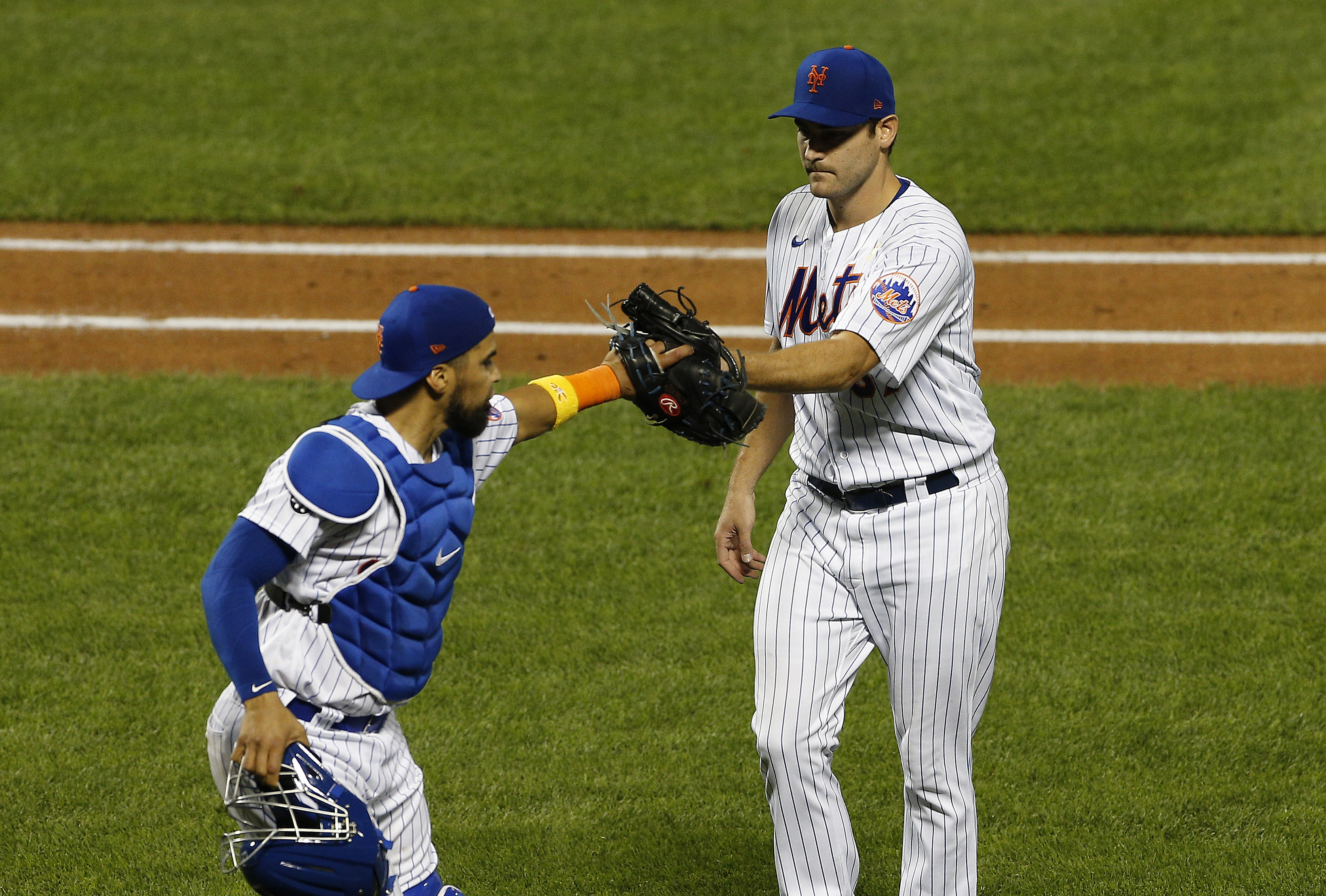 Stretching Out And Melting Down

When Seth Lugo threw a meatball down the middle to Rhys Hoskins that he immediately put on to the m&m tarp in left field, I figured it would be another long night. Lugo was missing his spots in the first and frankly was lucky that he got out of that inning down only 1-0.

But Lugo battled the rest of the way, and not in the sense the he battled because he plays for Art Howe, but battled because he played Hoskins like a fiddle in the next two at-bats. He only threw him two fastballs in the second at-bat in the third and made sure he elevated them to strike him out, and in the fifth just threw him filthy junk to strike him out again. Those were the highlights of his night as he struck out eight and walked two in five innings as he was stretched out to 81 pitches.

The Mets scratched and clawed their way back and onward. Andres Gimenez, starting at shortstop again for Amed Rosario, drove in Jeff McNeil to tie the score with a base hit in the third, and Michael Conforto who is having a year as sweet as a guava empanada, dunked a base hit to left to score Gimenez to make it 2-1. But the key play in the game came in the fourth with Todd Frazier on third after reaching on a hit-by-pitch, and Jeff McNeil on second after a double (he was 2-for-4 and has 13 hits in his last 9 games so I think we can stop batting him 7th now.) Gimenez popped a ball up to short right field. Neil Walker backpedaled while Bryce Harper came in on the ball. Inexplicably, Harper decided to peel off and let Walker handle it, thinking that … well I don’t know what he was thinking but he probably assumed that Frazier wasn’t going anywhere.

But Frazier, wearing Billy Hamilton’s number 21, figured he was fast enough to score on a sac fly to the second baseman, and he was absolutely right to think that … at least he was right to think that there was no way that Walker would make a strong, accurate throw after backing up. So Frazier scored to make it 3-1, and while it is probably inaccurate to say it turned the game around as it merely sent the Mets further along the path they were going, it sure as hell turned Bryce Harper’s night around. 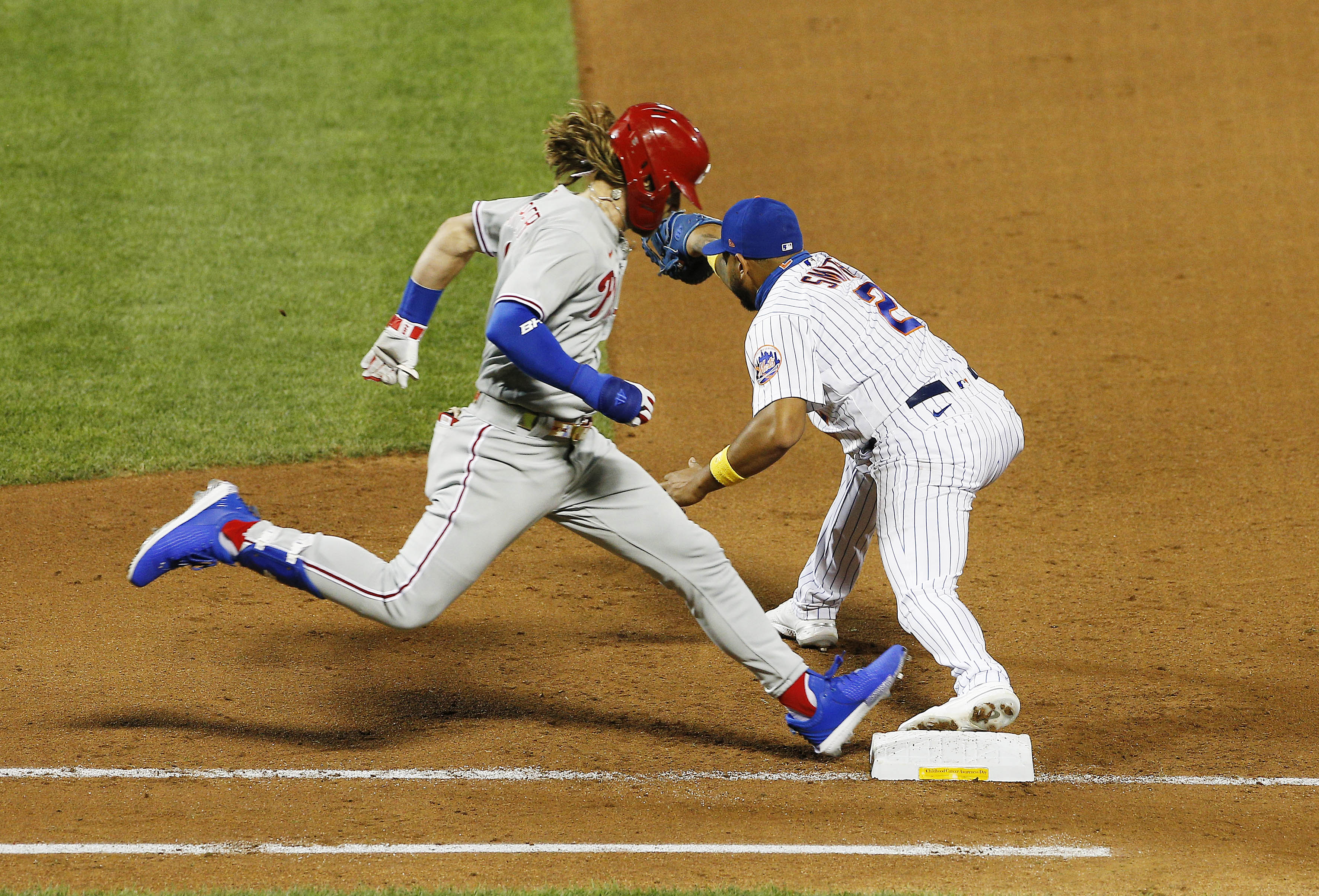 He spent the top of the fifth seething in the bullpen before his next at-bat off Lugo, which ended with a harmless grounder to third but featured a grounder near first base with Roberto Ortiz called foul. Now remember that Ortiz made that horrible call against Dom Smith on the check swing on Thursday. So I wouldn’t put it past him to make the wrong call on the ground ball. It might have gone over the bag upon second look. It’s a hard call, but I can see Harper having a case.

But in the middle of the fifth, Harper goes off the rails and gets kicked out of the game by Ortiz. I don’t know what it is about Citi Field that brings out the Samuel L. Jackson in Bryce, but it wound up helping the Mets even more in the end. Roman Quinn entered the game for Harper and moved to center field. Quinn dropped a catchable fly ball on the run in the sixth to turn it into an RBI double by Robinson Chirinos to make it 5-1 Mets. Then in the 7th with two runners on, the Phillies sent up Phil Gosselin to pinch hit for Quinn in Harper’s spot, and he struck out.

Then in the ninth, Edwin Diaz struck the first two guys out before walking both Adam Haseley and Andrew McCutchen to bring up Hoskins with the tying run on deck. That tying run could have very well been Harper, but … y’know. However, Edwin Diaz told the world “nah, jus’ playin'”, and struck out Hoskins to end the game and let our collective breaths out of our souls.

The Mets’ 5-1 victory featured the first win by a Mets starter since David Peterson on August 13th. Ironic that the starter that finally wins is Lugo, the erstwhile reliever. (Did I use the word “erstwhile” correctly? Don’t really feel like looking it up.) Jacob deGrom, who last won on August 9th, takes the bump against Aaron Nola tomorrow afternoon, which should be fun.

I’m going to save my hate for tomorrow when Brodie tells Rojas to play Todd Frazier, who is 0-for-17 lifetime against Aaron Nola lifetime.