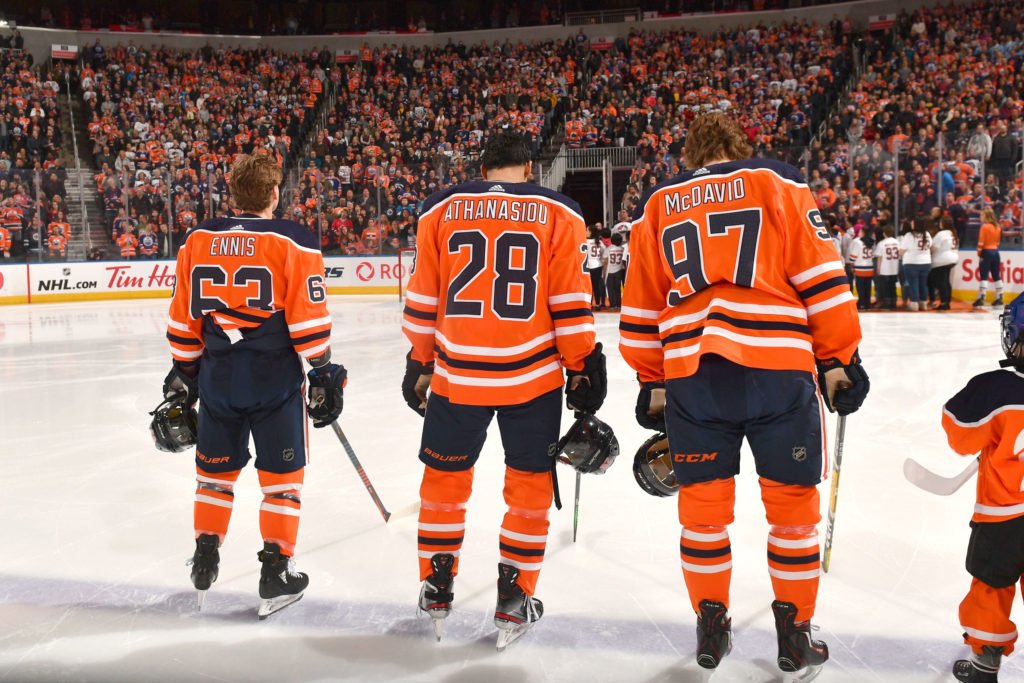 The Edmonton Oilers are apparently moving on from two pending free agents. General Manager Ken Holland told reporters on Tuesday night that the club will not extend a qualifying offer to F Andreas Athanasiou and D Matt Benning. Both are pending restricted free agents, but will become UFA’s now that the Oilers declined to issue a qualifying offer.

The pair will be eligible to sign with the other 30 NHL teams on Friday at 12:00 pm eastern.

Athanasiou was acquired at the 2020 NHL Trade Deadline from the Detroit Red Wings in exchange for forward Sam Gagner and second round draft picks in the 2020 and 2021 NHL Entry Drafts. Athanasiou played just nine games during the regular season, scoring a goal and adding an assist. Both points came in Athanasiou’s debut against the Anaheim Ducks.

Athanasiou failed to collect a point in four 2020 Stanley Cup Play-in games against the Chicago Blackhawks.

Benning, meanwhile, signed with the Oilers as a free agent in August of 2016. A sixth-round pick of the Boston Bruins in 2012, Benning elected to not sign with the Bruins when his college career at Northeastern University ended.

Benning played in 43 games this past season, scoring eight points (1 g, 7 a) while playing a third-pairing role. Benning, unfortunately, has dealt with concussion and head issues the last few seasons.

Benning is a quality third-pairing defenseman, but it is understandable why Holland would go in a different direction. Benning carried a cap hit of $1,900,000 in each of the last two seasons, and would have required a qualifying offer of $2,000,000.

Athanasiou, meanwhile, would have required a qualifying offer of $3,000,000. Both could be considered over payments.

The Oilers do have interest in re-signing both players at a lower AAV. That said, both will now have the chance to test the open market and it is possible that both find greener pastures elsewhere. Benning, in particular, is unlikely to return.

A right-shot defenseman looking for a bigger role, Benning could land somewhere with the possibility of playing a second-pairing role and on the powerplay. That almost certainly does not happen in Edmonton, especially with Evan Bouchard knocking on the door.

Athanasiou will not be in as high of demand, but will still have suitors. The Boston Bruins and Columbus Blue Jackets are two teams that make sense for Athanasiou. The Blue Jackets expressed interest in the forward at the trade deadline.

The Oilers do have interest in pending UFA F Taylor Hall, which could be a reason why the elected to not qualify Athanasiou. These decisions effectively save the club $5,000,000 on the salary cap.