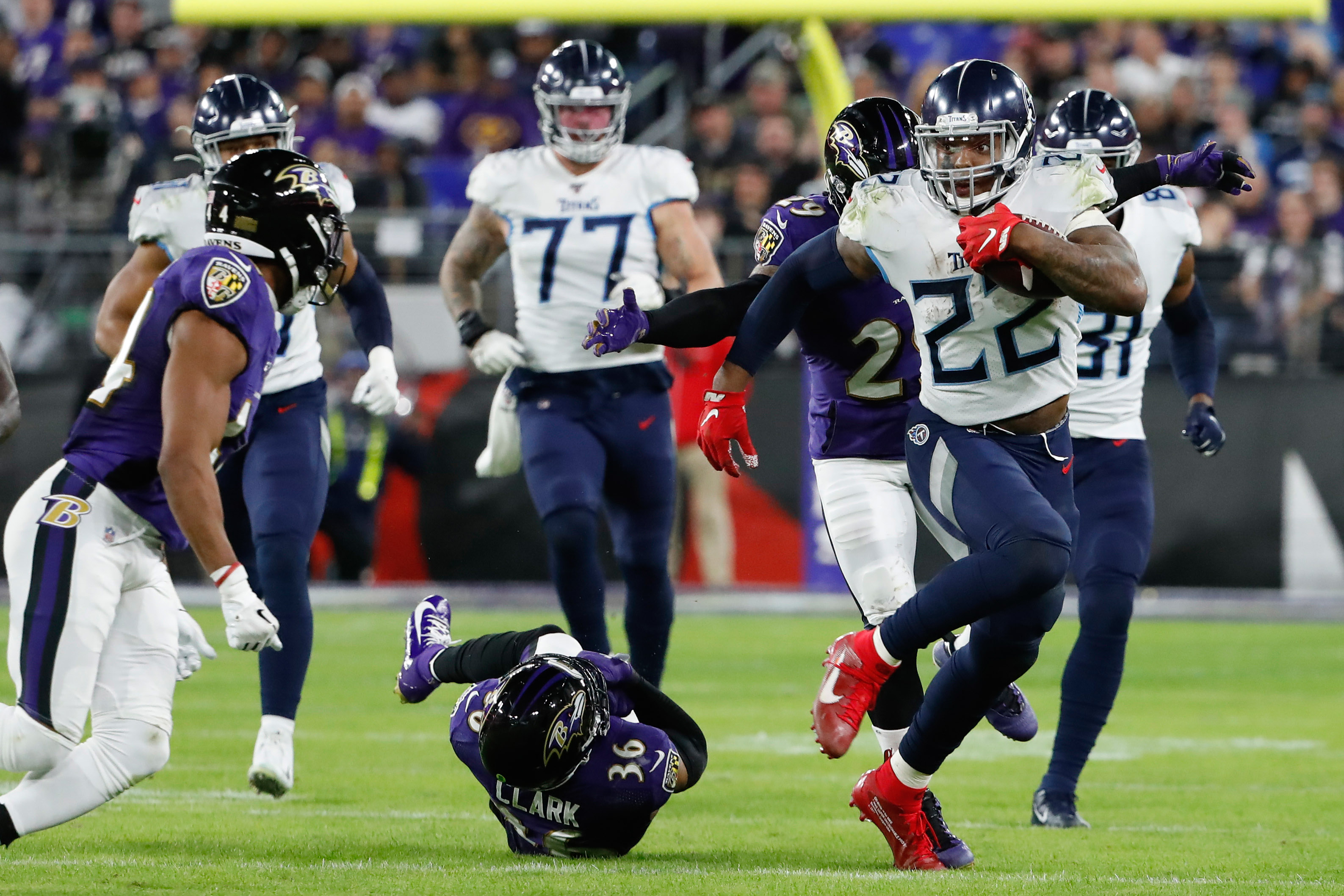 This is gonna be a nail-biter— two teams who feature major weapons on offense and each feeling they have a ton to prove re. “winning the big one”…

A preliminary breakdown of the above deduction by Kevin Eck of BaltimoreRavens.com:

“So which player presents the bigger challenge for defenders when the Ravens play the Titans in a wild-card playoff game Sunday?”

“It’s more challenging to defend Lamar because of the extra added element of the quarterback run,” Clark said. “Don’t get me wrong, nobody wants to stand in front of Derrick Henry. Hell, most people don’t want to stand on the side of him because he’s got that go-go-gadget stiff arm that ends up having you embarrassed in front of your entire family.”

To Clark’s point, the 6-foot-3, 238-pound Henry will run over defenders who know he’ll be getting the ball early and often and still can’t stop him. Jackson, however, can hurt defenses with his arm as well as his legs, which makes the Ravens offense difficult to scheme against.

Moreover, with his ankle-breaking juke moves, Jackson can embarrass defenders by running around them just as much as Henry can running at them.

“When you look at Lamar Jackson and what he can do, how he’s helped J.K. Dobbins ascend to be one of the best rookie runners in the league, the way this total offensive game plan and total rushing plan revolves around him, and the fear factor that he adds with his speed, and also with the unpredictability of who’s going to get the ball, where it will go and who will be blocking, that is a nightmare for any defensive coordinator,” Clark said.

The lone blemish on Jackson’s resume is that he is 0-2 in the playoffs. If he gets over the hump on Sunday, however, it could be bad news for any team that has to play the Ravens in the postseason.

“If he has a good playoff game, they are perhaps unbeatable,” Tony Kornheiser said on his podcast. “I really mean that. I just think that they are scary.”

All that said, the Ravens have had a tougher time containing Henry than the Titans have had containing Jackson in the team’s past two meetings, both Tennessee victories.

Jackson threw for 365 yards and ran for 143 against the Titans in last season’s divisional round loss, but Baltimore trailed the entire game and was held to 12 points. In an overtime loss to Tennessee this season, Jackson had 186 yards passing and 51 yards rushing.

However, the Ravens offense has some new wrinkles, and Jackson and company have been hitting on all cylinders during their five-game winning streak.

“The way the Ravens have changed the formations they use could make the Titans’ job harder,” ESPN’s Turron Davenport wrote. “The 2019 Ravens used more three tight end packages. … The 13 personnel packages (three TEs) naturally cause the offense to line up closer, which helped teams like the Titans accomplish their goal of restricting Jackson’s operating space. Ravens Offensive Coordinator Greg Roman has adjusted by using more 11 personnel (one TE/one RB) groupings this season.

“Baltimore used 11 personnel on 48% of its plays and ran the ball 43% of the time, which is the highest rate in the NFL per ESPN Stats & Information research. Using this package naturally spreads defenses out, creating more space for Jackson and players such as J.K. Dobbins while taking advantage of speedy options such as receivers Marquise Brown and Devin Duvernay on jet sweeps.”

As dynamic as Jackson and running backs Dobbins and Gus Edwards have been, the offensive line deserves a lot of credit for the Ravens’ dominant running attack, which gained a franchise-record 404 yards against the Cincinnati Bengals Sunday and is averaging 267.4 yards over the past five games.

What appeared to be an area of concern not that long ago has turned into a strength, thanks in large part to the development of several young players.

“It was only about a month ago, when it looked like one of the Ravens’ top offseason priorities was going to be fixing the offensive line,” The Athletic’s Jeff Zrebiec wrote. “Since then, second-year pro Ben Powers has established himself as the starting right guard. Third-year pro Bradley Bozeman has continued to look like a building block at left guard. Patrick Mekari has stepped in and done a commendable job at center and when he’s been unavailable, undrafted rookie Trystan Colon-Castillo has made two starts, including one Sunday, and not looked out-of-place at all.

“Throw in Orlando Brown Jr. proving to be well more than adequate at left tackle in place of injured Ronnie Stanley and rookie draft picks Tyre Phillips and Ben Bredeson getting valuable snaps at different spots and suddenly the Ravens look like they already have the makings of a pretty good offensive line in house.”

Bozeman, in particular, had a strong game Sunday, for which he was named to Pro Football Focus’ Team of the Week (along with Dobbins, who also was named Offensive Rookie of the Week).

“You watch many of the Ravens’ big runs and Bozeman often springs them with a key block,” Zrebiec wrote. “Take rookie J.K. Dobbins’ 27-yard run on the Ravens’ first drive of the third quarter. Bozeman sealed off his man, creating a big hole for Dobbins to run through. Bozeman then sprinted about 25 yards down the field to try to push Dobbins forward as the running back was still fighting for extra yards while engaged with three Bengals. Great execution and then great hustle for Bozeman, whose emergence into a high-quality guard has been a significant development for the Ravens this year.”

Another key player in the offense’s success in recent weeks is Pro Bowl fullback Patrick Ricard. Penn Live’s Aaron Kasinitz said the undrafted defensive lineman out of Maine “is one of the Ravens’ most important players as they head to the postseason.”

Ricard has taken on a heavier workload after top blocking tight end Nick Boyle suffered a season-ending knee injury in November. On Sunday, Ricard played 51 offensive snaps and was on the field for 69 percent of the unit’s plays, both career highs. He out-snapped every other skill-position player on the offense.

“The peak of Ricard’s playing time follows a recent trend,” Kasinitz wrote. “Entering Week 13 of this season, he had never played 50% or more of Baltimore’s offensive snaps in a game. Since then, he’s hit that mark in five consecutive contests, all of which were Ravens victories that featured a heavy reliance on the running game.

What Is the Ravens’ One Potential Fatal Flaw?

Farrar noted that the Ravens dropped from seventh to 26th against the pass in DVOA (Defense-adjusted Value Over Average) from Week 10 through Week 16.

“Baltimore’s secondary has allowed 21 touchdowns to nine interceptions this season. Yes, injuries have been a factor, and we’ll see how that goes, but Ryan Tannehill could make hay against this group, as he did in Week 11,” Farrar wrote. “In a 30-14 Week 11 Titans win, Tannehill completed 22 of 31 passes for 259 yards, two touchdowns, and one interception — from linebacker Tyus Bowser.”

Marcus Peters, who grabbed an end zone interception against Allen, missed the previous two games because of a calf injury. Jimmy Smith (ribs/shoulder) has sat out the past three games, but could return to the field against the Titans. For the first time in a long time, the Ravens’ cornerback corps could be totally healthy.