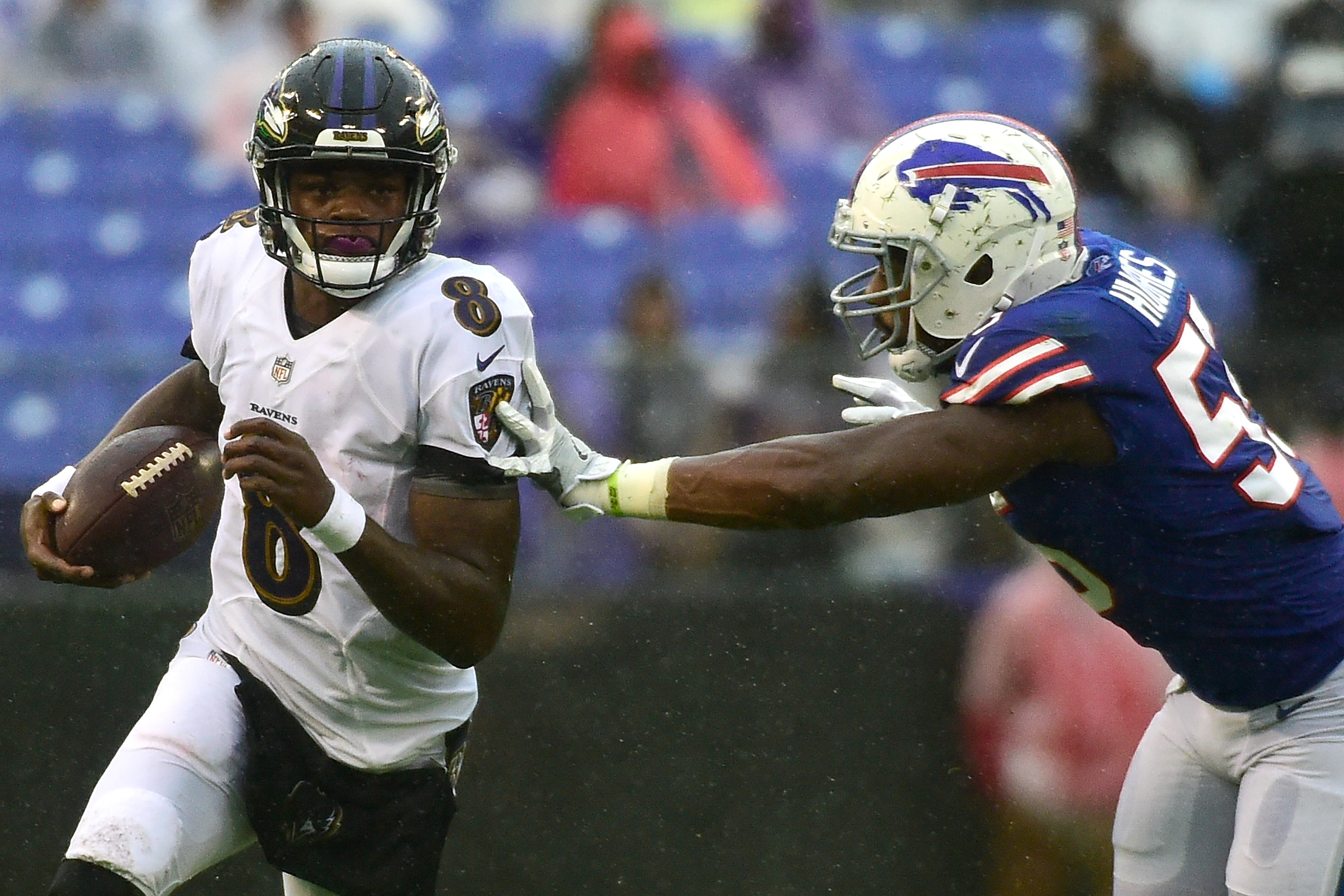 Hey, it’s not like the Ravens’ offense is a given to offset any Baltimore defensive lapses, you know what I mean?  It’s the playoffs in Buffalo, baby, and points will be at a premium.

But let’s say Lamar and a reasonably functioning offense are good for a minimum 20 points.  That means you gotta hold Josh Allen and the Bills offense to a max 2 TDs and a FG.

Ryan Mink at BaltimoreRavens.com sums up the dilemma like this:

“The Ravens’ defensive performance Sunday against the Tennessee Titans and Derrick Henry was one to remember. Now, can they do it again against an equally dangerous, but different challenge?

The Titans and Buffalo Bills finished the regular season tied with the second-most offensive yards in the NFL (396.4 per game). While the Titans had the NFL’s top rusher in Derrick Henry, Buffalo has a strong-armed MVP candidate quarterback in Josh Allen and the NFL’s leading receiver in Stefon Diggs.

“While Henry was a challenge for Baltimore’s revamped defensive line, the Bills are a formidable foe for the secondary the Ravens have been stockpiling the past several years.

Allen was named to his first Pro Bowl this year after he threw for the fifth-most yards in the league this season (4,544). He tossed 37 touchdowns to just 10 interceptions. But he’s more than just a great passer.

“What makes him so dangerous is that he can make any throw on the field, extend plays with his legs, or take off running (and be a load to tackle at 6-foot-5, 237 pounds).”

In other words, Josh Allen is for real, folks.

“It’s a young Ben Roethlisberger because of his size and how he extends plays with like [Dan] Marino’s arm,” Defensive Coordinator Wink Martindale said.

The doubts about Allen coming out of college were that he was too inaccurate, and that followed him his first two years in the NFL. He had a 52.8 percent completion rate as a rookie, then 58.8 percent his second year – both seasons significantly lower than Lamar Jackson, whose passing ability faces plenty of scrutiny. But this year, Allen’s completion percentage jumped to 69.2 percent, only bested by three other quarterbacks. His deadly arm is now finding its targets.

“Most of the time when you evaluate the quarterback and he’s not accurate, it’s hard for them to shed that tag,” Martindale said. “What he’s done in the offseason and what he’s done this season, it’s amazing to see. His accuracy on the move, his accuracy in the pocket, everything he’s done, he’s done accurately.”

Allen also ran for 421 yards and eight touchdowns this season. He ran over the Indianapolis Colts last weekend with 11 carries for 54 yards and a score. Martindale said he’s told his players this week that they have to tackle Allen like he’s Henry.

So how does Martindale plan to slow down Allen? Well, part of the answer will be what Martindale is known for – pressure.

The Ravens have blitzed 41 percent of the time this season, the highest rate in the NFL. Allen has thrown a league-high 19 touchdown passes against pressure. Baltimore had success bringing the heat on Allen in their meeting last year – sacking him six times, forcing two fumbles and holding him to just 17-of-39 passing (the second-lowest completion rate of his career) and 146 yards.

Part of what’s helped Allen this year is having a big-time receiver on the other end of those throws. In his first season with the Bills after being added via trade with the Vikings, Diggs posted 1,535 receiving yards and led the league in receptions (127) and targets (166).

The last time the Ravens faced a receiver who finished as the NFL’s receiving yards leader was in 2018 when they squared off with the Atlanta Falcons’ Julio Jones. Jones posted two catches for 18 yards.

But it’s not just Diggs for the Bills. Cole Beasley posted 82 catches for 967 yards, Gabriel Davis had seven receiving touchdowns and former Raven John Brown is back healthy and able to make big plays.

“They have a lot of speed. All their guys are really good, they’re all active,” cornerback Jimmy Smith said. “We know what Diggs is capable of doing, Beasley is good at moving the chains and underneath routes. It’s going to be a tough challenge for us. We’re a man-to-man team and we’re going to have to get our hands on these guys and slow them down.”

The Ravens feel like they’re up for whatever offense comes their way right now. They finished the regular season ranked seventh in the NFL in yards allowed (329.8 per game) and second in points allowed (18.9).

Much attention has been put on the Ravens’ offensive turnaround, but Baltimore’s defense is hitting its stride, too. Since the wild Monday Night Football win in Cleveland, the Ravens have surrendered just 43 points in four games and allowed an average of 235 yards per game.

It’s been a collective effort, and the Ravens are finally healthy in the secondary and head coach John Harbaugh sees a unit that is gelling late in the season.

“I just feel like [they’re] playing together,” Harbaugh said. “Communication has been excellent. … And then, to see the way we played our technique. The way we played with our eyes, our hands, our feet, our spacing; all of that was really, really impressive in the [previous] game.”