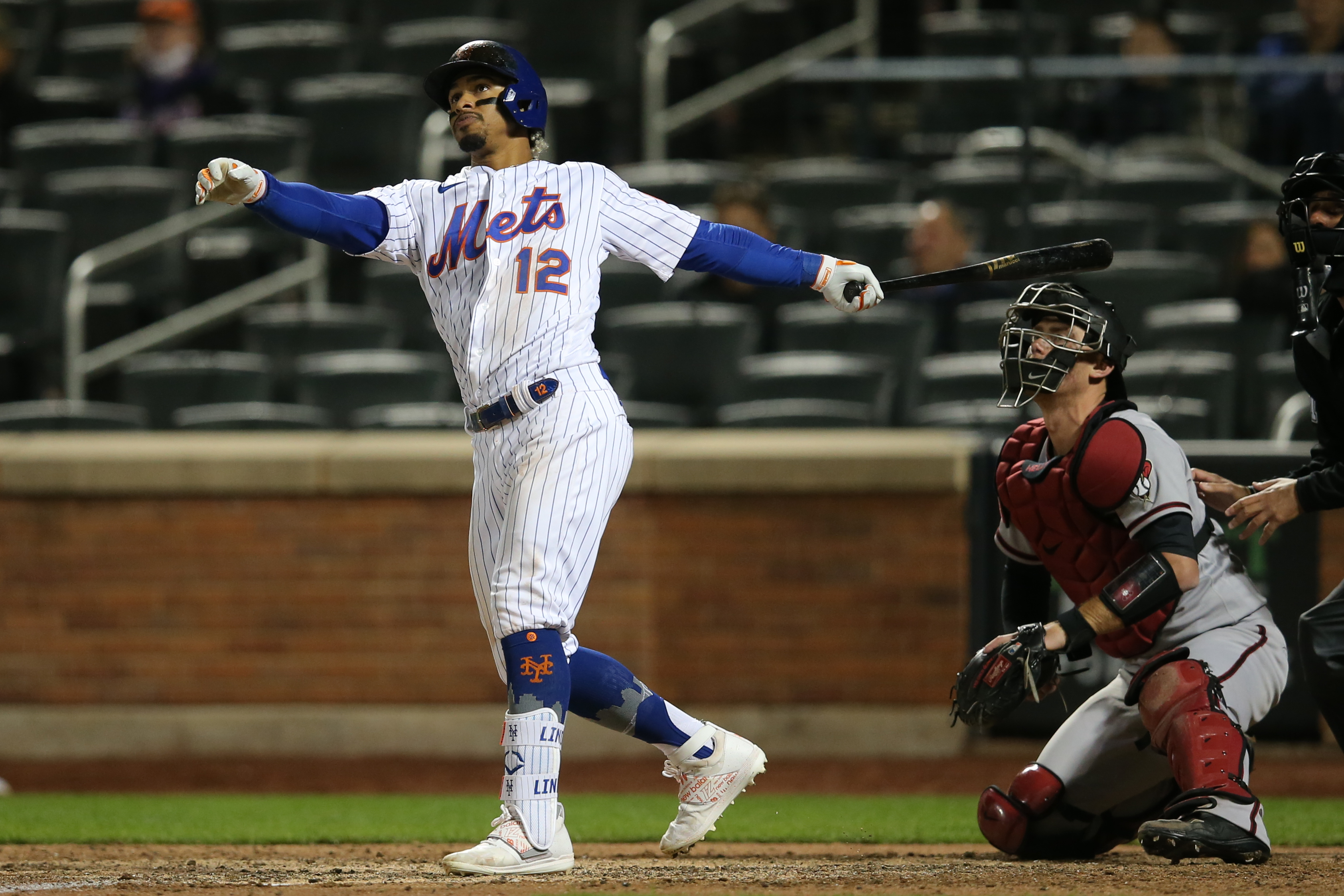 This is going to be one of those seasons, isn’t it.

I mean, silly me for thinking that with Steve Cohen owning that team that the bizarre was going to just float away like a cumulus cloud. Silly me for thinking that tonight’s entry was basically going to be a 500 word essay on why you can’t walk the opposing pitcher and why the Mets sent down every long man they have while their starting pitching is stretched thin and they’re still not hitting in a 4-0 loss to Arizona.

What the hell was I thinking?

After David Peterson spit the bit throwing slop at the Diamondbacks instead of throwing his fastball, and thus putting the Mets in a whole that would grow to 4-0, the Mets crawled back with RBI singles from Michael Conforto in the third and Jonathan Villar in the fifth. Then, suffice to say, this became a Mets game.

In the top of the 7th, Francisco Lindor and Jeff McNeil miscommunicated on a ground ball.

If this confusion on a groundball between McNeil and Lindor is what fires up Fransico Lindor then I'm all for it. Give me angry Lindor hitting game tying HRs all day pic.twitter.com/St3HiYsEuz

Now this has happened before, just as some spectacular plays have happened between the two, but there was no reason to believe that this was going to turn into the Hunger Games. But then in the middle of the 7th, we saw this …

Lindor and McNeil going at it in the tunnel? 👀 pic.twitter.com/VnAcOWIXBY

Now the funny thing about this was that my wife’s reaction to this after seeing it, swear to God, she says “did they see a rat?” Now for ballplayers to run down the tunnel in that manger for a rat? Well that would have had to been the rat to end all rats. But I guess more on that later.

The other thing to realize is that my Internet is out (more on that later, too) so I’m relying on Howie and Wayne to skate me through this. And after we saw them run down the tunnel, Howie says that Pete Alonso is patting Jeff McNeil on the back as McNeil’s mouth was bleeding. Oh great, somebody punched the Squirrel. And through all accounts on Twitter, it was Francisco Lindor.

Now, for those who only know from meme culture where everything turns into a thing on social media, there was a period where this sort of thing happened all the time. The 1974 Oakland A’s had a fight every day. Hell, that’s how they said hello. But now, where everybody is measured and business-like and worried about process more than results, this sort of thing doesn’t happen often in baseball today. So when it does, it becomes a big deal which is magnified by the fact that we’re in the social media age where everything is put into historical context in five minutes rather than the 20 years it used to take when the book came out.

But we’re in immediacy mode. So much so that we’ve already forgotten that Francisco Lindor hit a two run game tying home run in the bottom of the very same inning that he gave his double play partner a black eye. I mean, I don’t even think Ty Cobb ever did that. Think about this amazing feat: Fight a guy between innings, then take your at-bat while you’re hitting a buck-ninety, smack a two run home run to tie the game. That’s like of Keith or Darryl had hit a home run in 1989 after Picture Day. But not only does he hit a home run, but it becomes the spark that sent the team to victory when Patrick Mazeika, who looks like somebody you might run into playing Supertramp on acoustic guitar on the E train headed to Lexington Avenue, hit a 15 foot dribbler with the bases loaded to win this crazy game. Hopefully history will show this, a game they had no business winning after Peterson got wiped out but cobbled through on brilliant bullpen work (welcome to the team, Tommy Hunter) and, pray tell, clutch hitting.

Face it, if Lindor did this in 1986, he’d be legendary. But here we are in 2020 and Lindor is basically a meme now, as nobody will remember anything else except Jeff McNeil’s black eye. Oh, and the rat my wife surmised that this was all about? Lindor ran with that story.

Here are some partial comments from Francisco Lindor, Jeff McNeil and Luis Rojas on the rat/raccoon/possum situation: pic.twitter.com/WyrLykRX4m

Now two things here: First off, the fact that Lindor and McNeil are already laughing this off and making up stories tell me that they took the time that they would normally spend being mad and actually spent it collaborating on a story to tell the media. They turned a brawl into happy fun times. Imagine Billy North and Reggie Jackson coming up with a raccoon or rat story to the media in 1974. I mean, the fact that this has seemingly run its course is a good sign.

But second: If this actually hasn’t run its course and Lindor and McNeil are just good actors, then it’s going to be a problem. And if it develops into a situation where one of them has to go, it’s not going to be the guy with the $361 million contract. So while I don’t want this to come to fruition, I hope it doesn’t come to fruition, and I don’t think it will come to fruition, it bears stowing this away in the back of your minds in the off-season, or even in July if the Mets have an opportunity to trade for a big piece and somebody of value has to go. I’m not betting my life on this. All I’m saying is keep this in the back of your minds going forward. 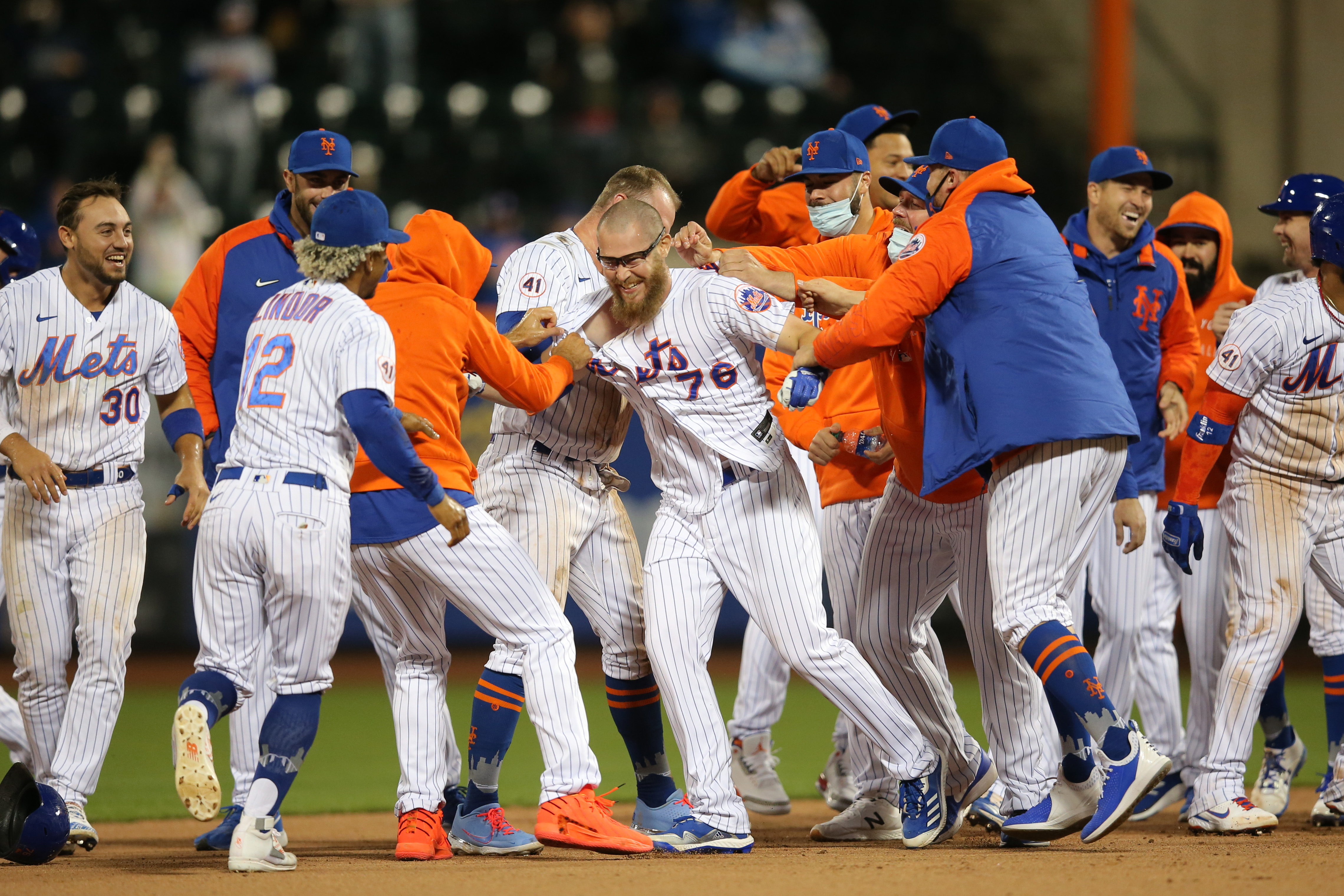 Now having said that, making up stories about raccoons and rats and imaginary hitting coaches seems to be part of the charm of this team. They have their own little alternate universe happening as if they were trying to play The Sims without actually using a computer. Look, if Lindor and McNeil were brooding about it and refused to say anything about it, or even gave the standard “it is what it is … what happens in the clubhouse stays in the clubhouse” lines, somehow that would be worse. Or at the very least, that wouldn’t satisfy anyone either. So let’s all have a laugh about it and move on. We don’t laugh enough anymore anyway. Besides, think of what we’ve been through as fans of this team. Take that perspective with you. A fight in the tunnel? That’s like a normal Tuesday around here.

Is this victory going to be the spark that sends the Mets to the promised land? Damned if I know. But that’s part of the fun. We have a whole summer to dream about raccoons, rats, and playoff runs featuring the big money shortstop and Patrick Mazeika’s beard. Of course, Lindor could be taking the Bobby Bonilla route to our hearts. In that case, pop open a beer and roast some marshmallows over the tinder that is the world burning. And be ready for that contract to be deferred until the year 3021, when none of us will be around anyway and your great grandkids 25 times over will be paying for the interest on that contract buying $2000 Jeff McNeil XI Squirrel Burgers at Polo Grounds III with the retractable roof and the Brodie Van Wagenen Rotunda.

Now if only Mike Puma would have waited one more year to write that book.