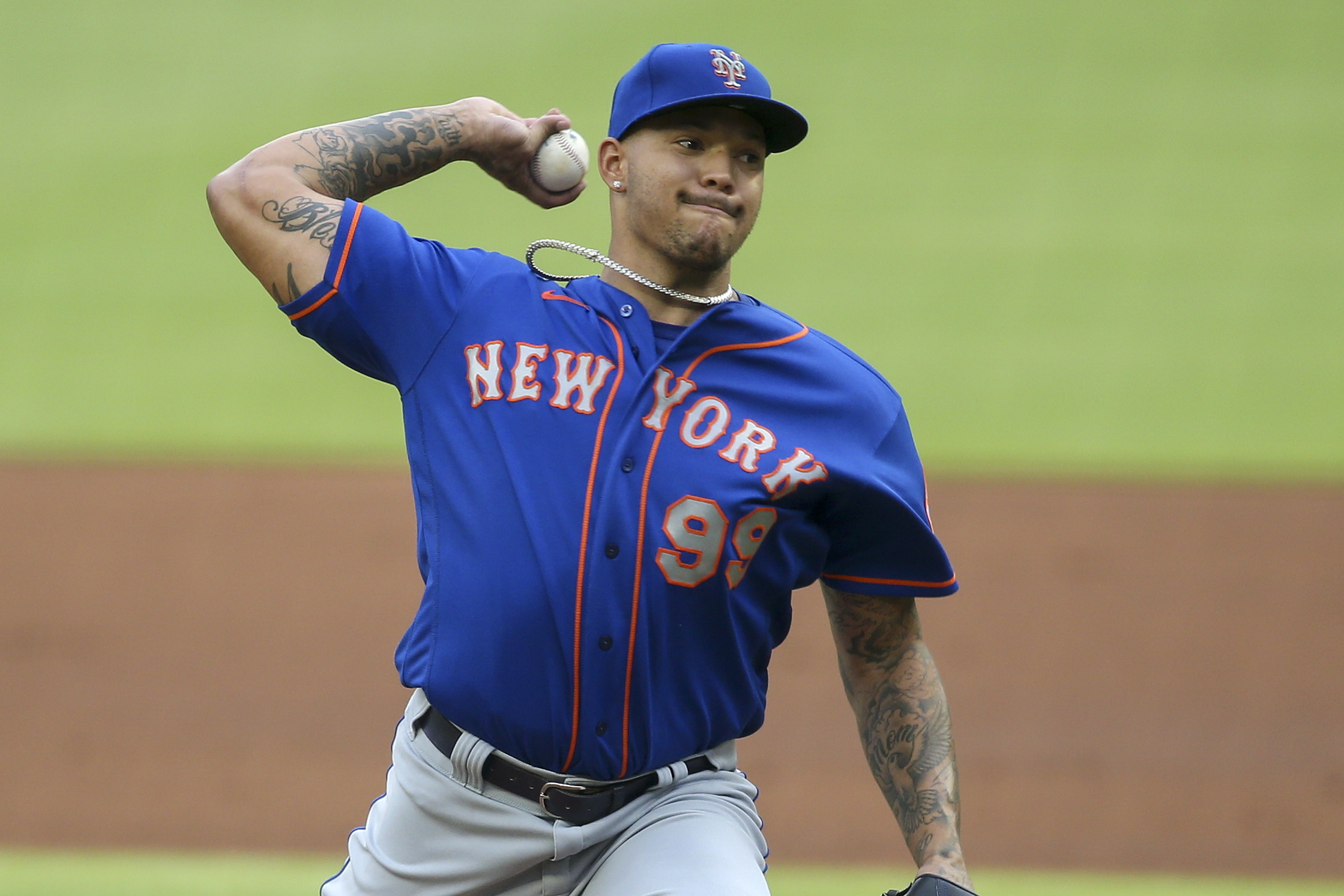 (Editor’s Note: I wrote this as the game was happening, and not all at the end. This usually isn’t an important detail to highlight but considering what happened to Kevin Pillar, I felt the need to point this out. You’ll understand this distinction as you go.)

Steven A. Cohen just got his first lesson in the dark arts of dealing with the baseball gods: “Don’t tempt them. They will take every opportunity to stick it to you.” You tell them that it could be 12? They tell you that it will be 12. “Let’s have a look here … oooooooh! Taijuan Walker has a 2.20 ERA and a 1.02 WHIP. Let’s add him to the list.”

Oh, and your money is no good in their world, Steve.

Ron Darling had warned everyone in the third inning. Walker looked shaky out there. He had faced nine batters and only given up a hit to opposing pitcher Max Fried. But to Acuña he was yanking pitches outside, and was looking “queasy” as Darling put it. We probably should have realized it when Taijuan basically stopped swinging the bat last Wednesday.

This was the worst at-bat of the year.

Walker struck out Acuña, but that was it for him for the game. “Left side tightness” was the diagnosis, to complete the matching set with Jacob deGrom’s right side tightness. Between that and the right hamstring that Conforto pulled pairing up with the left hanstring pull that befell Jeff McNeil, the Mets only option at this point is to take the remaining parts of the four players and create one healthy player named Jeffjuan deForto.

Now to be fair, and I know that there is a sizeable portion of people that read this or follow me that think that the other 29 rosters in the league exist exclusively to torture the Mets. I mean, it’s their primary function, just not exclusive. And the injuries are hitting them too. Max Fried was also pulled from the game after he pitched to Tomas Nido in the 7th.

Players sent to the non-COVID IL between day two and day 47 of the season:

Sean Reid-Foley (from Guam) pitched three scoreless innings for the Mets while featuring a mustache direct from the Randy Myers 1988 collection to get the Mets to the 7th. After Tomas Nido doubled and Fried was pulled, James McCann had an at-bat that didn’t come with a parental advisory as he doubled down the line to give the Mets a 1-0 lead.

With the bases loaded, in the 7th, Jacob Webb came up and in to Kevin Pillar and hit him in the helmet, and it was ugly. There was blood everywhere. Thankfully he was able to walk away, and hopefully the blood just made it look worse than it was and it caught him in a spot that caused extra blood to flow but saved him a concussion. Seeing it on television was jarring, but it looked like it was ten times as jarring to everybody that was involved in the situation. Webb was shook. His teammates seemed to be ghosts while Sean Newcomb was warming up. 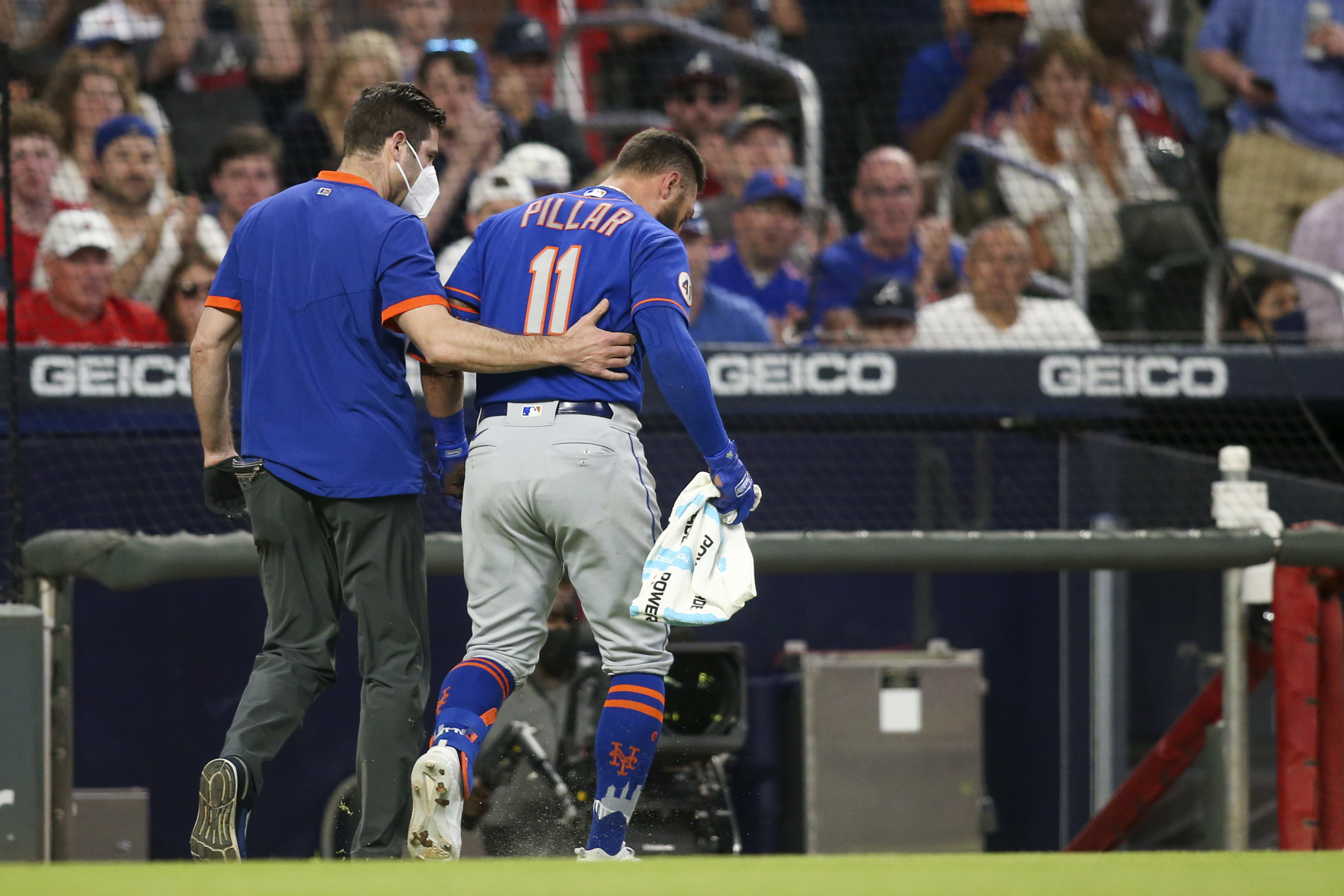 May 17, 2021; Atlanta, Georgia, USA; New York Mets center fielder Kevin Pillar (11) is helped off the field after being hit by a pitch against the Atlanta Braves in the seventh inning at Truist Park. Mandatory Credit: Brett Davis-USA TODAY Sports

What was haunting, on top of all of that, was seeing the groundscrew come out to rake the dirt around the area where Pillar was hit to cover up the blood. Here’s hoping that Pillar’s physical pain is healed, and that Webb’s emotional state is healed as well. I’m not putting this in the same category as the Mets’ litany of injuries, nor as I use it to further the joke at the beginning of this passage. I just hope everyone comes out of this okay.

Johneshwy Fargas made his debut tonight as the 9th hitter in the lineup, becoming the first player in Mets history to wear number 81. He made his first major league impact with a bloop double past Acuña to drive in Nido to make it 3-0 (I hope you enjoyed his tweet, which I bring to you basically because I’m going to need a little bit of help spelling his name over the next few weeks.) It turned out to be a key insurance run because Trevor May struggled a bit in the bottom of the eighth, giving up an oppo taco to Austin Riley and a double to Guillermo Heredia who was a Met for about ten minutes last season. It brought Pablo Sandoval to the plate as the tying run, and Sandoval has become frappeur de pincement élite. (That means good pinch hitter.)

But May threw a ball just heavy enough to keep in the park as the Panda lined out hard to right field, and then got a fortuitous bounce by getting no bounce on Ehire Adrianza’s liner to Jose Peraza for the third out, keeping Acuña from getting a chance at the plate as the go ahead run. Then in the 9th, despite the fact that Edwin Diaz threw six out of his first seven pitches for balls, Marcell Ozuna and Ozzie Albies attacked the first pitch, and both flew out harmlessly to end the game.

The Mets won a game that looked like it had loss written all over it, and the win coming against Atlanta after what happened with Walker and Pillar makes it extra huge. Sean Reid-Foley threw three perfect innings, and Tomas Nido had three hits to key the victory. But going forward, Nido can’t be the Mets’ best hitter. And we’re going to see a lot of Vargas and Khalil Lee going forward. But despite all the injuries, there are still three guys in the lineup who have the talent to carry the team, and it’s time for Francisco Lindor, Pete Alonso, and Dom Smith to do some heavy lifting.

But considering how many Mets have been injured, I’d bend at the knees.

Update: Kevin seems to be doing just fine and has things in perspective:

Thanks to everyone that has reached out! Scary moment but I’m doing fine! #RBI #gamewinner 👍🏽👍🏽