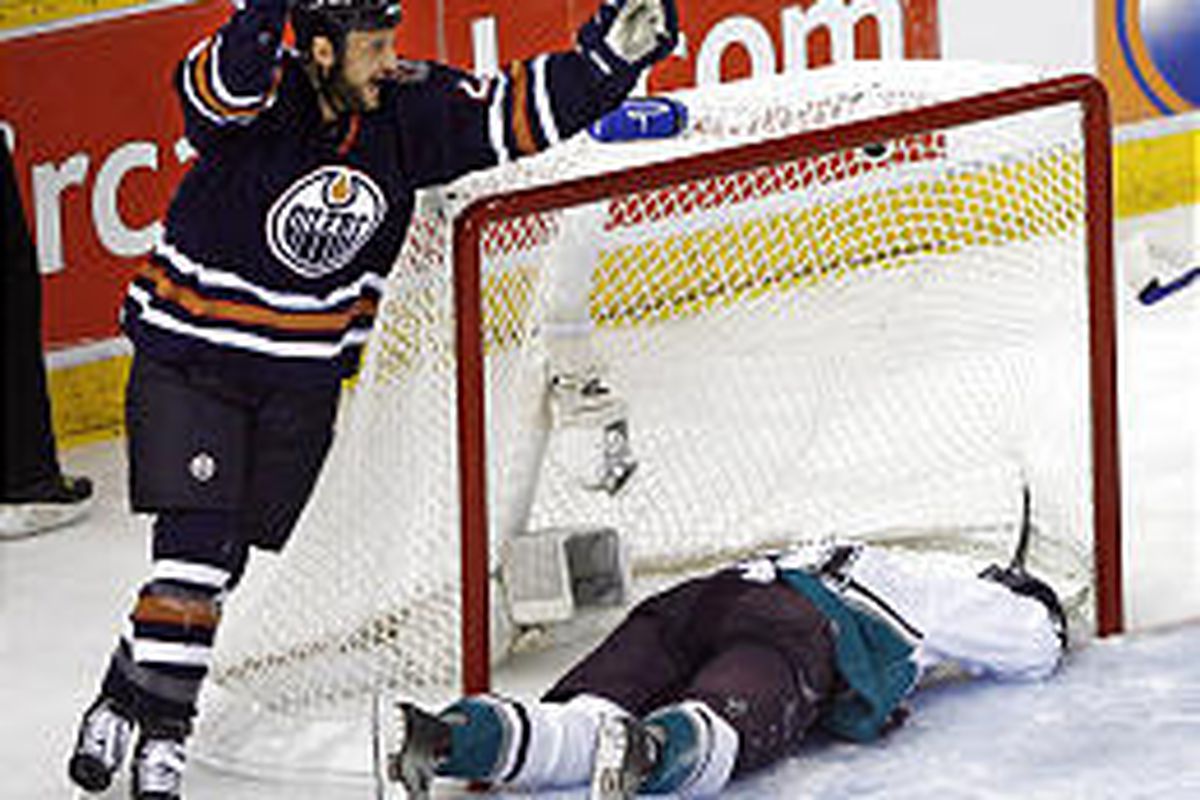 15 years ago tonight, the Edmonton Oilers returned to Rexall Place for Game 3 of their 2006 Western Conference Final series with the Anaheim Ducks. The Oilers were riding a six-game winning streak, having stormed back from down 2-0 to take out the San Jose Sharks in six games in the Semifinals and winning a pair of 3-1 games in Anaheim to kick this series off.

Now, with all kinds of momentum, the Oilers looked to put the Ducks on the brink of elimination. A victory would have the Oilers one win away from their first appearance in the Stanley Cup Final in 15 years.

Things started with a bang. Just under three minutes into the hockey game, the gloves came off. Big Georges Laraque ignited the home crowd as he dropped the gloves with Todd Fedoruk of the Ducks. Laraque wrestled Fedoruk down to gain the decision.

Less than a minute later, the rough stuff continued. Todd Marchant bumped Chris Pronger into Dwayne Roloson after the whistle, creating a pile in front of the Oiler crease. Jason Smith and Dustin Penner exchanged words in the scrum, very nearly dropping the gloves and exchanging punches.

Finally, the rough stuff stopped and the goals came. Marc-Andre Bergeron’s pass was too far ahead of Laraque, who got a piece of it but could only deflect it behind the Anaheim net. Ilya Bryzgalov came out to play the puck, leading to disaster.

Rem Murray won a footrace for the Oilers and separated Bryzgalov from the puck. The loose puck was stolen by Toby Peterson, who stuffed home his first-career playoff goal at 13:47 of the hockey game to open the scoring.

Edmonton would take that 1-0 lead into both the first and second intermissions. What came in the final twenty minutes, no one could have expected.

Early in the third period, the sides played four-on-four, with the Ducks applying pressure. Ruslan Salei tried to fire a shot through traffic, but it hit the leg of Michael Peca, who chased the puck and collected it at center. All alone, Peca walked in and fired a shot over the glove of Bryzgalov at 2:19 to give Edmonton the insurance.

The Oilers didn’t stop there. On their ensuing powerplay, Fernando Pisani collected the puck in the slot in his own zone and started away. Pisani found Sergei Samsonov, who blazed into the offensive zone and wheeled his way into the slot. Samsonov dropped a pass back for an oncoming Steve Staios, who stepped into a shot that blew by Bryzgalov and put the Oilers ahead 3-0 at the 3:35 mark. The powerplay goal was the steady veteran’s first ever in the playoffs.

After Staios’ marker, the rough stuff resumed. With 16:15 left in the hockey game, Laraque and Fedoruk went for round 2, with Laraque again taking down Fedoruk.

With the Ducks down 3-0 and the series on the brink of being lost, frustration set in. Anaheim started a parade to the penalty box, which resulted in a five-on-three for Edmonton. Once again, the Oilers made them pay.

This time, it was Pronger with a booming shot from the point that went through everything and into the goal at 4:40. At that point, it was 4-0 Oilers and all fun and games at Rexall Place.

The Ducks got on the board at 7:15 of the third period, cutting the deficit to 4-1 as Sean O’Donnell fired home his second of the playoffs. His one-timer was partially stopped by Roloson, but trickled in to give the Ducks life.

Just under two minutes later, it was a two-goal game. Teemu Selanne was left all alone in the slot, and took a pass from Penner. He patiently walked in, faked around Jaroslav Spacek and then beat Roloson for his sixth of the playoffs at 9:13.

2:02 later, it was 4-3. Ryan Getzlaf fired a shot into traffic that hit a leg and bounced to Chris Kunitz. Kunitz fired a backhander on net that beat Roloson at 11:15, giving the Ducks three goals in a span of four minutes.

With Anaheim pouring on the pressure and Edmonton barely hanging on, the Oilers needed someone to step up and save them. That man, as it had been all spring long, was Pisani.

Peca won an offensive zone draw with just under six minutes remaining in the game. Pisani fired a shot off the draw that bounced right back to him. Pisani collected the rebound, deked around Bryzgalov and tucked home his ninth of the playoffs at 14:14 to restore the two-goal lead.

The Ducks, however, didn’t go quietly even after Pisani seemingly put the game out of reach. After a quiet few minutes, the Ducks had an offensive zone faceoff of their own with 1:50 left in the game. Selanne was forced to take the draw, and won it directly back to Scott Niedermayer. Niedermayer’s shot hit Selanne, then went off the stick of Marchant and into the goal at 18:15 to get the Ducks back within one again.

In the final half minute, with the extra attacker, the Ducks pushed. Their best chance came with just over 15 seconds left, when Penner had a wide-open goal but flubbed on the backhand attempt. The Ducks never got another shot on goal, and the Oilers, ravaged with the flu, held on for a 5-4 victory.

Now, the Oilers had seven straight wins, and sat with a 3-0 lead in their series with the Ducks. Just one win away from a berth in the Stanley Cup Final, the Oilers were playing their best hockey in what seemed like years.

Could they finish the job in Game 4?