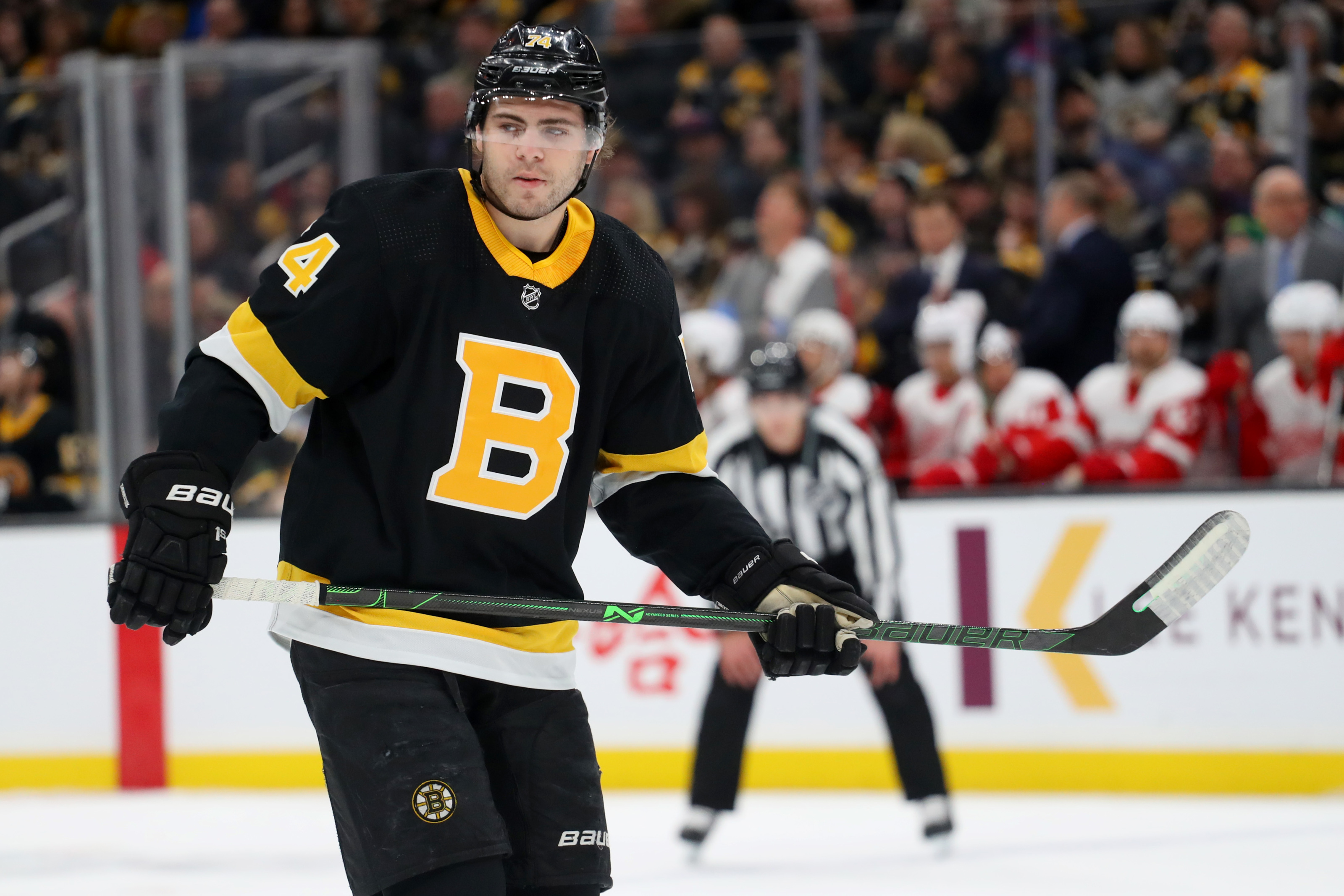 The Edmonton Oilers are going to market this summer with real cap space, the first time that has occurred in the Ken Holland era. The expectation is that Holland will use that money to improve a team that has been to the playoffs in each of the last two seasons.

It’s a lot to get done in one summer, and perhaps too much to get done via the free agent market. Holland may have to go the trade route, which in the era of the flat cap could offer good value at discount prices.

One of the players likely to be on the trade market is a solid second line winger who is from Edmonton, can score goals and plays a physical style. Boston Bruins winger Jake DeBrusk is almost certain to be traded this summer, and his hometown team could be a solid landing spot.

Jimmy Murphy of ‘Boston Hockey Now‘ does an outstanding job of covering the Bruins, and wrote about DeBrusk’s future in the aftermath of Boston’s elimination last week at the hands of the New York Islanders.

“He’s out there again but at what price,” an NHL scout commented to ‘Boston Hockey Now‘ over the weekend. DeBrusk was reportedly on the market last off-season as well when he was an RFA, but signed a two-year deal with the club in November.

DeBrusk was once viewed as a key part of the Bruins’ next wave of talent. As a rookie in 2017-18, he scored 16 goals and finished the season with 43 points (16 g, 27 a) in 70 games. His sophomore season saw an offensive explosion, as DeBrusk scored a career-high 27 goals, finishing the season with 41 points in 68 games.

The issues for DeBrusk started in the second half of that 2019-20 season, however. DeBrusk scored just one goal in the final 14 games of the abbreviated season. That goal also happened to be his only point in that span. His playoffs weren’t much better, as he managed just four points, all goals, in 13 games.

The struggles continued in 2020-21, a year that DeBrusk admitted was difficult on him mentally. He scored just 14 points (5 g, 9 a) in 41 games, and found himself as a healthy scratch for stretches.

DeBrusk also had a bout with COVID-19, and had a tough time mentally dealing with the speculation and heavy criticism surrounding him.

“I need to revamp some stuff. There were a lot of factors that went into this year. Things that I could control and [things that I] couldn’t control. I dealt with a lot of negativity as well. It’s one of those things that it’s something you have to learn, as you sign up. I’m a big boy, I can handle that, I just became a little bit of an easy target,” DeBrusk told reporters at his season ending press conference.

“My haters had a lot to say this year. It’s one of those things where, like I said, just have to revamp some things with training and a different mindset.”

The Bruins have to re-sign free agents Taylor Hall, Mike Reilly, Tuukka Rask and David Krejci this summer. If they plan on doing that, and adding to the roster, some salary will need to come off the books. DeBrusk’s salary, after a down season, seems likely to be dangled by GM Don Sweeney.

Does He Fit The Oilers?

From a pure player perspective, DeBrusk is actually a really good fit for Edmonton. In two of his most recent three seasons, he was a lock to score 20 goals. There is a player there. DeBrusk, who is 6′ and 194 pounds, is not afraid to throw the body and play a power game if needed. His style is also a good match for playoff hockey, which Edmonton needs more of.

He’s clearly a top-six forward when right, and could experience a boost playing with either Connor McDavid or Leon Draisaitl. With all due respect to Krejci at this stage of his career, DeBrusk has never really been given an extended look with an elite center like he would in Edmonton.

Trading for DeBrusk should provide the Oilers with a top-six left winger who can pop 20 goals and play a physical style. He’s not a perfect player, but if he’s replacing Dominik Kahun on last year’s roster, it’s a real improvement for the club.

There are some issues with this fit, however.

DeBrusk is entering a contract year, and will be an RFA after the 2021-22 season. He’s set to carry a cap hit of $3,675,000 this season, and then will require a qualifying offer of nearly $4,000,000 next summer. After walking Andreas Athanasiou in a similar spot a season ago, there is risk to acquiring DeBrusk.

In addition, is it a smart idea to bring DeBrusk home to Edmonton after such a difficult year dealing with media and fan pressure in Boston? The Edmonton market is understandably angry after another playoff facepalm from the Oilers, and there will be extra scrutiny on every move Holland makes. For a player looking to reset mentally, is this really the best landing spot?

Lastly, what will the price be to acquire DeBrusk? The Bruins are likely to look for a little more help on defense, but Ethan Bear should be off limits. Bear has a higher ceiling than DeBrusk, and should end up being the more valuable player.

Would the Bruins take a young defenseman like Caleb Jones, considering their struggles on the left side, and heavy forward Zack Kassian? It’s unlikely, but worth asking.