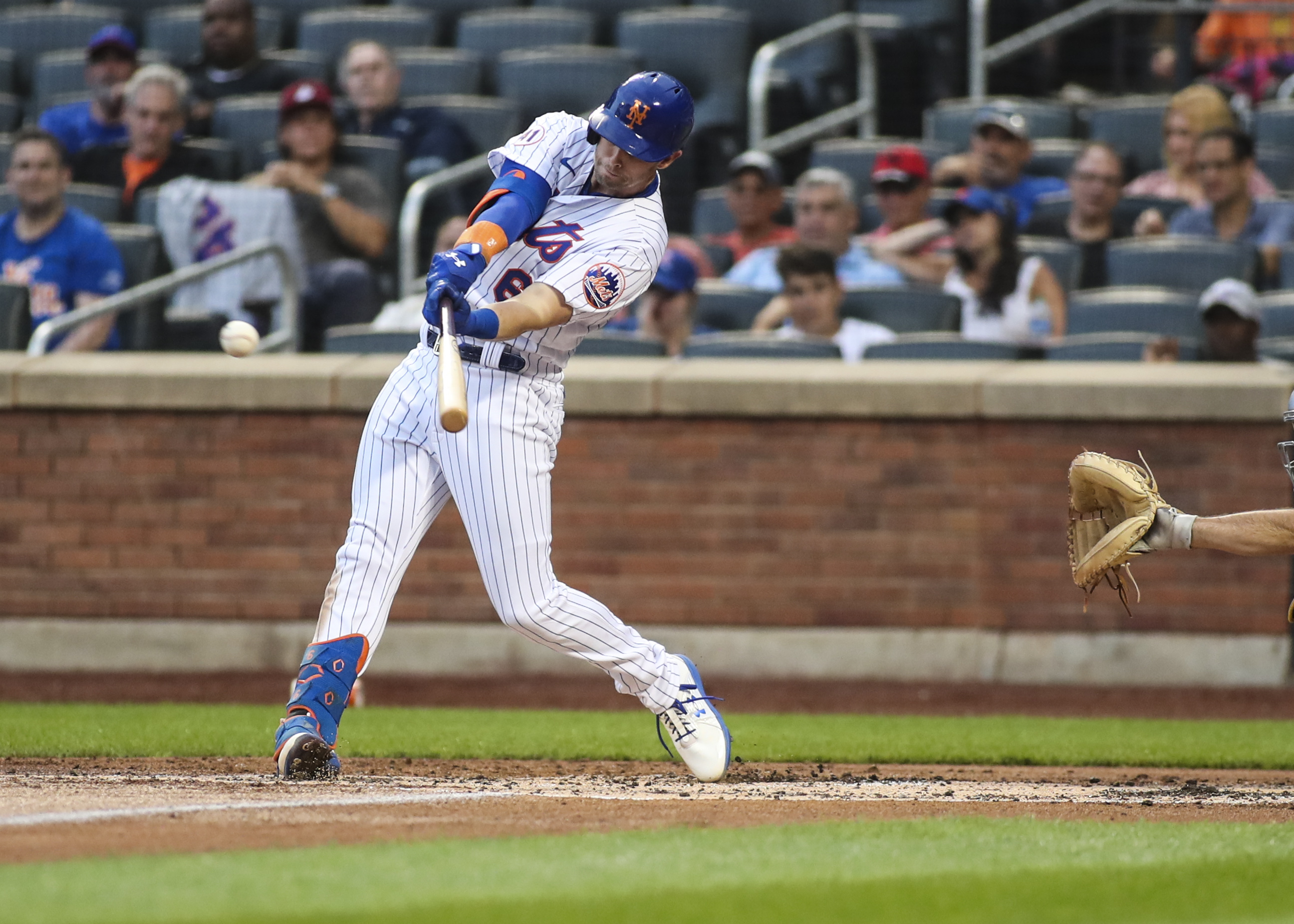 New York-Doubleheaders are hard to sweep, a fact that the New York Mets have come to learn this season. The Mets have already played ten doubleheaders this season and have secured a sweep in just two of them, including today’s twin bill against the Pittsburgh Pirates. The good news is that the Mets (47-39) haven’t gotten swept in a doubleheader either, securing eight splits, a trend that continued today when the Pirates (33-56) won Game 1 by a score of 6-2 while the Mets won the nightcap by a final score of 3-2.

The early game saw Marcus Stroman get off to a quick start, retiring the first nine Pirates to face him, including an epic catch from Brandon Nimmo with two outs in the bottom of the first. Bryan Reynolds took Stroman deep to right-center before Nimmo lept and stuck his glove over the wall, catching the ball at the apex of his leap to rob the Pirates of a homer.

Nimmo himself played the role of catalyst in the bottom of the first, singling to right field and advancing to third on a Dominic Smith single before Kevin Pillar drove him in to give the Mets a 1-0 lead.

Kevin Pillar drives in the first run of the day for the Mets! pic.twitter.com/3gL08Ah123

The Mets had a chance for more but Jonathan Villar struck out with a pair on against Tyler Anderson to end the inning.

Stroman (L, 6-7) finally ran into trouble in the fourth when Adam Frazier singled to lead off the inning and advanced to third on a hit from Reynolds. It looked like Stroman was about to escape the inning without any damage by striking out Ben Gamel before John Nogowski doubled home the runners, giving Pittsburgh a 2-1 lead. That lead wouldn’t last long as Villar took Anderson deep for a solo homer (9) in the bottom of the inning to tie it back up at 2.

The game turned the wrong way for the Mets in the fifth, when Stroman faced Anderson, who stroked a shocking solo homer (1) to give the Pirates the lead back at 3-2. Stroman got through the inning to finish the day with three runs allowed on five hits while striking out five, but the damage was already done.

The Mets were clearly deflated by that homer and Anderson (W, 5-8) capitalized, allowing just the two runs on six hits while striking out two over five innings to qualify for the win. The Pirates gave him plenty of insurance in the next two innings as Reynolds launched a two-run bomb (16) off Trevor May in the sixth and Ke’Bryan Hayes doubled in a run against Drew Smith in the seventh to cap the scoring.

The storyline of this game, aside from a rough outing out of Stroman and May, was the lack of offense against a left-handed starter. This was exacerbated by an analytically driven lineup that saw the Mets rest Michael Conforto and Jeff McNeil in favor of Kevin Pillar and Jose Peraza, significantly shrinking the lineup. The return of J.D. Davis next week should help but the Mets could definitely use a stronger right-handed presence in their everyday lineup as they run into tougher lefties against contenders.

The tide turned for the Mets in the nightcap early when McNeil came through in the first with a two-run double against Pirates’ starter Max Kranick to give New York an early 2-0 lead.

Jeff McNeil with a 2-run double to give the Mets the early lead! 💪 pic.twitter.com/BRLvpqpMLF

Mets’ starter Tylor Megill had his good stuff working early, racking up seven strikeouts on the night. The issue for Megill was his command, which led him to walk three batters as well. The Pirates got on the board in the top of the third when Reynolds singled home a run, making it 2-1. The Mets were able to get that run back in the bottom of the frame when Alonso ripped a solo homer (17) to left off Kranick (L, 1-1) to make it 3-1.

PETE ALONSO WITH ANOTHER DINGER!🚀

Megill ran into more trouble in the fourth after recording his first two outs via the strikeout. Jared Oliva drew a walk while pinch-hitter Wilmer Difo reached on an infield single, putting the tying runs on base ahead of leadoff man Kevin Newman. Luis Rojas didn’t take any chances with a rested bullpen, pulling Megill in favor of Jeurys Familia (W, 4-1), who got Newman to ground into a fielder’s choice to end the threat. That closed the book on Megill, who finished his fourth big-league start with one earned run allowed on four hits and three walks while striking out the aforementioned seven Pirates.

Seth Lugo then came on for the Mets in the fifth, which he worked cleanly, before Pirates’ catcher Jacob Stallings hit a one-out homer (7) in the sixth to cut the Mets’ lead to just one run. That would be the only run the Pirates scratched across against Lugo and the Mets got it right back in the bottom of the frame when Billy McKinney delivered a pinch-hit RBI single to push the lead back to 4-2.

Billy McKinney drives in a HUGE insurance run to make it 4-2! 🙌 pic.twitter.com/KohU3ADJuk

The Mets turned that lead over to Edwin Diaz, who was much sharper than he had been in his previous two outings. Diaz had his good slider working early and used it often, striking out the side in order on 10 pitches to record his 19th save of the season.

The Mets will look to secure a series victory as they wrap up the first half against the Pirates tomorrow afternoon. There hasn’t been an official starter named for the Mets as of post time but Rojas indicated prior to Game 1 that the team will likely stay away from using Jacob deGrom on short rest, instead going with a bullpen day. The Pirates will send righty Chase De Jong (1-3, 5.08 ERA) to the hill to try and salvage a series split. First pitch is scheduled for 1:10 p.m. at Citi Field.