Will There Be Earplugs? 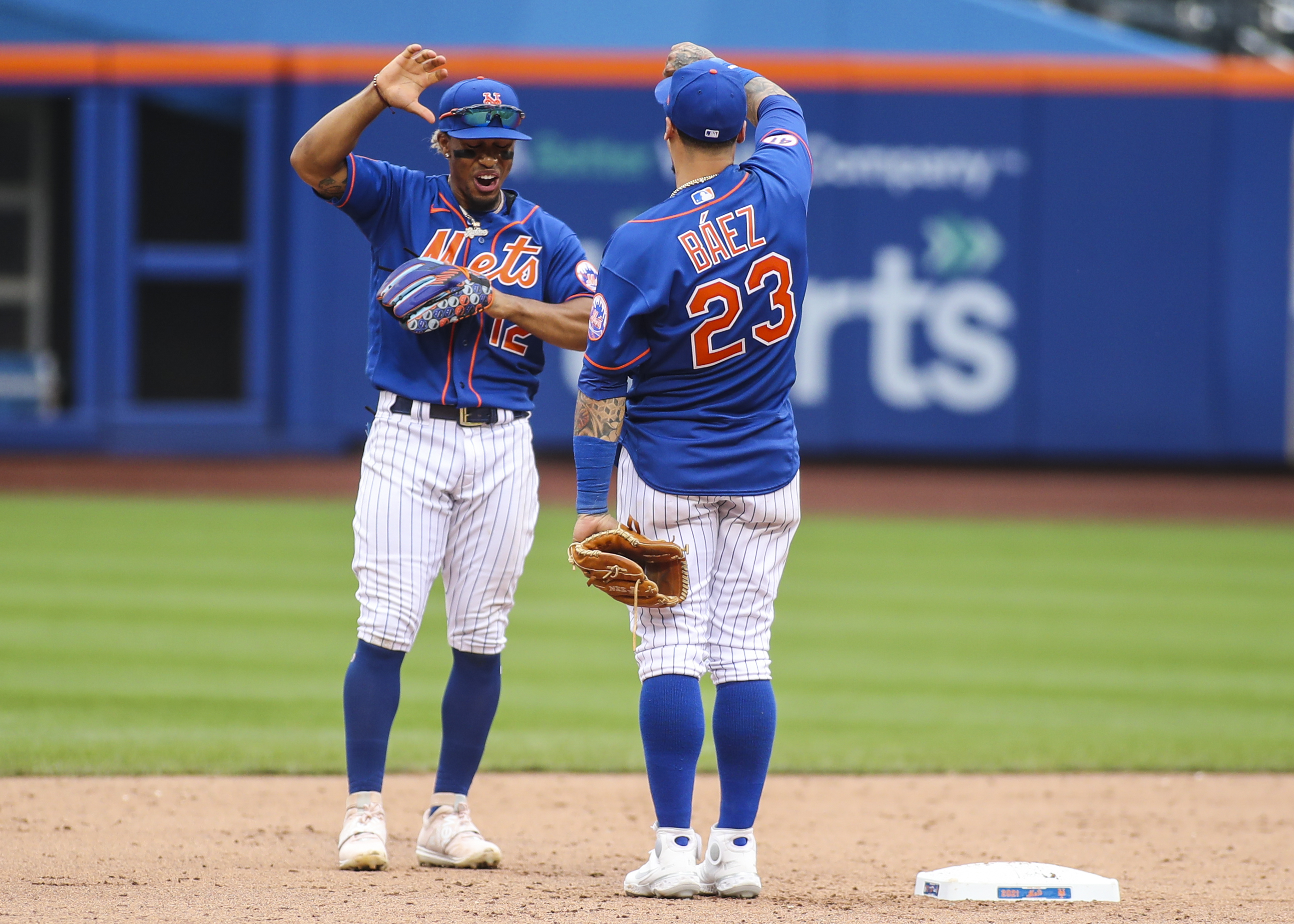 Will There Be Earplugs?

It just might be because I’m getting old, but I can’t remember the last time I booed a Mets player.

I mean sure, I marched down to the Mets dugout in Washington and fired Jerry Manuel, but honestly, who hasn’t?

But, and I’m only speaking for myself, I’ve thought for a long time now that booing your own players should be limited to an obvious lack of effort, and embarrassing yourself and the franchise with an egregious act of stupidity off the field. That said, booing as an act of frustration at the end of ballgames after long losing streaks, for example? Hey, it happens. I’ve always thought that a lot of booing is just that. Frustration. I know a lot of booing that happened in seasons like 2020 were more directed at the Wilpon family and Brodie Van Wagenen. Heck, if people like that were made available to boo at, maybe while they’re sitting in a dunk tank, it would deflect a lot of booing from the players. If I could sit a Mets player past, present or future down and warn him of this, I would. Don’t take it personally.

But Javy Báez took it personally.

Francisco Lindor, Javier Báez and Kevin Pillar were among those Mets players to flash thumbs-down signs after their hits today.

I don’t expect Javy to understand the frustration of the Mets fan. He’s been here for a month while we’re here forever. We were here before him, and we’ll be here long after he leaves. I also don’t expect him to understand the New York fan base after playing his entire career in the city of Chicago. Chicago is a great sports town, but there’s a lot of “midwest polite” in Chicago. It’s not New York. New York is tough, sometimes unfairly so. But they’re honest. That’s why there was such frustration about Pete Alonso’s positivity after the Phillies series. While I thought Pete was coming from a genuine place with those comments, a lot of fans took it as Pete peeing on their leg and telling them it’s raining. I understand that completely.

Mets fans will love you forever if you produce. They’ll love you forever if you understand them. And they’ll love you forever if you’re a husky pitcher who hits a home run because you have too much pride to keep striking out while your helmet flies off. But Mets fans will also be honest with you. Maybe all Báez was doing was giving the fans a little honesty of his own. Was he right? Maybe. Are fans who think it is never acceptable to boo a player for striking out right? Probably. But it’s not about what I think or what you think or what Javy thinks things should be. It’s about the way it is. The way it is is that if you come across as being against the fans, then the fans are going to be against you ten times as hard. Javy should have realized that, and now he’s going to hear about it on Tuesday. 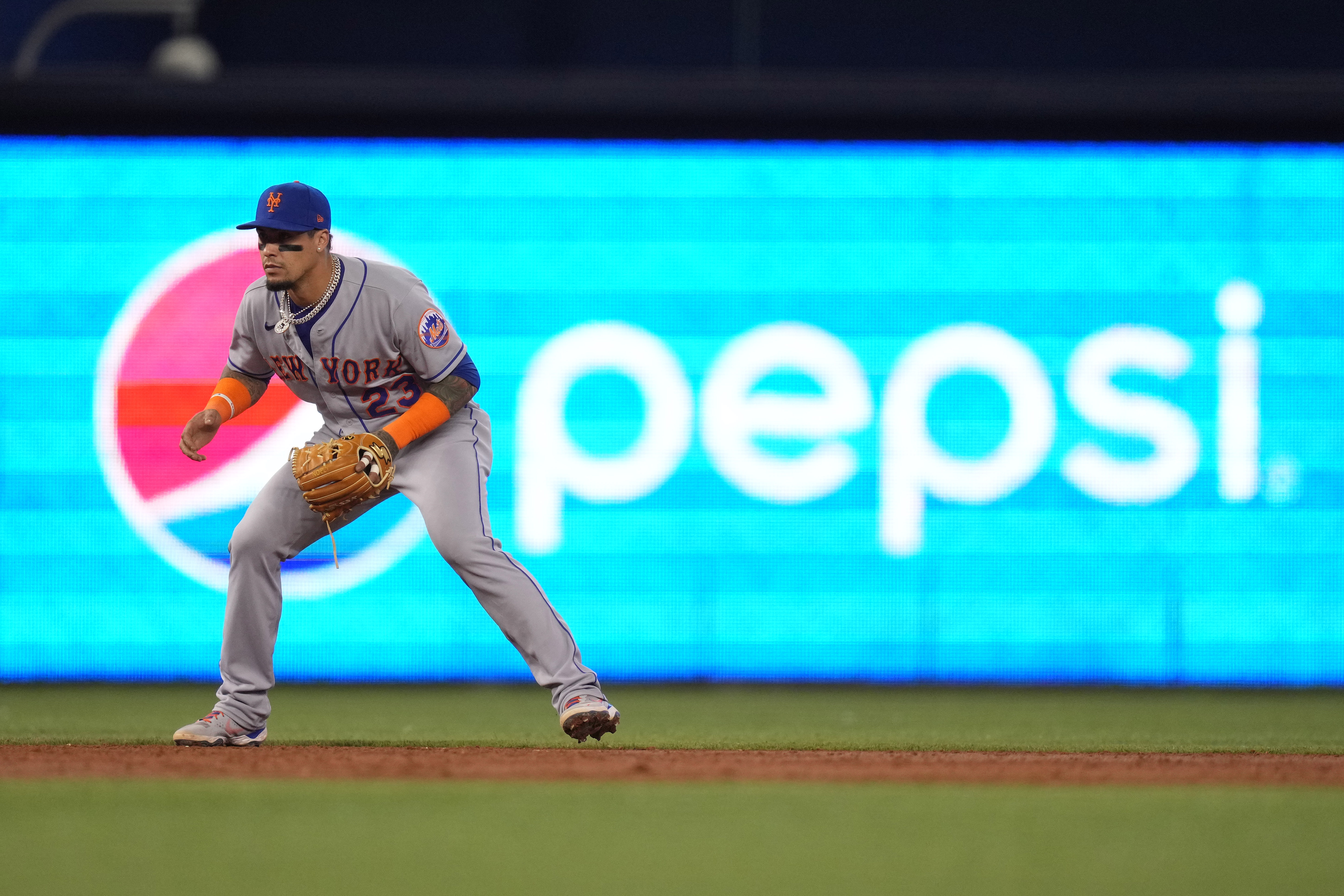 Giancarlo Stanton had a playoffs for the ages in 2020. He hit .308 with an OPS of 1.406. Hit six home runs in 31 plate appearances. Drove in 13 runs. Was the only reason the Yankees made it to Game 5 of the ALDS against the Rays. He struck out three times on Opening Day and was booed. Yankees fans have booed him mercilessly over his four year Yankee career. Here’s how he responded:

"I try my best when I'm out there, so I can't worry about all of that"

Giancarlo Stanton discusses his grand slam tonight, and dealing with booing early on in the season pic.twitter.com/DBqv8n1i3g

I’m sure there have been plenty of days since 2018 when Giancarlo wants to tell Yankees fans to shove it. If I was Stanton, I probably would have said something stupid by now. But Stanton understands that any response like that will cause way more harm than good for him. Forget about hurting the fans’ feelings. Stanton doesn’t owe fans anything. Javy Báez doesn’t owe Mets fans anything. Players don’t owe fans anything. But letting sleeping dogs lie because you understand the way it is will be better for you than honesty because of the way you think things should be. Stanton understands this. Báez is about to figure out what happens when keepin’ it real goes wrong.

It has started already:

Leave it to a tabloid to turn this into an extreme overreaction. No, he wasn’t telling fans to “go to hell”, but now fans have license to be especially loony in response to this, and the fringe is going to be all over him because of headlines like this. It couldn’t have been worth it for a cutesy little “thumbs down” celebration. Shoulda just did the churve sign like everybody else.

Love y’all too! Felt nothing but love in NYC. No I’m not booing the fans. We are having fun. No different than earlier this year when we were churving 👌🏽. please don’t look to much into this. https://t.co/0jwnnN8mZ1

Kevin Pillar apparently did the thumbs down also, as well as Francisco Lindor. Lindor is surprising because of all the players on the roster, he has been the one that has acknowledged the results of the play instead of just marveling at the process. But he’s probably just following along with his buddy Javy. As for Pillar? He’s either acknowledging a disconnect between their intentions and our perception of their intentions, or he’s partaking in damage control. As for why he joined in? I just have no idea.

Maybe he’s laughing because he knows something none of us do. Maybe this is all a bit of Andy Kaufman performance art and we’ve all been had. In any event, Walker should be careful because apparently Generation Z have decreed that if you use the crying/laughing emoji, you’re old.

Only if you’re a gladiator and I’m the Roman emperor.

Trevor May’s entire timeline has been thoughtful and insightful in response to this, and he has proven why he’s one of the best baseball follows on social media. I’m appreciative of his efforts to lend some sanity to the situation.

Honestly, I just don’t think it was explained well. I take it is an acknowledgement that some people aren’t happy and are going to constantly let you know about your failure. So take it and switch it up and make it work FOR you and not against you. Does that make sense?

Maybe Javy’s biggest mistake was wording his explanation wrong? Does it make it any less of a bad idea to even go there? A simple answer like “the thumbs down is something personal within the roster and I’ll leave it at that” would have sufficed. Or maybe it wouldn’t have because the New York media likes to hound you for everything, but it wouldn’t have been any more ridiculous than “we were arguing over whether it was a rat or a raccoon.” They left Lindor alone eventually after that.

But then came the big one: an official press release … 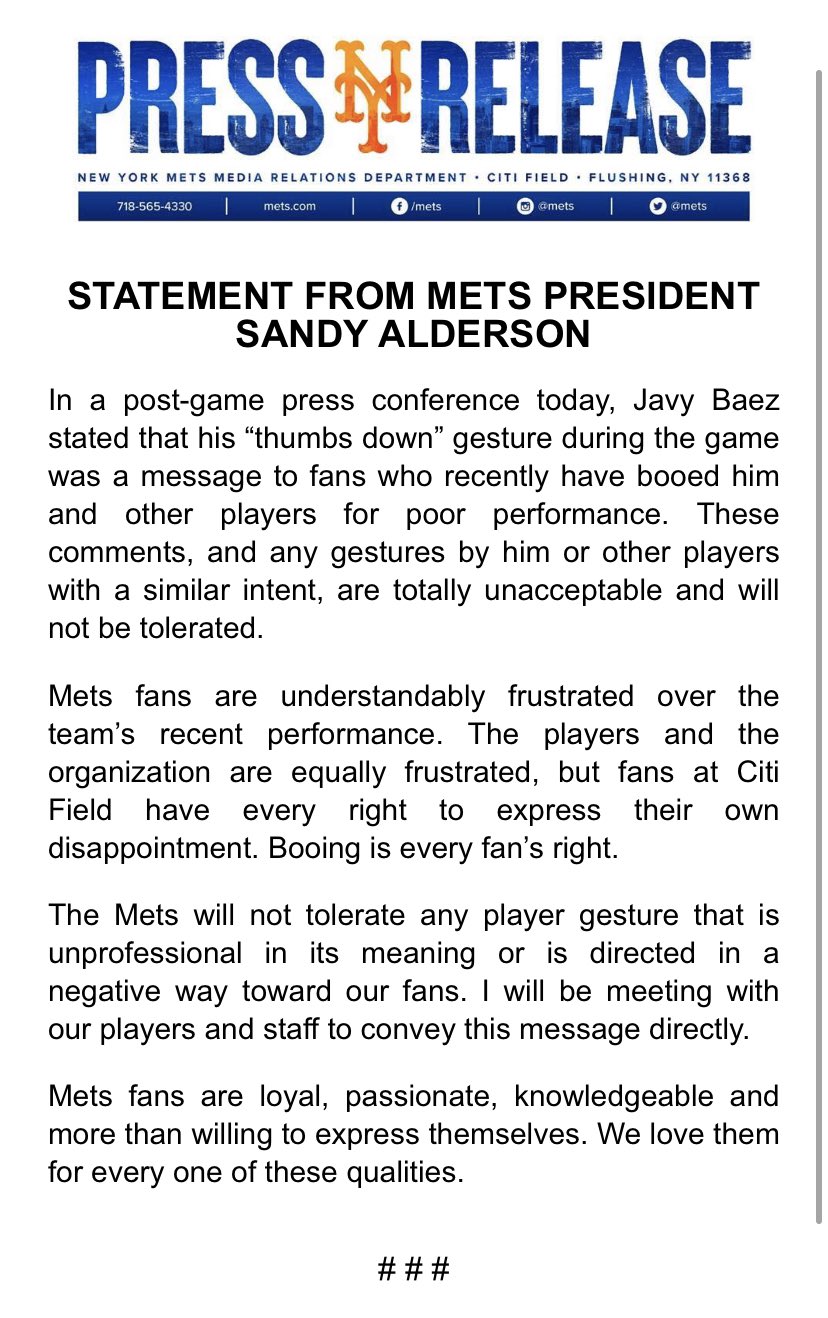 The “I will be meeting with our players and staff to convey this message directly” line? Ohhhhhhhh that should go over well in that room. (Editor’s note: I love how Sandy has to be the one to do this because the manager, Luis Rojas, who manages, and he’s in that clubhouse, had no idea what the thumbs down meant.) But then what? Will Báez have to apologize in a press conference as if anybody will believe the sincerity of it? Perhaps he will be sincere. Maybe he realized a few seconds after he said what he said that “oops, this isn’t going to end well for me.” Will that matter to anybody? Will he understand why what he said was a bad idea, right or wrong, and should we really expect him to at this point? Will this press release do more harm than good?

The only way to fix this is for Báez to shoot a tongue-in-cheek commercial for something where he goes from office to office and breaks into their board meetings and truck loadings and their sandwich making and boo the hell out of every single one of them. But it’ll never happen because whereas before when it was 50/50 as to whether Báez would come back here on a long term deal, now it’s apparent that Báez isn’t going to stay long enough to meet the marketing department. It’s a shame, too. The Báez trade was a signal that things were about to go right. Things had been right for about four months. With all the injuries, the early part of the season was more right than we should have ever expected. But now it’s obvious things here are very, very wrong. As usual. And that’s why we boo. It’s nothing personal. That is, until Tuesday.

Just don’t wear earplugs, Javy, whatever you do.