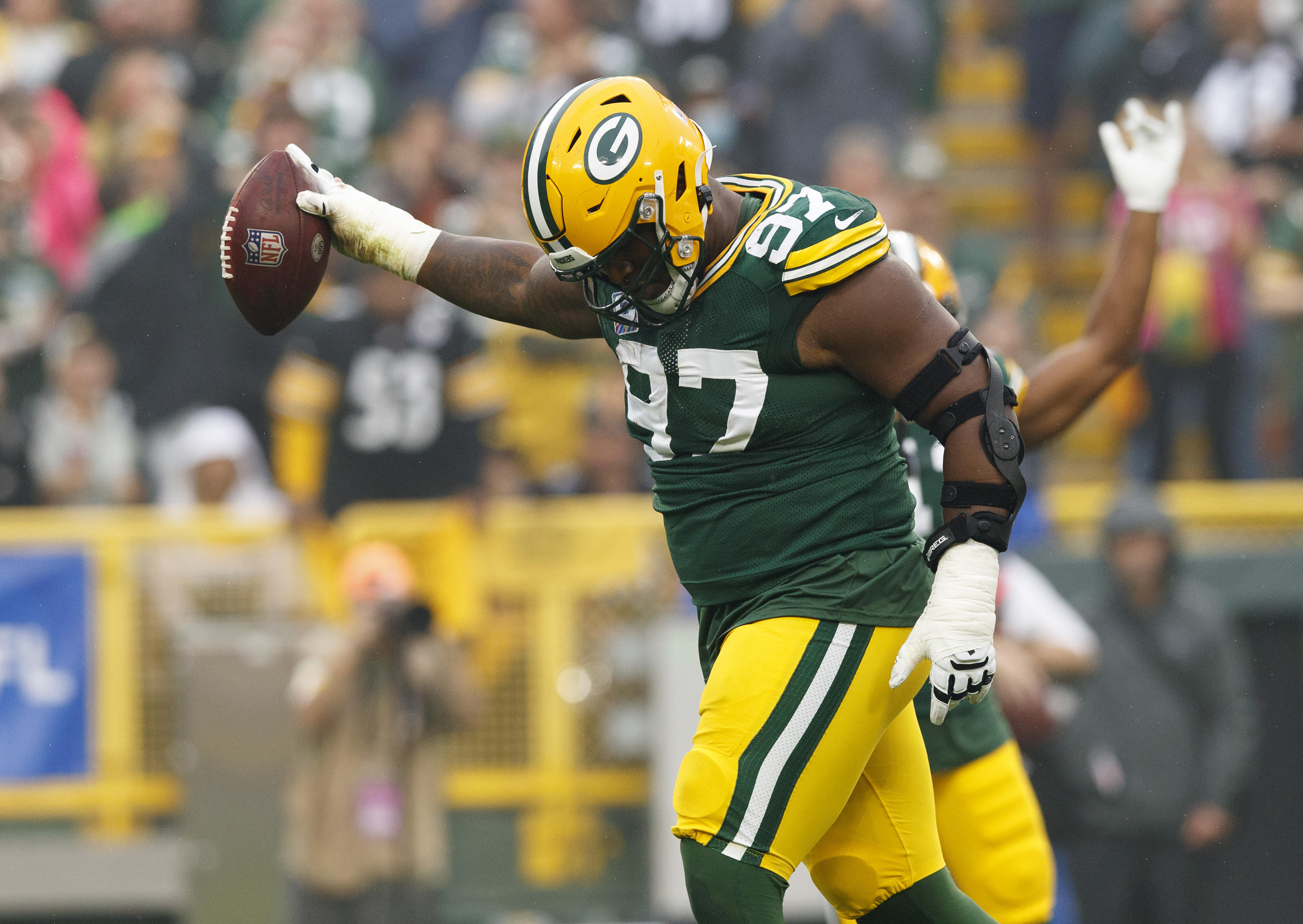 The Green Bay Packers had just taken a 24-14 lead over the Chicago Bears. Chicago got the ball back with 4:30 left on the clock at their own 42 and proceeded to march the ball to the Packers 32 where they had the ball 1st-and-10 with 3:39 remaining. If the Bears could score on this drive, it would be a one possession game and the Bears still had all three timeouts remaining.

On first down, Justin Fields took the snap out of the shotgun and looked downfield. Packers defensive lineman Kenny Clark powered past his man and sacked Fields for a 12-yard loss.

One play later, the Bears were facing 3rd-and-15. As Fields rolled out to avoid pressure, Clark made a spin move and released from his blocker to sack the Bears quarterback for an 11-yard loss.

An incomplete pass on 4th-and-26 ended the Bears last threat and the Packers were able to run out the remaining time on the clock.

Clark has been a dominant player for the Packers defense this season. Here are four reasons why Clark has been playing so well so far in 2021:

Clark was injured in the Packers season opener in 2020 in Minnesota and missed the next three games. Although the UCLA alum returned to action after the bye week, it took him a while to get healthy enough to return to his previous Pro Bowl form of the year before.

By the time December rolled around, Clark was once again playing at an elite level and he played some of this best football in the Packers two postseason games.

This year, Clark is once again healthy and it has made an impact. As Clark said himself after the win over the Bears, “It’s just me being healthy, that’s the biggest thing,” he explained. “As long as I’m healthy, I know that I’ll be me. The second is just not worrying about anything but doing my job, making plays that come to me, being physical at the point of attack. I think my get-off this year has been a lot better than last year. That’s a huge part of my game.”

Clark has been healthy and as a result, he’s been dominating opposing interior linemen. The proof is in the numbers. Already this season, Clark has three sacks and five tackles for loss. In all of 2020, he had two sacks and three TFLs. In six games this year, Clark has 11 quarterback pressures. Last season he had 12 pressures in 13 games.

Clark made the Pro Bowl in 2019. If he continues to play the way he has all season, he should be selected to the Pro Bowl again this season and may even contend for All Pro honors.

During the offseason, Clark and several other Packers defensive players lost weight in anticipation of the new roles they’d have to play in Joe Barry’s defense. By losing a few pounds, Clark was able to add a little bit of quickness to his game without sacrificing strength. The result is that he’s gotten off the ball faster and been able to add another weapon to his arsenal of tools that can help defeat blockers and get to the ball carrier.

Under Mike Pettine’s defense, Clark almost always lined up at nose tackle, directly opposite the opposing center. That often meant that his primary responsibility was to occupy multiple blockers to help free up teammates to make plays.

This year, however, in Joe Barry’s new system, Clark has lined up in different places along the line including opposite offensive tackles (4-technique) which allows Clark to get favorable matchups and frees him up to make plays himself instead of just occupying blockers to help others get to the football.

Another factor in Clark’s improved play has been the better play of his fellow defensive linemen. Kingsley Keke has had some impactful moments and Tyler Lancaster played well before getting hurt, but over the last few weeks, Dean Lowry’s play has really improved significantly.

In the last two games, Lowry has knocked down two passes and recorded 1.5 sacks. He has also made seven total tackles. Lowry is well ahead of his pace of a year ago in nearly every statistical category and is having a bigger impact on games.

With Za’Darius Smith on IR, the interior line has been called on to provide more impact plays and Clark and company have been getting it done during the Packers five-game winning streak.

Clark is now back to his dominant self and that is very good news for the Green Bay defense.