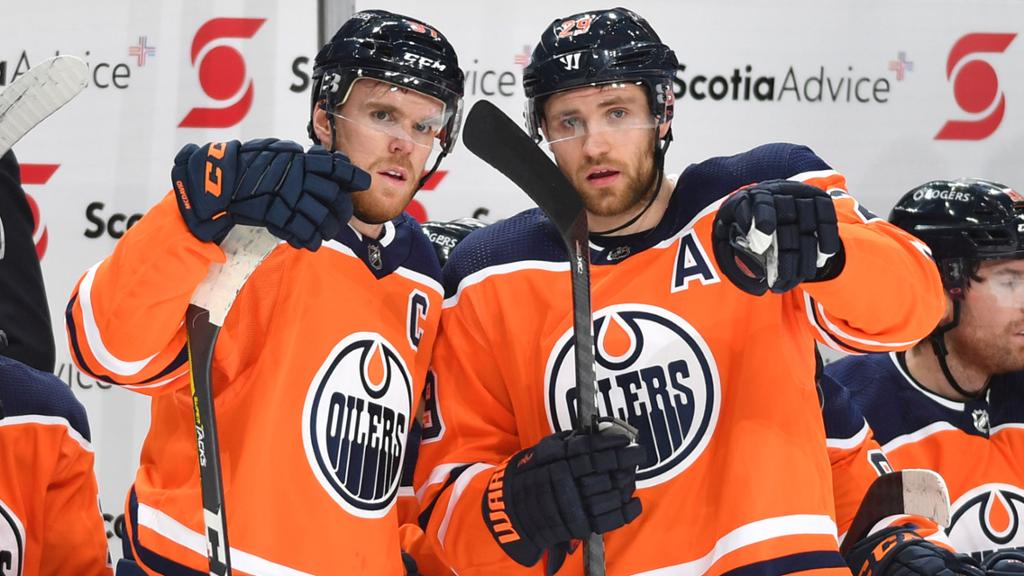 10 games into the Oilers season and the team sits tied 2nd in the league, 3 points behind the 10-0-1 Florida Panthers. It’s been a fantastic start by a great many counts, and we’ve already learned a lot about the group, some of the offseason changes, and some of the growth of individual players as well as that of the team as a whole.

Let’s start with looking at a few key team statistics to help describe how the Oilers are doing versus last season.

These 3 metrics are common for conveying the general flow of play, Corsi measuring shot attempts, while expected goals (xG) and high danger chances are more subjective but factor in more information such as where the shot was taken from. Granted, it’s still early and these numbers will stabilize with a larger sample size, but there is a story within the improvements made in each of these metrics. There’s no need to hope for the Oilers to lead the league in these categories, but trending above 50% is a great start. In particular, the high danger chance % from 20-21 was absolutely not good enough, and we’ve seen a huge turn around so far when it comes to the Oilers defensive integrity at even strength. Perhaps this can be attributed to the changes on the blueline (yes Ceci and Keith, but also Bouchard) and veteran additions to solidify the forward group (Hyman, Ryan, and Foegele). Often teams with elite-offensive-game-breaking-talent will need less control of Corsi (the Penguins hovered only slightly above 50% in their back to back Cup seasons), but overcoming a disparity of high danger chances is much nearer to impossible.

Often measuring goalies is likened to voodoo, and PDO is described as luck (shooting % and save % added together). For the second straight season Smith and Koskinen are outperforming what the general public expects from them, posting respectable results close to league averages. Perhaps less impressive this year, thanks to their aforementioned defensive improvements, but given how much time Smith has missed already it’s an impressive and seemingly sustainable situation. Implied within the PDO is a shooting percentage that is slightly above league average, which makes sense for the talented Oilers group. A 101 PDO is not too out of the ordinary, which is to say the Oilers start has not been overly influenced by unsustainable shooting or goaltending performances.

Coach Tippett always seems to have the special teams working well, but the Oilers have carried an absurd 50% power play through their first 10 games. Yes, you figure a unit with so much talent would be good (easier said than done), but given that the best full season % of all time is 31.9 (Montreal, 77-78) it is still quite shocking. One would think that the pp is bound to cool off, but if anyone could break the longstanding high water mark it would be this team. The pk has been slightly better than last season by a smaller margin at this point, but that in itself is impressive given the roster turning over has changed the personnel drastically. In the regular season the strength of both special teams completely raises the bar in terms of what opponents need to bring in order to defeat the Oilers. Opponents will need to be detailed and relentless in their attempts to break through the Oilers special teams as well as in staying out of the penalty box. It should however be noted that for better or for worse special teams are less prevalent in the playoffs, and in general pk numbers will carry over more reliably than pp numbers, which makes the Oilers improvements at even strength all the more important.

McDavid and Draisaitl: sure we knew they were all that, but somehow the dynamic duo has an added aura about them. Of course, so much of the Oilers success, especially on the power play, has a lot to do with these two.

Puljujarvi: long gone are the days where it seemed like everything was going wrong for the big Finn in Edmonton, as he’s continued to expand his game and confidence. These days everyone is a fan of Jesse, they say even Flames fans can appreciate his talents and enthusiasm. It’s great to see him enjoying his success and the adoration of fans after the bumpy road since his draft night.

Hyman: since his debut in the league he has worked hard, but each year he seems to add more skill to his game. Any concerns about leg injuries have quieted, while comparisons to Oilers Great Ryan Smyth tell us it’s gone very well for Hyman early into his Edmonton tenure.

Bouchard: well known for his offensive skills, Bouchard has shown there is a lot more to his game, as he’s quickly earned ice on the top pair with Nurse and been used regularly on the pk. Through the early part of the season Bouchard’s play is a huge reason to think this blueline is better than years past.

Koskinen: the Oilers backup takes a lot of criticism, and ever since he signed his current contract there has been a vocal skepticism towards his play. Even amidst this strong start to his season, going 7-1-0, people seem to be happy to bring up that he’s not good enough. It’s true the Oilers do not garner attention as the league’s best goalie tandem, but it’s a pair that’s managed to play well with a reasonable price tag. The biggest fear would be the exact situation the Oilers are currently overcoming, Mike Smith being injured and Koskinen having to play for a long stretch.

Shore: Sunday during media availability Coach Tippett noted that Devin Shore will miss the next 4-6 weeks with a lower body injury. Coming off of a separate lower body injury at the beginning of camp, Shore was coming off a strong stretch of play that saw him elevated (circumstantially) to the 3rd line. Given that the Oilers are embarking on a road trip, we could see a forward called up from AHL Bakersfield (McLeod perhaps being the most logical) but we might also see Turris kick inside to the centre position while Tyler Benson comes into the lineup. Colton Sceviour might get a chance to work his way back into the lineup as well. Tippett noted they were still considering their options in this respect, but nonetheless we will be hoping for a full recovery for Mr. Shore.

Keith: despite how great everything surrounding the team has been early this season, the same cannot be said about the newly acquired veteran defender. Beginning with his unvaccinated status to open camp (which has since changed) and further into his refusal to participate in the investigation into the Blackhawks, Keith has been central in undesirable ways. I hope that Keith has truly come to realize where and why he was wrong in these instances, which is never an easy thing to do, but always an important one. Even more so, I hope that Keith’s fans and teammates can learn from these disappointments as well, as these issues are far from unique to the player. Keith has since been vaccinated, and appeared shaken in his media availability following the Blackhawks investigation. Hockey culture as a whole has a long way to go before even catching up to the rest of the world, and the results of the investigation and the actions and interviews since demonstrate that fact pretty clearly. Hopefully Keith, his teammates in the past and present, and the hockey community at large (including you and I) can take some of these heavy issues on and change the sport for the better.