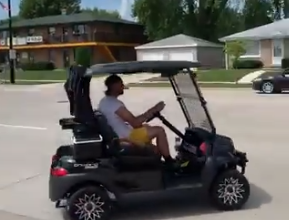 Aaron Rodgers is viewed as a legend in Wisconsin, so he can essentially make his own rules.

That logic applies to traffic, apparently, when he decided to just casually parade around downtown Green Bay while driving a golf cart.

Rodgers was spotted rolling up to a stop sign in the golf cart, when he attempted to make himself known by honking its horn a few times.

The MVP casually rolling through town in his golf cart. While obeying traffic laws. And listening to music. #Vibe #PackersCamp pic.twitter.com/eCDpmi8zUY

Now that he’s reported to training camp, Rodgers is viewed as a hero by Packers fans once again, so he’s apparently trying to have some fun along the way, even if it does end up being his final season in Green Bay.