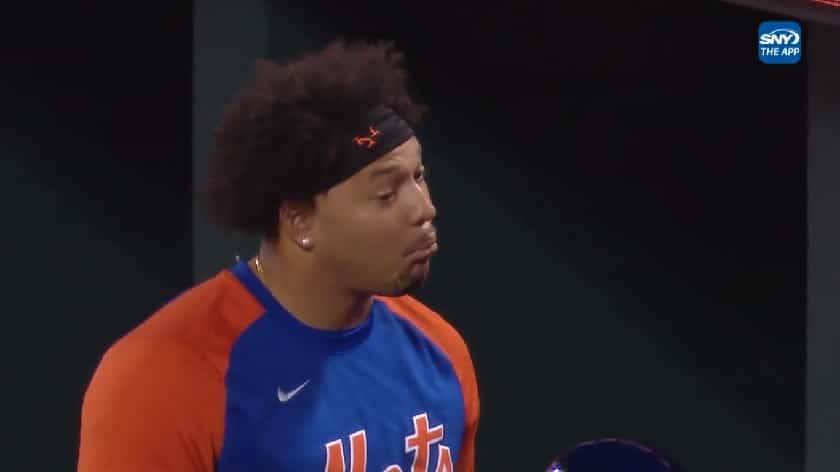 The only thing keeping Thursday’s game from feeling like a true playoff game was the 7 train having issues getting people to the ballpark. The first inning looked like 2010. But by the end, there were plenty of fans, and there was plenty to talk about.

The Mets put runs on the board the way the Braves usually do: dingers. After a Pete Alonso RBI single in the first, Tyler Naquin blasted his first homer of the day to make it 2-0 in the 2nd. Then in the third, Alonso and Daniel Vogelbach went back-to-bach to give the Mets a 5-0 lead. After the Braves rallied for three in the 5th, Naquin his his second of the night to make it 6-3, and I thought at that point the rest of the game would be stress free. It was anything but.

Carlos Carrasco went six good innings, striking out six while giving up four hits and a walk resulting on those three Atlanta runs in the 5th. He was relieved by Adam Ottavino in the 7th, and after he lost Orlando Arcia after going 0-2 on him, he gave up an RBI single to Michael “Might As Well Be Willie” Harris to make it 6-4. But Ottavino bounced back to strike out Ronald Acuna Jr. to end the inning. Then the fun began.

Buck Showalter has brought in Edwin Diaz in the 8th inning before, so to not bring him in to Thursday’s 8th inning against Dansby Swanson, Matt Olson, and Austin Riley would have been negligent at best, criminal at worst. It was the easiest call on the board. And Diaz was his Diaz-self, getting Swanson on a ground out and striking out Olson and Riley to end that threat. Certainly, Diaz wouldn’t go out there for the 9th, right? He was done, right?

I have to be honest, I wouldn’t have done it. I would have trusted the rest of the bullpen to get 5-6-7. But after Diaz only threw 11 pitches, Buck thought that this was the time to do it … against the Braves in the biggest series of the year. If it didn’t work though, the impending loss would have been gut wrenching. Dare I say, Pendleton-esque. And after Diaz led off the 9th by giving up an 0-2 single to Eddie Rosario then going 2-0 to Travis d’Arnaud, I thought “oh shit, Buck fed a mogwai after midnight and now 2022 Diaz has turned into 2019 Diaz.” Because what I was afraid of was happening. Diaz was starting to look normal for the first time in a month.

But thankfully, Diaz got d’Arnaud and Marcell Ozuna for the first two outs of the innning without his very best stuff. Then with the count 3-0 on Arcia, the crowd getting nervous, and Kurt Suzuki, Jean Segura, and Jacob Stallings all fighting through the corn fields to get to the on-deck circle, Arcia helped us to the victory in the first game of the huge five game set:

Well, there are a few others. But whatever gets you to sleep at night, man.