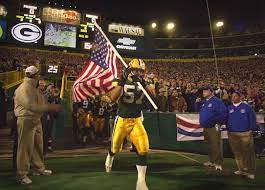 Twenty years ago, the entire country was stunned in the immediate aftermath of September 11th. The United States had been attacked on its home soil and thousands were dead. Nobody was sure if the terrorist organization that carried out the deed could strike again and nobody knew if it was safe to gather in large crowds or to resume aspects of normal life.

The attacks affected the NFL as well. For the first time in recent memory, the league canceled an entire week of scheduled games. The Packers were supposed to travel to New York to face the Giants just about 10 miles from Ground Zero but that game was canceled. The entire country was in shock and football took a back seat to the events the country was dealing with.

“I just remember that uncertainty. That week was such a roller coaster. It was just a myriad of emotions,” recalled Packers offensive tackle Mark Tauscher. “A lot of guys were freaking out about getting on a plane, and nobody wanted to get on a plane to go to New York to play. I don’t know how the decisions got made. Guys want to play football, and there was a desire to get back to normalcy, but it just wasn’t right yet.”

The NFL made the decision to resume play the following week. The Packers were hosting the Washington Redskins (now the Washington Football Team) on Monday Night Football. The entire nation would see the Packers host this monumental game.

The most memorable moment took place pre-game. The cameras panned across Lambeau Field as the Packers came out of their locker room and ran onto the field. They were led by former Air Force Academy alum Chris Gizzi who ran out of the tunnel and onto the field carrying an American flag. He ran across the field, got to the far end zone from the tunnel and waved the flag to an emotionally charged crowd.

“I was thinking about the game. But I got the flag, I stepped out, and the crowd went nuts,” Gizzi remembered. “The ground started shaking. And I just took off running. The crowd carried me across that field.”

After that, the game was almost anti-climactic. The Packers came out and dominated Washington from start to finish. Brett Favre threw three touchdown passes, Ryan Longwell booted three field goals and running back Ahman Green ran 25 times for 116 yards as the Packers cruised to a 37-0 win.

On the other side of the ball, the Green Bay defense was dominant. Washington had only eight first downs all game and gained just 137 total yards. The Green Bay defense sacked quarterback Jeff George five times led by Santana Dotson, Kabeer Gbaja-Biamila, Vonnie Holliday and Billy Lyon with one each while Nate Wayne and John Thierry had a half sack each. Wayne also had an interception.

“I think we’re a very strong defensive team,” Packers safety LeRoy Butler said after the game. “We’re doing some good things. On third down, when we have our athletes out there, we’re close to arrogant.”

Favre finished the day by completing 20-of-31 passes for 236 yards. He also threw touchdown passes to Antonio Freeman, Bill Schroeder and Bubba Franks.

The only major mistake Favre made was an interception in the end zone just before halftime that kept the score close at intermission, a 10-0 Packers lead. But the home team overwhelmed Washington in the second half, scoring 27 more points.

The Packers closed out the scoring with three minutes left in the game when reserve running back Rondell Mealey recovered a fumble on a kick return and ran it back 27 yards for the final score.

“We came out in the second half and played physical football,” Packers head coach Mike Sherman said. “At halftime, I told the team if they really wanted to be a championship team, they were going to have to play a dominant second half. And we did.”

But the enduring image from that day was Gizzi carrying the flag across the field at the start of the game as the fans in the NFL’s smallest city cheered and our country was unified after such a horrible tragedy.

“Our hearts went out to the rest of the country. We know we live in Green Bay and not New York or Washington, but we felt their pain,” Sherman said. “We focused this week on what we had to do
and we did it.”

It was Green Bay’s small part in helping to heal the country. Twenty years later, the moment is still iconic and the game memorable.