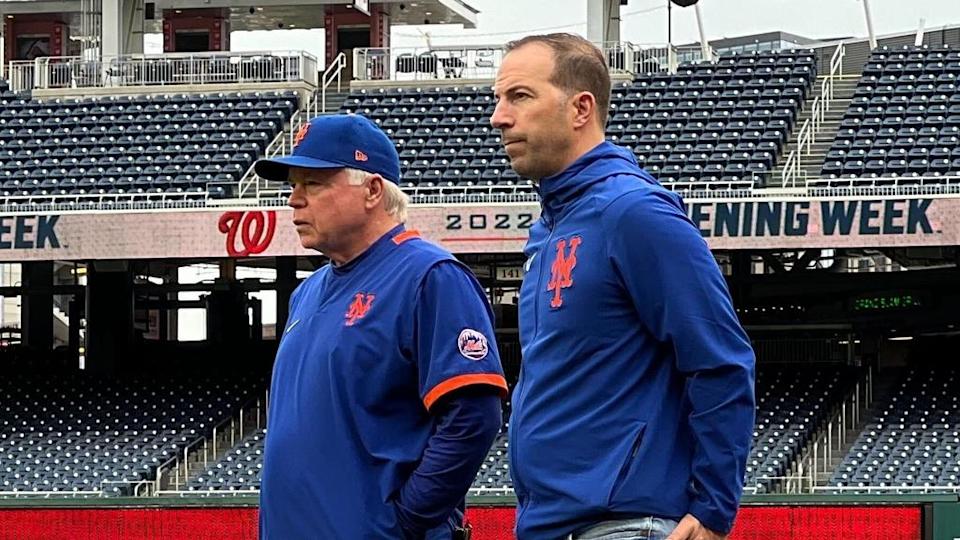 The 2022 season was both a wild success and a massive disappointment for the New York Mets, who won 101 games but couldn’t get out of the Wild Card round. Owner Steve Cohen has set a very high bar for General Manager Billy Eppler to clear given his mandate to both win a World Series title within the next three years and build a sustainable contender without mortgaging the farm system. The Mets do have a solid core in place with Max Scherzer and most of the lineup set to return next season but Brandon Nimmo, up to four-fifths of the starting rotation and the entire bullpen will hit free agency.

With a payroll set to exceed $200 million before any free agents are signed, the Mets will likely need to blow past the highest luxury tax threshold if they want to build a team capable of contending for a World Series title. With that in mind, let’s take a look at the biggest questions the Mets will have to answer this offseason.

What happens with Jacob deGrom?

The Mets’ ace is going to opt out of his contract and rumors have been swirling all summer that he wants a change of scenery. deGrom does have injury questions but is still the best pitcher in baseball when healthy, making him irreplacable even for a Mets’ team that already has Scherzer for at least one more year. Eppler indicated at his year-end press conference that he had a conversation with deGrom and feels his relationship with the team is positive so the question becomes how much money the Mets will offer him to stay.

Using Scherzer’s contract as a template could make some sense as a three-year, $135 million deal with opt-outs built in. A shorter-term deal lowers the risk for the Mets and makes sense for deGrom as he could bet on himself to keep performing well and then opt out again for a potentially bigger payday with better health. If deGrom is seeking a long-term deal of at least five years the Mets will have to think long and hard about how to proceed since his health is still an open question. The Mets will likely be the high bid on deGrom but if he wants to play somewhere closer to his home in Florida that is something they can’t really compete against without a significant overpay.

What happens with Edwin Diaz?

If deGrom is the Mets’ top free agent priority, Diaz is 1A. Diaz was arguably the Mets’ most valuable player in 2022 and there simply isn’t a good alternative to him on the open market. The good news here is that Diaz has been adamant that he wants to return to New York and the Mets need to bring him back. It might take the first $100 million contract for a closer but Diaz has earned every penny of that potential deal. Expect this one to get wrapped up quickly.

Will Brandon Nimmo be back?

Nimmo is the only Mets’ offensive starter set to hit free agency and the decision on what to do with him is complicated. While advanced analytics say that Nimmo is one of baseball’s most valuable players and he was an elite center fielder in 2022, Nimmo has a lengthy injury history that should worry the Mets. A five-year deal worth about $20 million a year is fair market value for Nimmo but agent Scott Boras will likely look for someone to significantly beat that valuation. The Mets would like to bring Nimmo back but likely at their definition of market value. Nimmo is a very good player but not an irreplaceable guy like deGrom or Diaz.

What happens with the rest of the rotation?

The Mets only have Scherzer locked in for 2022 out of their current rotation. deGrom will opt out of his contract while Chris Bassitt and Taijuan Walker will likely do the same in their deals. Carlos Carrasco has a team option worth $14 million for 2023 but his struggles down the stretch and against contenders make you wonder whether the Mets could do more with their money.

The smart money says the Mets pick up Carrasco’s option to avoid creating another hole in the rotation they will have to fill while relying on a competition between David Peterson, Tylor Megill and Joey Lucchesi for the fifth spot. That competition is a good way to create some cost efficiency on the roster as Cohen has a ton of money but may not want to field a $400 million team in 2023. Retaining deGrom and adding a third starter in free agency makes sense since Walker will likely move on and Bassitt’s comments about the New York market indicate that he may prefer a change of scenery as well.

How will the Mets build the bullpen?

Assuming Diaz returns, the Mets will still have a lot of work to do to construct the 2023 bullpen. Drew Smith is the only reliever under contract with more than 20 appearances in 2022 and he should have a big role but it takes more than two pitchers to fill out the unit. Expect the Mets to try and retain one of Seth Lugo, Trevor May and Adam Ottavino in order to maintain some continuity while adding a lefty and setup option to the group. John Curtiss, who the Mets signed to a two-year deal coming off Tommy John surgery, should also factor into the equation while the Mets will need to get some production out of young relievers like Stephen Nogosek and Bryce Montes De Oca.

Where can the Mets look to upgrade offensively?

Despite scoring the fifth-most runs in baseball last season, the Mets’ lineup lacked power and wasn’t consistent. The Mets can stand to upgrade at catcher by giving Francisco Alvarez more playing time next season while incorporating fellow prospects Brett Baty and Mark Vientos as well. The designated hitter spot could also use a face lift over the Daniel Vogelbach/Darin Ruf platoon while another outfielder with the ability to play center field could make sense even if Nimmo comes back.

What external hitters could the Mets pursue?

Every Mets fan would love to see Aaron Judge in right field next year but this is a remote possibility unless deGrom leaves and the $45 million potentially earmarked to him becomes available. Trea Turner would be another flashy addition as a potential replacement for Nimmo while Carlos Correa could look to reunite with longtime friend Francisco Lindor on the infield. The Mets could also explore a full-time DH like Jose Abreu or J.D. Martinez, with Abreu being an intriguing play on a short-term deal since he can still play some first base as well. Adding more depth in the outfield would also help as Joc Pederson and Adam Duvall offer power potential that the Mets could really use.

What external pitchers could the Mets pursue?

The dream is Shohei Ohtani but it seems unlikely the Mets want to mortgage the farm for a player they could sign on the open market in a year. Justin Verlander could be worth a look if the Mets lose deGrom while Carlos Rodon is an intriguing mid-rotation target. Nathan Eovaldi would also fit the bill while the Mets could call up the Milwaukee Brewers to see what it would take to acquire Brandon Woodruff, who is just two years away from free agency and could be getting too expensive for Milwaukee to keep.

How much money will the Mets spend?

This is the million-dollar question because all of these avenues are dependent on how high a payroll Cohen will allow. Eppler indicated at his press conference that Cohen has promised financial support for whatever they want to do but Cohen has also indicated his belief that you should be able to build a pretty good team for $300 million. The Mets stayed beneath the highest luxury-tax threshold in 2022 and will likely exceed it this season but the difference between a $310 million payroll and a $340 million payroll is huge in terms of the holes the Mets have to fill. Expect the team to proceed with a general target of $325 million with the ability to go higher if a unique opportunity presents itself.