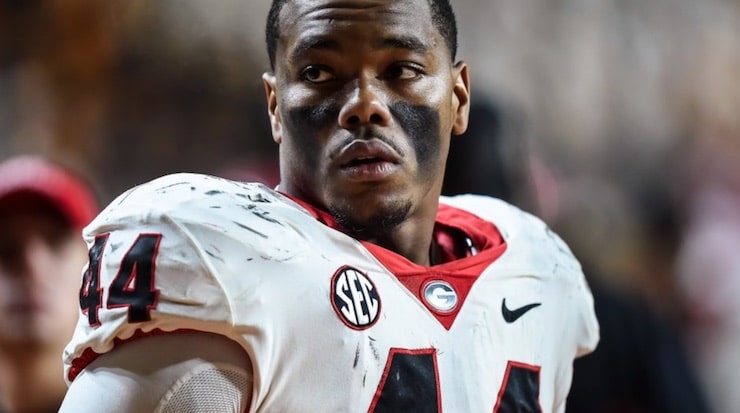 What an absolutely crazy night. So many trades. So many players falling. It’s hard to believe in some cases (Nakobe Dean, LB), while others (George Pickens, WR, coming off an ACL injury) are more understandable. We break down the five NFL teams to win the first round of the draft and the three teams that most deserve to be raked over the coals.

The Best Sportsbooks for Betting on NFL Draft 2022

Below, we’ll break down the winners from Round 1 of the 2022 NFL Draft.

The Jets go for three, trying to make the 2022 draft one for the history books.

The Jets added three players in the first round and still have an early pick in the second (no. 38). The players they added, Ahmad ‘Sauce’ Gardner (4), Garrett Wilson (10), and Jermaine Johnson (26), are all difference makers. Gardner is a playmaking corner that has great fundamentals and is yet to give up a touchdown in a football game. Wilson is a big WR with a big catch radius and good speed, possessing the type of vision after the catch to make special plays. Johnson, the last of the three, is an edge player with the upside of TJ Watt. He has great arms and a good feel for the field, keeping him in most plays. He likely slid due to his tendency to hesitate on the occasional play and that he is still a bit raw.

Though none of these three are the perfect player, nobody is, and wow did this team get a whole lot better. The only hole they have left is OLB. By the looks of it, they could pick from the lot at 38, using the later rounds to add depth across their roster. With such a deep draft class in the front 7 and RB, this is good news for the Jets. Alternatively, we could even see them rely on this depth at LB and add a tremendous talent in Travis Jones at DT, making their defensive line VERY SCARY.

It’s almost boring to say at this point: the Ravens always seem to win the draft. Though they already had two safeties, the Ravens were thrilled to find Kyle Hamilton sitting there at 14. Hamilton is a truly complete safety, a description very few NFL safeties can claim. The Ravens also traded up into the first round, utilizing Hollywood Brown’s trade request to acquire a pick well above his worth. Not only was that trade in itself a winning move, but with it they added Tyler Linderbaum (25), the best center in this draft and someone who can anchor their offensive line for the next decade+. Following the same formula as always, they didn’t turn down the opportunity at tremendous talent.

The Hamilton pick is interesting, perhaps suggesting that Chuck Clark will move into the box or the Ravens were planning on trading someone in the event that they were able to land Hamilton. The Linderbaum pick was a great move, allowing them to move Mekari to guard and thereby complete their offensive line. The Ravens now have a second, third and (6) fourth round picks with which to trade up, down, and all around as they try to beef up their front 7, perhaps add a slot corner, and try to land a steal at WR.

How ’bout them Chiefs? Making a big splash on defense on Day 1.

The Chiefs went double defense here, taking significant pressure off of their offense as they compete in the most explosive division in football. They jumped the Bills, trading up to 21 to take Trent McDuffie. McDuffie, a corner, played a lot of zone in college but looks to have the tools of versatility that the Chiefs love and is a great talent and upgrade at the position. They also stayed patient at 30, letting one of the top edge players in George Karlaftis fall to them. Karlaftis has good power and a comparatively complete arsenal of moves for a rookie, making him a true steal at 30.

Picking Karlaftis makes the McDuffie choice all the more wonderful. Karlaftis joining the squad allows the Chiefs to move Clark or Jones inside, and sheesh, that’s scary to think about. Now with McDuffie to help out the back end, which he will probably only need to do for about two seconds per play, this defense can be one of the best in the league. We could still see them go with a very talented WR early in the draft, as they have picks 50 and 62. They absolutely nailed this.

Don’t let the fans burn the city down. The Eagles got it done here in 2022.

The Eagles ended up just drafting one player in the first round, down from the three picks they held just a short time ago. However, with that pick (13) they got Jordan Davis, a phenomenal two-down DT that adds some youth and much needed depth to their DL. They also traded a pick to the Titans in a slim package for AJ Brown, extending him shortly thereafter and avoiding the possible continuation of historical woes when drafting WRs.

Both of these were great moves. As was mentioned above, Davis fills a hole in that defense (and maybe even two or three holes, he’s so big). Of course, we all know what AJ Brown can do, and now this offense is complete. With the Eagles still sitting at 51 and beyond, they could be looking to add a finishing touch to their defense by trading up for Nakobe Dean. Alternatively, they could be patient and take best talent available, making next year the year they chase a super bowl.

The Jags addressed offense in free agency and used the draft to build out their defense.

The Jags decided to pick twice here, trading back up into the first round as one of their favorite players fell (Devin Lloyd). With that being said, their current draft picks are Travon Walker (1), a versatile DL, and Lloyd (27) , the most talented and complete LB in this draft class. Though Walker is versatile and his block shed is incredible, he is extremely underdeveloped as a pass rusher and so a bit of moon shot. Lloyd is on the other end of the spectrum, being a more complete linebacker than most that are currently in the NFL.

I’m not a fan of taking a risk with the first overall pick, but the upside with Walker is undoubtedly there. With such great block shed, if he can learn to build some pass rush moves off of it he will be elite. As you may guess, the Lloyd pick was a lot safer and likely the STEAL OF THE DRAFT. Read that again. The Jaguars got a beast here in Lloyd. They also have two early third round picks, giving them the opportunity to add some high-level talent.

Next, we’ll break down some of the teams that had less-than-stellar grades on draft day.

Let’s go over some of the NFL Draft losers from the first round.

Rodgers was packin’ them down last night, and for good reason. Another Packers draft class that has us scratching our heads.

The Packers went with two defenders here, linebacker Quay Walker (22) and defensive tackle Devonte Wyatt (28). Walker has good speed and is good against the run, although he has a poor feel for coverage. Wyatt is a monster, the best three down DT in this draft. He can leave the occasional play on the field, but he hits all of the skill boxes.

Packers Draft Analysis and Next Moves

Sure, adding talent to a sound defense is fun, but not when your QB is throwing the ball to a WR2 and two guys who will at best be mediocre contributors (Watkins, Cobb). Many around the NFL expected them to go with George Pickens here, an extremely talented WR with good size that is coming off of an ACL injury. Sure, he is still on the board, and guys like John Metchie are a perfect fit for them, but they should’ve locked Pickens down. They could use two WRs in this draft. They could be aggressive on Day 2, utilizing picks 53 and 59, or picks acquired with them, to grab two talented WRs, but based on recent history, I wouldn’t count on it.

The Saints were overeager, drafting overeager guys earlier than they needed to.

The Saints traded up to take wide receiver Chris Olave at 11 while they sat patient to take Trevor Penning (T) at 19. Olave is a talented WR, who has good hands, good speed, and decent routes. Penning is a tackle that likes to play nasty, though he has a stiff upper body and loses power on the unengaged move.

Saints Draft Analysis and Next Moves

It is unclear as to why the Saints traded up for Olave when Jameson Williams and Jahan Dotson were still on the board. Williams may have been the best WR in this draft, and Dotson the most polished. Speed is important, but other guys have it too. It is also unclear as to what drew the Saints toward Trevor Penning over Bernhard Raimann. Sure, Raimann has drawbacks similar to Penning, but Raimann is the more sound player, as the eagerness of Penning can exacerbate issues. To be fair and clear, neither of these picks are misses. However, better options were available, including not trading away draft capital to move up for a WR.

The Bengals didn’t need to make this pick, but I guess they got caught up in all of the excitement that surrounded the end of the first round.

The Bengals just had one pick (31), with which they took Daxton Hill (S/CB). Hill moves a bit differently than most, and that isn’t a good thing. His leg muscles are out of whack and that affects his hips and general movement.

Bengals Draft Analysis and Next Moves

If the Bengals didn’t like anyone here then they should have traded out, but they should not have taken Hill. Just a bad pick, and bad enough to land them on this list.

If you are looking for NFL Draft live coverage, here is the info for Day 2.