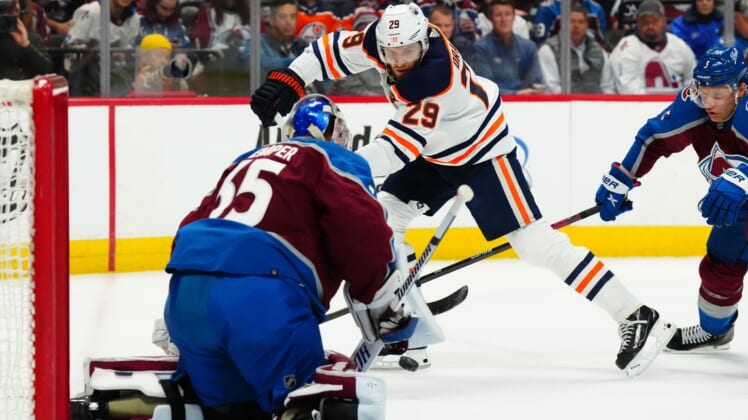 Another unhinged game 1 performance by the Oilers that resulted in a loss has the team trailing a series 1-0 once again. Clearly, as the series progresses there will be adjustments, momentum swings, and lucky breaks going forward, as game 1 provided another nice example that the Oilers are resilient.

Sure, score effects likely played a factor in the Oilers finding their way back into the game, but it is worth noting that we’ve seen the entire group make adjustments, or at the very least regain their composure, after the rocky starts that seem to be a feature of the team. More specifically these adjustments seem to be a strength of Coach Woodcroft.

Last year in the 2nd we saw the Avs live up to their name, pouring on the offence in their game 1 drubbing of the Golden Knights, only for the Knights to flip the script and take over the series. The Knights used a bully-ball style, using their physicality and the relative lawlessness of the playoffs to their advantage. Surely the Oilers will have to cool the Avs offence in a different manner, but we’ve seen enough from the Oilers to know that they have a shot.

There was some talk of whether Smith would get the start in net after another unflattering game 1 performance, more so than after game 1 in Calgary, yet we should not be surprised to see that he will be in net tonight. Even to get to Smith’s incredible performance in April the organization had to display a great deal of faith and patience in their starter through injuries and a sub par March. That said, it is encouraging to see Koskinen put in a respectable performance, and to know Skinner is as capable a 3rd as exists across the league.

At the other end it seems as though Darcy Kuemper will be out tonight, and possibly going forward, with an undisclosed injury. Francouz is a capable backup, in fact, the greatest hurdle between him and a starter’s role is his durability. As long as he’s healthy he should be able to give the Avs a chance, although the Avs have had to deal with attrition, famously having to start Curtis McElhinny in their 2020 playoff loss to the Stars.

The main focus for both teams, regardless of which goalies start, will be tightening up the defensive effort, the Oilers in particular were burned by poor transition defence against the explosive attacks of Makar and MacKinnon, and even worse coverage at their net front. Between the 2 teams there is an immense amount of talent, so much that the notions of traditional low scoring playoff hockey are being challenged, even redefined. It might be a defensive accomplishment for either of these teams to concede less than 5, but conventional wisdom would be to see tighter games going forward.

Personally, with McDavid and Draisaitl on the same lines I’m a bigger fan of Kane in this spot than Hyman, though either fits nicely. Hyman shows a lot of chemistry and synergy with Nugent-Hopkins.

Draisaitl is flying, and though his ankle injury is likely still a factor he looks to be close to his regular self. Perhaps we will see him switch back to 2C at some point soon, should the Oilers feel a deeper lineup might help mirror and combat the Avs forward group.

McLeod continues to impress with a well rounded game, as he’s able to use his skating skills to be effective everywhere in the ice, attacking off the rush, forechecking, back checking. As the fastest member of the Oilers bottom 6 a lot will be asked of him, considering the depth of the Avs speed.

Kassian and Archibald haven’t been playing much at all, and a growing number of fans are hoping to see young Dylan Holloway get his first glimpse of NHL action in their place. I am a believer in Holloway’s game, when he was drafted 2 years ago there was a belief that his game was pro-style already, and we’ve seen nothing but reaffirmations of that in his brief time with AHL Bakersfield. He has the size and speed to hold his own, and could be a spark if he gets a shot in the lineup at some point.

Nurse will not be getting many favourable comparisons against Makar, a conversation initiated by their big money contract extensions, and he isn’t exactly playing the best hockey of his career. That said he is a hugely important piece to the team as he is still the Oilers best defenceman. It should be noted that as good as Ceci has been he is not Devon Toews, Makar’s partner, for those insisting on evaluating Nurse against Makar.

In general the blueline has been a positive in the postseason, Kulak fitting in nicely has really stabilized Barrie as well as the rest of the group. Barrie has been at his best, even leading the blueline in icetime in game 1, which is needed given his cap hit.

Keith has been under scrutiny, both deserved and expected as this is where his game is at this point of his career, but to his credit he and Bouchard have been effective. They are prone to big plays at both ends of the ice, although Bouchard is starting to post better underlying numbers, they’ve done so together. Especially when it comes to zone entry denials and similar microstats where Bouchard is posting stronger numbers it is worth noting that opponents are likely choosing to attack Keith side of the blueline which may be prolong up some of these numbers.

Outside of starting Francouz for the injured Kuemper, the Avs don’t appear to be making any lineup changes for game 2.

Much of the talk surrounds McDavid vs MacKinnon, but Makar is the Avs best player. Not to slight MacKinnon, hands down one of the league’s best, but I’d say Draisaitl is better at this point of their careers. In fact, Makar might have the best case to challenge McDavid for top player, and the playoff MVP trophy (which should be renamed) is likely a conversation between McDavid, Makar, Vasilevskiy, and Shesterkin.

Elsewhere, Landeskog, Rantanen, Kadri, and Nichushkin are all strong top-line calibre players. Lehkonen is a smart defensive winger who compliments the group well.

The further one looks down the lineup the more speed there is. Newhook has some skill and could still develop into a top level forward, but undeniably his main attribute is his speed. Burakovsky has a nice shot, but mostly he’s just really fast. Helm, Cogliano, O’Connor, the Avs will use their depth and speed to consistently wear down and overwhelm their opponents, wreaking havoc in transition offence and defence.

Toews plays a quieter game than his superstar partner, but has been a top 4 defender in his own right going back as far as his days as a New York Islander. He was as much in the conversation for a best-on-best team Canada as Nurse was, in part thanks to his playing with Makar, but regardless he most certainly is part of Makar’s on-ice brilliance.

Byram has had a tough stretch of health the past few seasons, but it is wonderful to see his ability. The league is a better place with talent of his level.

Annunen has some pedigree as a high level goalie prospect, and is roughly the same age as Skinner. That said he does not have the experience at the NHL level that Skinner does, not to mention the stellar AHL results. Of the 2 I would have a bit more faith in Skinner at this moment, but at least he is an interesting option the Avs don’t want to have to use.