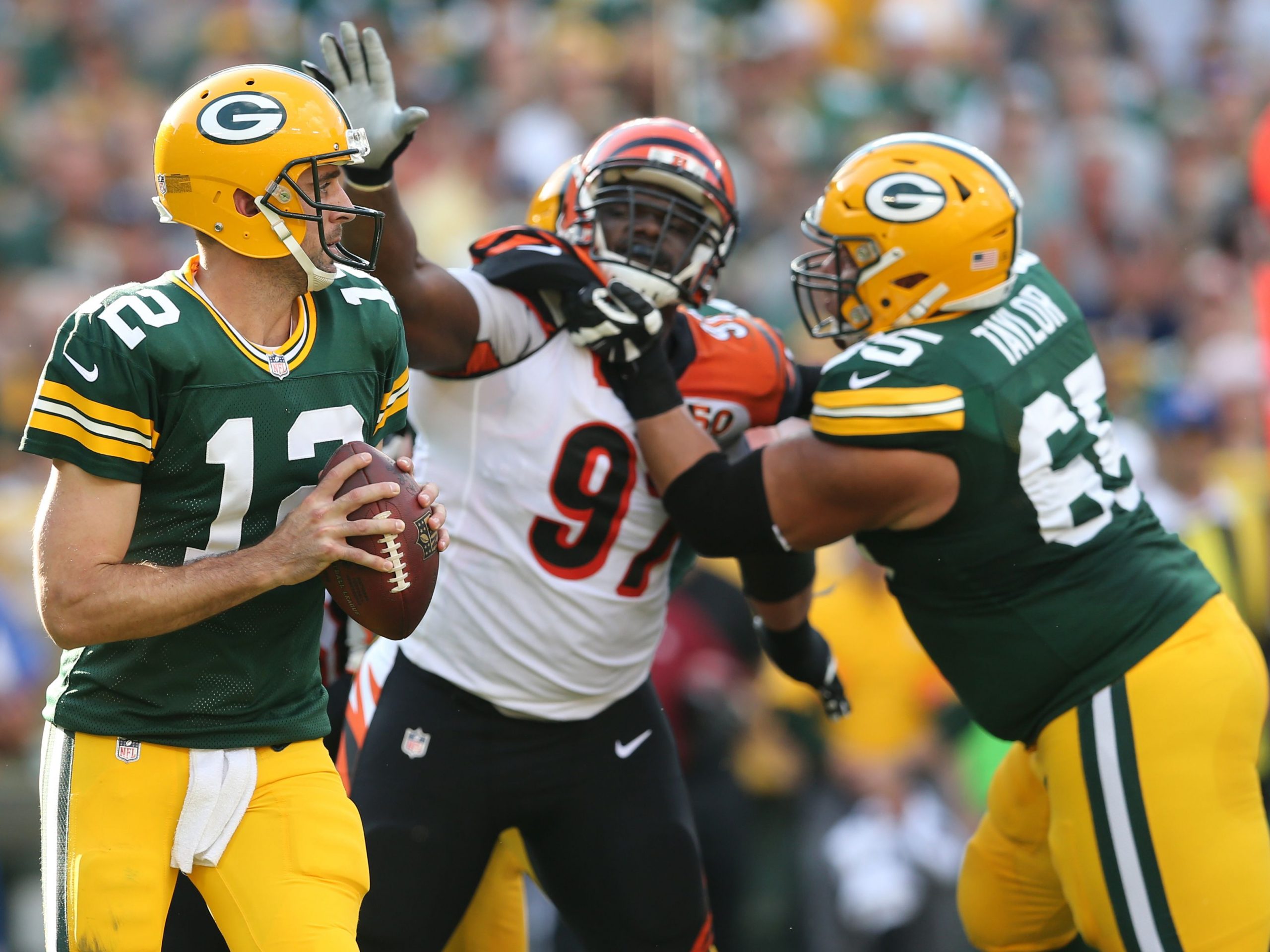 The Green Bay Packers head to Cincinnati for a Week 5 showdown with the improved Bengals. The Packers enter the game with a 3-1 record and are in first place in the NFC North after last week’s 27-17 victory over the Steelers. The Bengals are 3-1 also after edging the Jacksonville Jaguars 24-21 and are now tied for first place in the AFC North with the Browns and Ravens.

The Packers trail the all-time series, having won six games while losing seven. The teams first met in 1971. The Packers won the last meeting between the two teams in 2017, winning 27-24. Green Bay has lost the last two games they played in Cincinnati and have not beaten the Bengals on the road since 1998 when they won 13-6.

Here is a look at six key factors that will determine who wins Sunday’s game in Cincinnati:

The Bengals offensive line has been a pleasant surprise this season, but they have still allowed 11 sacks through four games. The Packers need to put pressure on second-year quarterback Joe Burrow who appears to have taken a step forward in his second year in the league.

Cincinnati’s offensive line is dealing with injury issues. Starting center Trey Hopkins missed practice midweek due to a knee injury as did guard Xavier Su’a-Filo. The Bengals depth would be sorely tested if either of these players are unable to play.

Preston Smith and Rashan Gary have been the Packers primary pass rushers with Kenny Clark and Kingsley Keke also adding pressure from the defensive line.

Defensive coordinator Joe Barry has mixed up his pass rush packages and the team has gotten some more pressure on opposing quarterbacks in recent weeks.

Burrow has thrown four interceptions in four games and if the Packers can get pressure on him, they can reduce his effectiveness and force him into mistakes.

The Packers need for a pass rush is even more pronounced with Jaire Alexander unlikely to play Sunday and Kevin King still officially in concussion protocol as of Thursday.

Burrow’s favorite receiver this season has been rookie Ja’Marr Chase. The former LSU star is averaging 17.5-yards per catch and has scored four touchdowns in his first four NFL games.

Chase has good size and hands and can out-physical smaller defensive backs. King has good size but is often beaten deep when he plays on the boundary. If King plays, the Packers may ask him to stay with Chase who has good but not great speed but is tall and physical. If not, rookie Eric Stokes may be asked to cover Chase on the perimeter.

The Bengals may move Chase into the slot on some plays which may match him up with Chandon Sullivan or even Isaac Yiadom. Those would be mismatches in the Bengals favor.

The Packers banged up secondary will have a challenge when trying to stop Chase.

The Packers offense works best when they run the football enough to keep opposing defenses honest and maintain possession of the ball.

The Packers have two strong running backs with contrasting styles. Aaron Jones is a speedy runner who is a threat to take any run to the house while A.J. Dillon is a strong, between-the-tackles runner who is a load to try to tackle one-on-one.

The Packers don’t need to gain a lot of yards on the ground, but they need to keep the Cincinnati defense honest and prevent them from teeing off on rushing the passer and to keep the play action passing game effective.

The Cincinnati rushing defense has been strong this season and is giving up an average of just 93.5-yards per game.

Defensive tackle Larry Ogunjobi has been limited in practice due to a knee injury. He is a solid run defender who the Bengals need to help clog up the middle of their defensive line.

The status of Elgton Jenkins remains unknown for Sunday’s game. Jenkins missed the last two games with an ankle injury. He returned to practice on a limited basis on Thursday. The Packers offensive line will get a big boost if Jenkins is able to play.

If not, Yosh Nijman will get his third straight start at left tackle. Nijman has done a steady job in his first two starts although he does need help from running backs, tight ends and receivers. The Packers offense also adjusts when Jenkins isn’t in the lineup by throwing more short passes with quick releases.

Whoever starts at left tackle will have their hands full with defensive end Trey Hendrickson who is second on the Bengals with 2.5 sacks.

Defensive tackle B.J. Hill leads the team with three sacks through four games and rookie right guard Royce Newman will have the challenge of containing Hill.

When Rodgers has time to throw, he can beat any defense so this becomes a key for the Green Bay offense.

Joe Mixon is the primary back for the Bengals and he has 83 of the team’s 102 rushing attempts through four games.

Mixon has missed practice early in the week with an injured ankle and his status for Sunday’s game remains up in the air.

With the injuries to the Cincinnati offensive line, Kenny Clark should be a dominant player against Cincinnati and the Packers should be able to limit backup Samaje Perine’s productivity.

If the Cincinnati offense cannot consistently run the ball, the Packers pass rush should be better and the offense would be one-dimensional.

Special teams continue to be a problem for the Packers. Although punter Corey Bojorquez has been a step up and Mason Crosby is clutch and dependable, the rest of the special teams have been a concern.

The Packers nearly had a field goal blocked against San Francisco and did have one blocked against the Steelers but it was called back on a controversial offsides call. On both plays, the right side of the Green Bay protection was overwhelmed by the two outside rushers.

The Packers own return units, with Kylin Hill on kickoffs and Amari Rodgers on punt returns, have been inconsistent at best and need to improve as well.

The Bengals are 3-1 but their schedule has been easy thus far and we still don’t know exactly how good this team is. One thing we do know is that they are improved over last season and are heading in the right direction.

The injury to Alexander could really hurt the Packers who are suddenly thin at cornerback and may be forced to rely on a rookie first-round pick and the inconsistent Kevin King if King is cleared to play.

The Packers pass rush and pass protection will be the keys to this game.

Green Bay has struggled in Cincinnati in recent visits, but they are the deeper team and they will find a way to win what should be an offensive shootout.