For Flyers’ Simmonds, the more things change, the more he stays the same 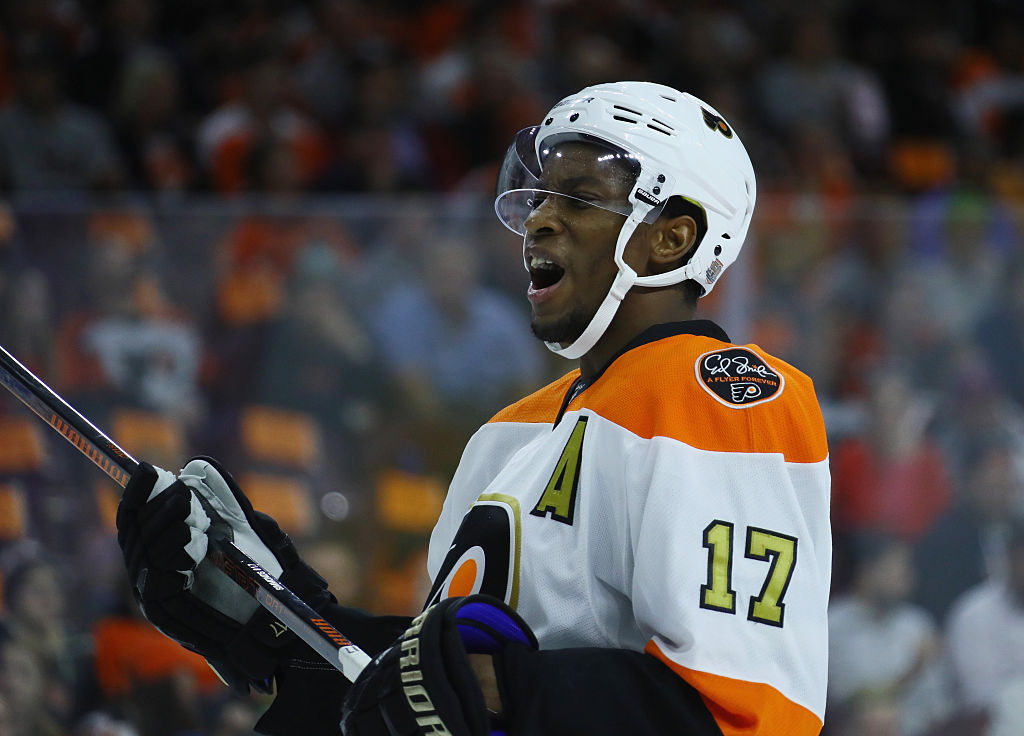 For Flyers’ Simmonds, the more things change, the more he stays the same

Wayne Simmonds is arguably the toughest player on the Philadelphia Flyers, a player so feared that videos exist of his opponents telling their teammates that they “cannot fight Wayne Simmonds”.

But when his boss calls him into his office, Wayne Simmonds loses all of his trademark aggression and does what he is told. So when general manager Ron Hextall told Simmonds that he should begin wearing a visor on the ice in order to prevent injury, Simmonds listened.

Some players find a routine that works and are hesitant to change even something as minuscule as a visor, but if Simmonds’ first 10 games of this season are any indication, the “Wayne Train” will keep on chugging along, even if it has a new front grill.

Entering the 2016-17 campaign coming off of a 32-goal, 60-point season fueled by a hot start, Simmonds has had his best beginning to a season yet so far this year. He leads the NHL with 6 goals, including an NHL-best 4 power play goals, and is second in the league with 11 points. Simmonds has even done an admirable job at staying out of the penalty box; he has yet to pick up a major penalty in any game.

While Simmonds is as dependable as ever, even if things have changed around him. His only teammates left from his first year in Philadelphia are Claude Giroux, Jake Voracek, Sean Couturier, Brayden Schenn, Matt Read, and Brandon Manning. Simmonds is now an alternate captain, a top-line power forward, and a fan favorite.

But at the same time, Simmonds is the same old player despite all that’s changed. While some players get swellheaded as they rise through the rankings, Simmonds is the same humble presence. He is easily the most clutch Flyer, always there when the team most needs a goal, a defensive block, or even a fight. This season, Simmonds has received limited time on the penalty kill, a throwback to his early days in the NHL.

“I thought I knew how good a player Simmer was, and I got an education last year on just how valuable he is as a player and a leader and a person,” said head coach Dave Hakstol during training camp. “He’s a complete package.”

Yet has anyone outside of Philadelphia really noticed all of Simmonds’ accomplishments? Simmonds’ remarkable consistency and clutch factor have endeared him to local fans, but it seems as if the national media is barely beginning to see just how talented the man his teammates call “Simmer” really is. Simmonds has yet to be nominated for an NHL All-Star Game despite his penchant as a top goal scorer, something that seems likely to change this year.

Simmonds may be one of the most unassuming players in the National Hockey League during interviews, but the chance at making his first All-Star team in the city that traded him away (Los Angeles) would have to make Simmonds smile.

During training camp, Simmonds told Sam Carchidi of The Philadelphia Inquirer: “I’ve flown under the radar my whole life. I’m just here to help my team in any way I can, and all the individual stuff gets pushed to the side.”

The future is now for the Flyers. Young prospects Travis Konecny and Ivan Provorov have made their presence felt on the team, more young guns are on the way, and the team has begun the process of supplementing its core with veteran free agents necessary to escape the “rebuilding” stage.

However, Wayne Simmonds’ goal always remains the same: he simply will not rest until he and his teammates are hoisting the Stanley Cup. They say that the only constant thing in the world is change, but Flyers fans can attest that Wayne Simmonds is as close to a constant as you’ll ever get.