Wild Finish Off Road Trip With 3-2 Win Over Toronto 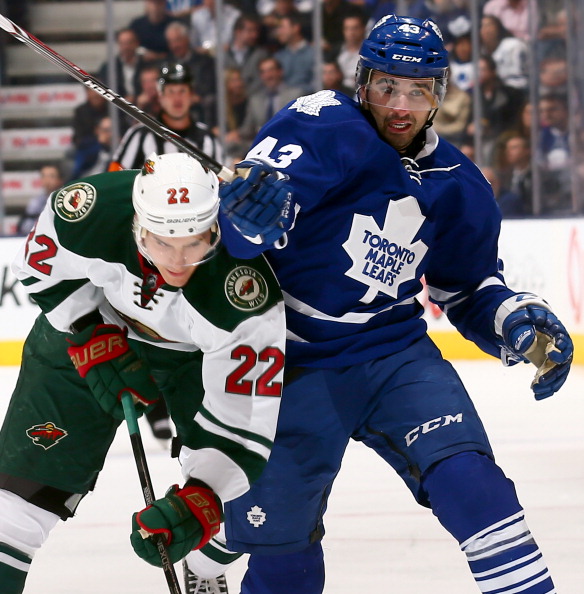 So from the star afterglow of Connor McDavid in Edmonton, the Wild travel to Toronto who have plenty of young star power of their own led by wunderkinds Auston Mathews, Mitch Marner and William Nylander.  Like the Oilers, the kids are carrying the mail and the downtrodden market has lots to cheer for and some early success (not so much recently) to go with it.  To put it into food terms, clubs like the Maple Leafs are like freshly baked chocolate chip cookies while the Wild are like leftover macaroni-n-cheese which was once good but now is bland and you’re not looking forward to eating it.

So will fans care to stick with that macaroni-n-cheese by just adding some salt and pepper try to make the best of its semi-crunchy grossness out of sheer convenience or will they be tempted to suggest the team trash it and start over?  The game is the final one of this Canadian road swing which has seen the Wild mostly squander opportunities thus far despite having a few days in between each game.  Toronto has normally been a tough place for the Wild to play, but can Minnesota end its 4-game road trip on a high note?

1st Period Thoughts: Wow. Within the first 30 seconds, the Wild would cause several turnovers right in front of their own net.  I have begun to question whether this team understands the basics of hockey, such as clearing the zone.   Tyler Bozak found himself all alone but he couldn’t gather the puck to pull the trigger even though he had Devan Dubnyk way out of his crease.  It was obvious Toronto’s speed was something the Wild had to get used to as during some of the faceoffs you could see Minnesota players huffing and puffing from chasing the young Maple Leafs around the ice.  Minnesota would eventually find a way to match the speed and it was the Mikko Koivu–Mikael Granlund–Jason Zucker line that would get the Wild on the scoreboard.  Koivu would work the puck deep and it was Granlund  and Koivu charging into the zone to dig the puck out and he was able to send a pass into the slot that was pounced on by Zucker who beat Frederik Andersen to make it 1-0 Wild.  It was a big goal that boosted the energy of the Wild and pretty soon they were able to win small races for pucks.  Granlund had another awesome chance of his own as he intercepted a pass near the Wild blueline and chipped a pass to himself to get around a defender and then turned on the jets to put the Leafs on their heels where he then made a toe drag move and tried to pick a corner but missed wide.  It was the kind of initiative that you had wanted to see from Granlund for so long.  A few minutes later Jared Spurgeon found Chris Stewart with a long pass that sent the power forward on a breakaway and he beat Andersen 5-hole to give the Wild a 2-0 lead.  It was at this point the Wild seemed to relax their posture with a bad power play effort and this allowed the Maple Leafs to start to create some scoring chances.  It started with a few shots from the perimeter and then soon turned to Toronto trying to crash the net looking for a rebound.  Toronto would cut the lead in half in that manner as Nazem Kadri sent a wrist shot on goal that drew an inexplicably big rebound from Dubnyk that went out to Ben Smith for an easy rebound tally.  2-1.  It was a horrible rebound kicked right out into the slot.  Minnesota would tighten up a bit in the last few minutes in order to take their 1-goal lead into the 1st intermission.  The Wild were outshot 10-8 in the period.

2nd Period Thoughts:  Minnesota would take a page out of the Maple Leafs playbook and attack early with a an aggressive forecheck and they were able to get a goal just over a minute into the period.  It was Charlie Coyle sending a pass out front to Eric Staal who beat Andersen with a quick backhander making it 3-1 Wild.  The Wild’s 4th line nearly followed Staal’s goal with one of their own as Chris Stewart tracked down a puck and then put his shoulder down and drove to the net but Andersen was able to cover it up.  The Maple Leafs were getting a little ornery and Roman Polak would hit Stewart that drew the ire of Kurtis Gabriel who challenged the Toronto defenseman.  Polak is a well-built player but Gabriel kept him close and then started landing some vicious jabs that sent the veteran to the ice.  A clear win for Gabriel, but the fight seemed to stir up the Leafs more than it did anything for the Wild.  Unfortunately the Wild would again rest on its two-goal lead and the mistakes with the puck in their own end would start to pile up.  Jonas Brodin had the puck stolen from him by Tyler Bozak and the former Denver Pioneers’ star would dangle around Mathew Dumba who put up a feeble effort before beating Dubnyk with a wicked backhander that went top shelft cutting the Wild lead back to one, 3-2.  It was a momentum shifting goal and Bruce Boudreau gave a long angry stare at his blueliner who were undressed so completely by Bozak.  The Wild then spent the rest of the period hanging on to their 1-goal lead.  Scrambling defense, and a penalty kill threatened to give Toronto the game-tying goal but Dubnyk was sharp.  On the other end, Andersen shut the door on Wild fowards as he denied Koivu on a close-range opportunity.  Turnovers and the fact Minnesota was not moving its feet was resulting in some golden opportunities for Toronto and the Wild better pick it up if they hope to win this game.

3rd Period Thoughts:  The 3rd period started out a bit strange as Roman Polak cleared a puck that appeared to hit NHL linesman Steve Miller in the leg that sent the official to the ice writhing in pain.  Both the Wild and the Maple Leafs training staff attended to Miller who kept wriggling on the ice from the hit as both benches sort of looked on.  As Miller was helped off the ice to stick taps and mild ovation from the Toronto crowd, Wild winger Chris Stewart chirped at Polak for his role in the injury.  This meant the game would be played with just 3 officials.  The Wild mostly played rope-a-dope in the 3rd period, working the puck deep, changing and keeping their shifts short.  It wasn’t overly entertaining to watch but it did the job as it prevented the Maple Leafs from being able to create too many quality scoring chances.  It was all about little plays.  The extra poke at the puck to clear the zone or the willingness to step in front of a shot.  Toronto would pull Andersen with about 2 minutes left in the game and the Wild circled the wagons around their goal and Nate Prosser, Ryan Suter, Coyle and others paid the price down the stretch to block shots and Minnesota would skate away with a 3-2 victory.

Devan Dubnyk had a monster save in the closing moments as he stoned James van Reimsdyk from close range to go along with a 35 save performance to give the Wild a huge road win.  While I felt at times he was guessing a bit more; he still did a great job of absorbing shots and not giving up rebounds down the stretch.  Defensively the Wild were doing what they could to knock Maple Leafs forwards to the ice and Suter and Marco Scandella were really doing a great job of playing physical around the pain.  The penalty kill was again perfect (1-for-1) but Minnesota did a decent job of playing disciplined and not giving Toronto too many chances with man advantage.

Offensively the Wild did a nice job of creating offense off the forecheck, but I wasn’t really thrilled how they took their foot off the gas afterwards.  It was great to see Chris Stewart, Jason Zucker and Eric Staal to register goals this evening after going through the scoring droughts they’ve had.  Mikael Granlund also impressed with his ability to dangle and elude defenses, but his assertiveness seems to be increasing with each game.  The team managed to put enough pucks in the back of the net to win, but I was hoping

I realize it was a long road trip, but the pace was hardly oppressive to the Wild.  Minnesota had at least 2 full days to rest up prior to tonight’s game so it should not have been too fatigued.  Now it returns home to play against what will likely be a very motivated Oilers squad who will want to avenge a loss to the Wild from Sunday.  Earning 6 out a possible 10 points on the road trip gives the team some good momentum going into what will be a tough weekend.

Teemu Pulkkinen was honored for being ‘Player of the Month’ for his strong November for the Wild, but good feelings were elusive for Iowa in this mid-week matchup against regional rival Milwaukee.  The Admirals would strike first as Adam Payerl blasted a shot that beat Alex Stalock to make it 1-0 Milwaukee just 28 seconds into the game.  Stalock, who has also had a resurgent month of his own locked things down and kept the Admirals from adding to their lead for most of the next two periods.  Iowa would score late in the 2nd period as Sam Anas made a nice saucer pass to Adam Gilmour who backhanded it by Juuse Saros tying the game at one.  That would be as close as the Wild got as Milwaukee scored twice in the 3rd on tap in goals from Harry Zolnierczyk and Matt White.  Stalock had 31 saves in the loss.

LW – Kirill Kaprizov (Salavat Yulaev Ufa, KHL) ~ the skilled Russian continues to impress as he scored the lone goal in Salavat Yulaev’s 2-1 shootout loss to Jokerit on December 4th.  Kaprizov has 14 goals, 28 points (a new career high), 62 PIM’s and is a +8 in 36 games.

Let’s Play Hockey kicked out their High School Hockey rankings for the week.  Here are the Top 10 for both Class A & AA for both Boys and Girls as of December 7th, 2016.  Check it out! 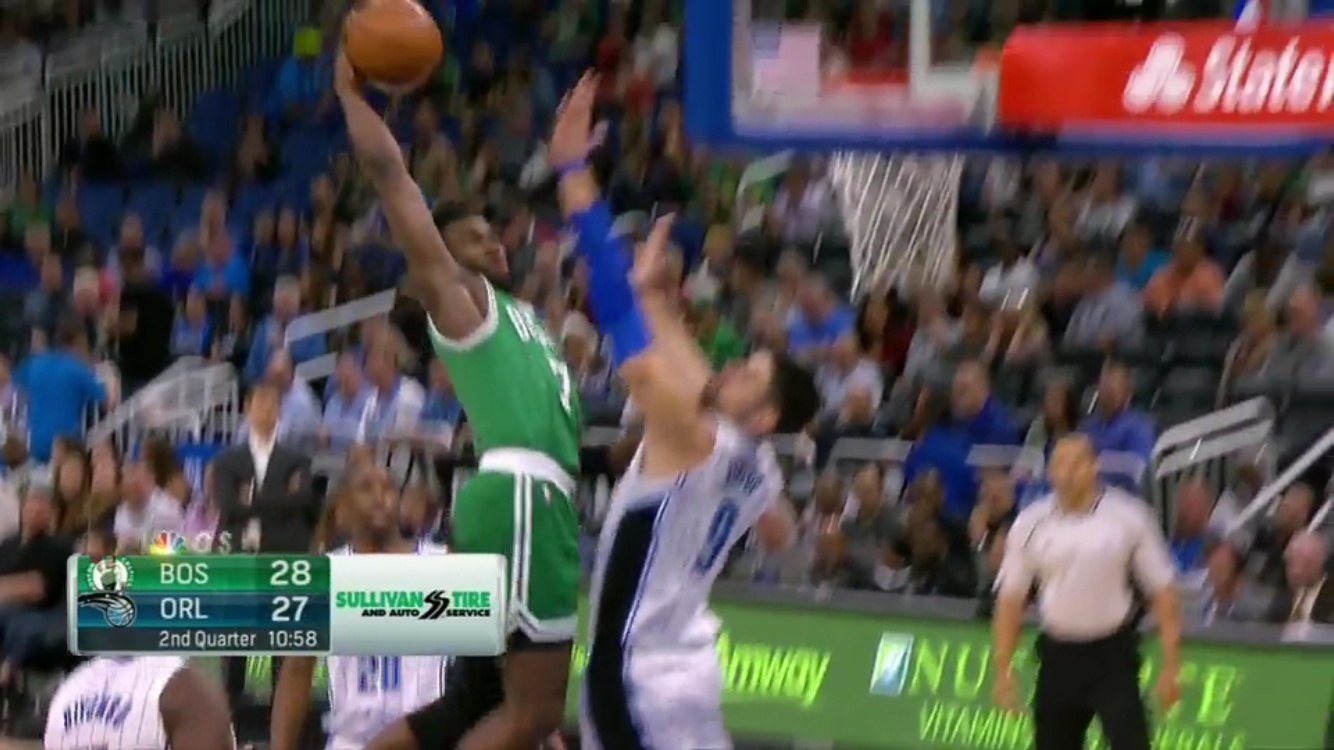 The Orlando Magic have been viewed among the NBA’s more hapless teams of late, what with their four-years-and-counting rebuild and baffling front-office moves. (Tobias Harris...