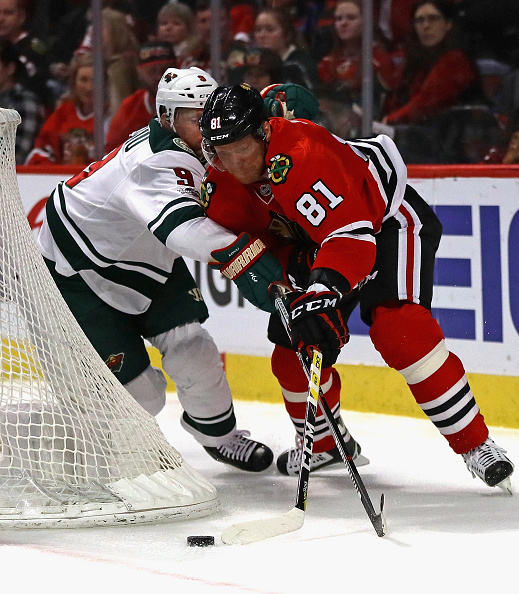 The last time the Minnesota Wild played the Chicago Blackhawks, the buzz was really about how Chicago was saying this was a big game.  That was notable because it was as though Chicago was finally recognizing Minnesota as a threat to their dominance.  The NHL had gone out of its way to ignore the success of Minnesota up until that game and despite the alleged dominance of Chicago (according to Jeremy Roenick to KFAN‘s Beyond the Pond on Saturday) they still needed overtime to beat the Wild.  Forget the fact the Wild were coming off a long road trip and had played the night before that game and Chicago had 4 days off prior to that contest, this is another big opportunity for both clubs.

So will a more rested and re-charged Wild club be able to settle the score against Chicago, or will the Blackhawks inch a little closer to Minnesota in the Central Division standings?  The Wild are about to go into their league-mandated 5-day break and most teams have found that to be detrimental to their play and their record.  Can the Wild go into the break with another big home win?

1st Period Thoughts:  The pace in the 1st period was absolutely incredible.  Back and forth with both clubs trading chances virtually all period on, yet defending well enough to deny most of the 2nd chance opportunities.  One line that was buzzing early was the Wild’s 4th line of Tyler Graovac, Chris Stewart and Jordan Schroeder who were just flying into the offensive zone and they were able to create scoring chances because of it.  Graovac was especially noticeable as the team set him up on a bunch occasions but each time Corey Crawford was there to shut the door.  The Blackhawks would try to answer back and they came dangerously close to taking the lead as Tanner Kero was denied by a sprawling leg pad save by Devan Dubnyk.  Minnesota had moments where its speed, quickness started to put Chicago on their heels but the Blackhawks did a decent job of forcing the Wild to settle for shots from the perimeter.  Crawford was dialed in, and shots from the perimeter were not going to cut it.  Even on shots from in close like a point-blank range bid by Erik Haula, Crawford dismissed it with confidence.  The Wild were really activating their defense, which flirted with a dangerous Chicago counter attack but Minnesota’s ability to recover worked out well enough that they never really got caught.  Jared Spurgeon had a terrific recovery as he skated down a threatening Ryan Hartman before he could pull the trigger.  The emotional level at the “X” is at playoff pitch already and the first goal will no doubt be huge.  Chicago out shot Minnesota 15-14.

2nd Period Thoughts:  The Blackhawks would break the stalemate just 58 seconds into the period as a shot from the point by Brian Campbell would be partially blocked by Dubnyk and the puck dropped right to the ice for Jonathan Toews to bang home.  Mathew Dumba just sort of stood there looking for the puck as Toews got position and gave his club the go-ahead goal.  Minnesota would answer back with a goal of its own a few minutes later on the power play.  The Wild came dangerously close to overpassing the puck as Mikael Granlund, Nino Niederreiter and Mikko Koivu dished the puck through the Blackhawks’ defense as Niederreiter skated down the slot for a chance and Crawford lost sight of the shot and Granlund was able to stuff it home.  1-1 game.  On the very next shift the Wild would fall asleep defensively as Marco Scandella was stripped from the puck by Toews who fed a pass from beneath the goal line to Richard Panik who hammered a shot by Dubnyk.  Again Dumba just sort of turned in place unable to track the puck or pick up his man leaving Panik all alone for the snipe.  2-1 Chicago.  The goal killed the sellout crowd and the Wild did little to respond to the Blackhawks 2nd goal.  Speed had been the Wild’s ally in the 1st period, but inexplicably the Wild kept finding ways to slow themselves down as they entered Chicago’s zone.  The pattern of mistakes was painful to watch; the Wild have a 3-on-2, the Minnesota forward turns back just after crossing the blueline and looks for a cross-ice trailer and then sends too soft of a pass that is easily intercepted.  The Blackhawks sensed blood and they started storming into the Minnesota zone and Dubnyk found himself under siege.  Fortunately for the Wild, Dubnyk bailed his club out with a number of quality saves to keep it a 1-goal game going into the 3rd.  It was a poor 2nd period effort from a team that looked like it was hoping to hit the beaches a bit early for its 5-day layoff.  Too soon for that, big points on the line and at least 20 minutes left to play.

3rd Period Thoughts:  In the 3rd period the Wild did not have a good start.  Chicago would extend its lead to two as Jonathan Toews ripped a shot right off the faceoff that Nick Schmaltz deflected by Dubnyk who just stood there frozen just 33 seconds into the period.  With Minnesota trailing 3-1 the Wild looked rather listless as it seemed to be deciding whether or not it wanted to really make a late-game rally or not.  Some players couldn’t seem to will their legs to move at all as I watched Eric Staal sort of stand and reach while Chicago operated in the Wild zone with impunity.  Not all Wild players were giving up and one of them wanting to lead the charge was alternate captain Zach Parise who seemed to be on a mission to lead a rally.   He wouldn’t be denied as Parise redirected a Scandella shot by Chicago.  3-2 now, but those hopes of a comeback would be quickly dashed as Schmaltz worked a puck down low getting the Wild’s defense standing and spinning in place like bubble hockey defenders as he fed a pass back to Toews for a quick shot that beat Dubnyk.  4-2 Chicago.   Haula would race into the offensive zone and send a pass that glanced off the stick of a diving Brent Seabrook and then was batted out of the air by Parise and in but the goal was immediately waived off as the officials felt there was a high stick.  The play was reviewed but it was obvious that Parise made contact a little above the cross bar and so it was no surprise when it was ruled ‘no goal.’  Minnesota kept plugging away and after another listless 5-6 minutes the Wild would luck out with a power play as Tanner Kero tripped up Eric Staal.  On the man advantage the Wild kept it simple and followed up a point shot and crashed the paint and it was Granlund stuffing home his 2nd goal of the game to make it 4-3 with just under 7 minutes left.  The Wild threw just about everything but the kitchen sink at the Blackhawks but just couldn’t get one by Crawford and even when the chance seemed there Minnesota couldn’t put it on net.  Toews would cap off an incredible game by salting it away with an empty net goal.  5-3 Chicago victory.

The Iowa Wild are on the verge of their best season yet and one that may include a spot in the American Hockey League playoffs as well.  Needless to say the team recognizes its important opportunity as the Cleveland Monsters, a team that they are battling against for that chance at the post-season comes to Des Moines.  On Sunday the Monsters won 2-0, so Iowa was looking to rebound with an improved effort on Monday.  Iowa would break the ice with a penalty shot goal by Grayson Downing.  Iowa would hold onto their lead thanks to some stellar goaltending by Alex Stalock who made a tremendous paddle save on Joe Pedenza from in close.  The Wild would add to their lead in the 2nd period as Zac Dalpe raced in off the rush and moved into the slot and beat the Monsters’ Brad Thiessen with wicked wrist shot to make it 2-0.  Cleveland would answer right back as Blake Siebenaler deflected a shot by Stalock to cut Iowa’s lead to one going into the 2nd intermission.  In the 3rd Iowa would extend their lead back to two, on a nice pass by Alex Tuch to Kurtis Gabriel who made a nice little dangle around Thiessen as he charged down the slot, 3-1 Wild.  The Monsters would make it interesting late in the game as former Iowa Wild forward Alex Petan would gather up a puck in the slot and rip a shot by Stalock making it 3-2.  Iowa would seal the deal with an empty net goal by Teemu Pulkkinen to earn a 4-2 win and move into 4th place in the AHL’s Central Division.  Stalock had 36 saves in the victory.

RW – Luke Kunin (Wisconsin, Big 10) ~ the Badgers earned a big sweep over Michigan this weekend and Kunin certainly played a role with 4 assists in the two games.  Kunin has 19 goals, 33 points, 26 PIM’s and is an ‘even’ rating in 27 games.

RW – Jordan Greenway (Boston U., H-East) ~ the power forward’s production has slowed down a bit as of late but he’s still finding ways onto the scoresheet as he had an assist as the Terriers swept New Hampshire with an 8-4 win on Saturday night.  Greenway has 8 goals, 27 points, 60 PIM’s and is a +13 in 30 games.

C – Dmitry Sokolov (Sudbury, OHL) ~ the Omsk, Russia-native tried to help his team rally back from a big deficit as he chipped in a goal (6 shots on goal) in the Wolves’ 5-4 loss to Niagara on Sunday.  Sokolov has 40 goals, 61 points, 6 PIM’s and is a -24 in 51 games.   He is the 2nd leading goal scorer in the Ontario Hockey League.

G – Ales Stezka (Chicago, USHL) ~ the Liberec, Czech Republic-native continues to be solid for the Steel as he made 28 saves in Chicago’s 3-2 win over Muskegon on Saturday.  Stezka has a 17-7-3 record, 2.28 goals against average and a .914% save percentage with 3 shutouts. 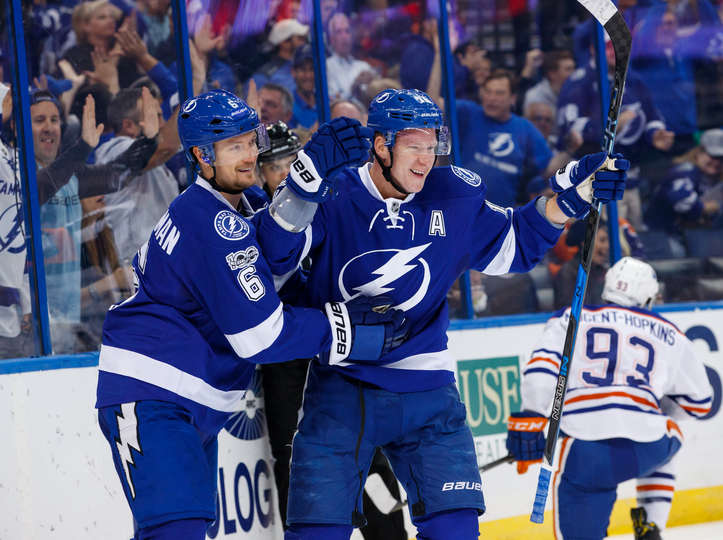 Game Recap: Triplets Combine For Eight Points To Lead The Way Over Oilers 4-1

Do we have a season after all? Nikita Kucherov had a goal and three assists, Ondrej Palat tallied two goals and Tyler Johnson had two...