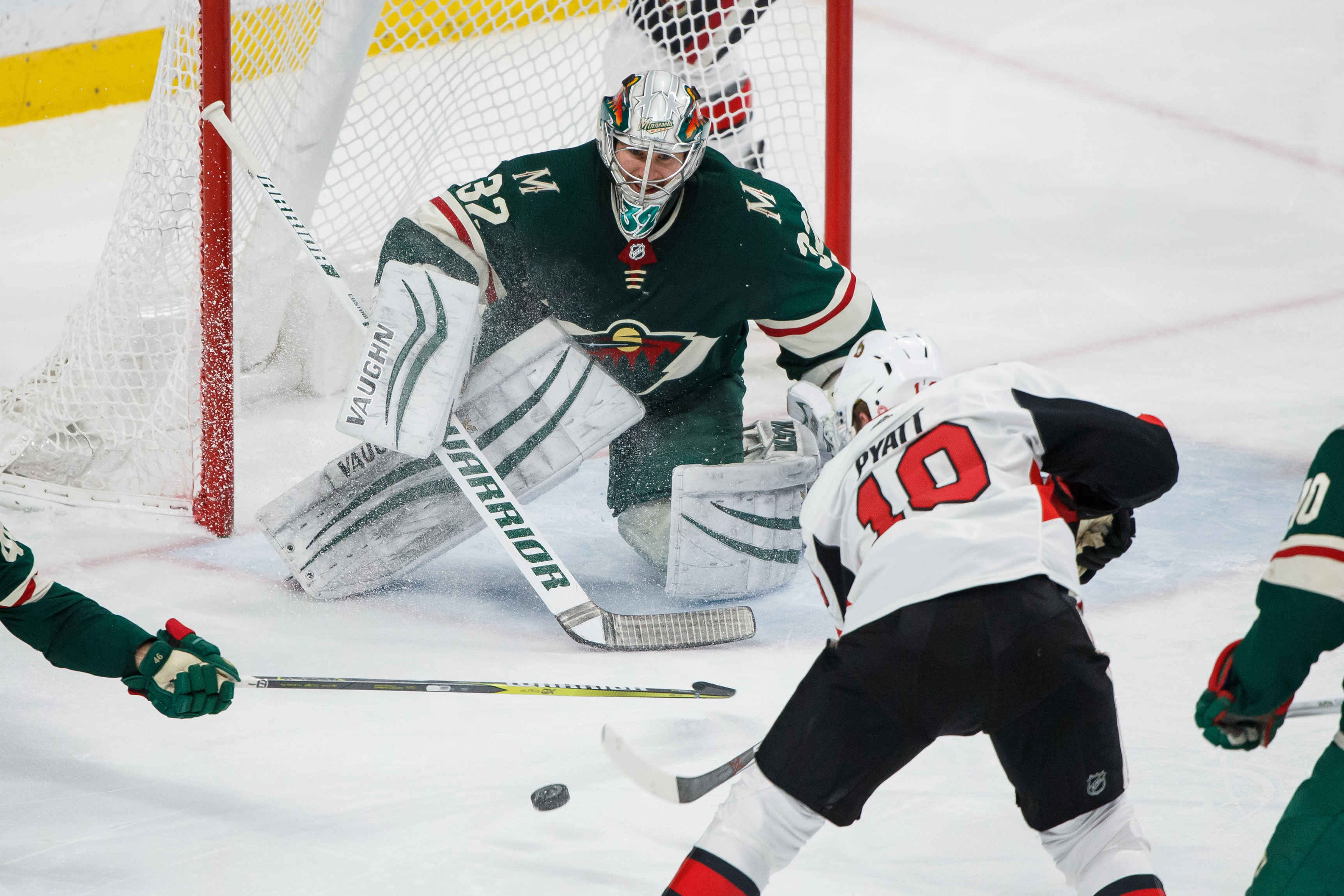 The Vikings recent loss will not deprive the Twin Cities of the Super Bowl, the team just won’t be participating in it.  While for some fans who had somehow had not shielded themselves emotionally from another inevitable failure, for others like myself I simply changed the channel and moved on.  That may sound cold, but I had that moment in 1998 and I wouldn’t let myself get that invested again.  Good thing there is hockey to mend the wounds.  Minnesota is coming off a solid victory over one of the best teams in the NHL, it was an emotional win after its 5-day furlough.

The Ottawa Senators are in some ways similar to the Lightning in their collection of young forwards and a superstar defenseman.  But beyond that, the 2017-18 season has been one to forget for Ottawa.  An owner who taunts at relocation unless a new arena is built, a big trade that has been more fizzle than sizzle and a giant step back from being in the Eastern Conference finals a year ago.  It’s ok Ottawa, Vikings fans understand what let downs are like.  Can the Wild refocus and earn another important win?

1st Period Thoughts:  The Wild would not waste any time jumping out to a lead as Daniel Winnik would send a pass down low to Eric Staal who swept behind the goal and then made a pretty backhand pass across the crease to a wide open Zach Parise for an easy tap in.  1-0 Wild.  With a lot of empty seats due to the heavy snow falling around the Twin Cities, but the lack of the crowd made for a flat environment.  Maybe the lack of energy inside the arena made it tough for the Wild to stay motivated.  The Mikko Koivu, Jason Zucker, Mikael Granlund line would give the club another spark as they created a few nice chances; including a quick shot by Granlund that was fought off by Mike Condon.  The Wild would carry most of the play throughout the period, but the Senators did manage to set up a few quality opportunities as Matt Duchene and Mike Hoffman found a little time and space to send a few shots Alex Stalock‘s direction.  Joel Eriksson Ek continues to impress both with his strength on the puck but also his assertiveness where he tried to beat Condon top shelf that was denied by his shoulder.  Minnesota would get a late power play but Condon and some nice stick work by Mark Borowiecki to deny Staal’s power move.  The Wild would continue to swarm on the man advantage as they set up Mathew Dumba for a one-timer but the former Princeton grad would come up with the save.  It wasn’t the most exciting period, but Minnesota cannot get complacent holding just a 1-0 lead going into the 2nd.  I still like the speed Kyle Rau being in the lineup brings to the team.

2nd Period Thoughts:  Minnesota would dominate the early part of the second period with a number of high quality chances.  Whether it was working the cycle or old fashioned hustle, Minnesota was operating with impunity in the Ottawa zone and the Wild were able to set up their defenseman for some blasts from the point.  Shots were getting through but Condon was squaring up well and doing a nice job of absorbing rebounds and Minnesota wasn’t able to generate second chance opportunities.  Zucker and Granlund continued to flirt with adding to the Minnesota lead as Zucker found some open space down the slot and seemed to have Condon beat but his backhand shot missed wide of the mark.  Unfortunately the missed chances would keep the game close and all it took was one prime opportunity to tie the game.  It would come off an errant pass in the offensive zone which gave Matt Duchene a breakaway and he’d move in and beat Stalock with a backhander.  1-1 game.  The Wild would then go on the penalty kill as Ryan Suter was given a boarding penalty on a check he delivered to Colin White.  Minnesota’s penalty killers did a nice job of challenging Ottawa’s puck carriers and Stalock took care of the rest.  Late in the Senators’ power play the Wild had a great opportunity in a 2-on-1 between Matt Cullen and Winnik.  Cullen was on his forehand side and instead of attempting a pass to Winnik he’d take a shot that Condon stopped and then gather up the rebound and then attempted a wrap around that was rebuffed by the Senators netminder.  Minnesota would really start to pour it on late in the period after the successful kill as Eriksson Ek was denied on a chance from the slot and then a minute later it was Zucker being stopped on a breakaway as Condon kept the game knotted at 1 going into the 2nd intermission.

3rd Period Thoughts:  The Wild looked hungry to start the 3rd period, swarming early and often as Eriksson Ek, Rau, Coyle line was causing havoc in the Ottawa zone.  Eriksson Ek was particularly pesky, stealing pucks and just flying around the Ottawa end.  The great effort was followed up by the Koivu line and after being denied on one connection they’d continue to work the puck and it was Granlund setting up Zucker for a tap in goal.  2-1 Wild.  It was a beautiful pass that eluded a backchecking Brassard and right to the Las Vegas-raised winger.  The Senators would go on the power play as Marcus Foligno tripped up Filip Chlapik.  Stalock had to be solid as he denied Derick Brassard on a chance from in close.  Minnesota was scrambling a bit, but they stepped up with some timely shot blocks to get the kill.  Minnesota would go back on the attack and Fredrik Claesson wiped out Staal with a big check as he was chasing after the puck earning him an interference call that drew a scrum on what was thought to be a dirty hit.  The Wild would cash in on the power play as Granlund made a nice little saucer pass to himself to enter the offensive zone before dishing it to Dumba who then fed it back to Granlund for the the finish.  3-1 Wild.  Minnesota would then go into lockdown mode where they put on a clinic puck possession-wise, working pucks deep and taking away Ottawa’s ability to mount any sort of comeback.  It almost looked like a prolonged Wild power play as Minnesota kept Ottawa bottled up in its own end.  The Senators finally worked the puck out of their own zone and Stalock was there to slam the door shut and the Wild would prevail 3-1.

Alex Stalock was solid, making timely saves to keep the Wild in control of this game as he had 37 stops to his credit.  Stalock seems to exude confidence and his denials on a few close in chances has to have earned the trust of his teammates.  Defensively I thought Nate Prosser, Gustav Olofsson and Jonas Brodin were especially sharp defensively.  Minnesota was perfect on the penalty kill and the Wild backchecked well all game long.

Offensively the team at times was a little fancy with the puck, but for the most part they were setting close-in scoring chances.  The Koivu, Granlund, Zucker line was causing Ottawa fits all night and the line simply outworked the Senators on every shift.  I was also impressed by the effort of the Rau, Eriksson Ek, Coyle line if anything for the effort of Eriksson Ek alone who continues to be snakebit but his determination is fun to watch.  The Winnik, Parise, Staal line was also very good and Winnik has been a good foil as a grinder for pucks in the corners saving Parise some abuse and working pucks to Staal and the defenseman to send on goal.

I like how the Wild poured it on in the 3rd period to come away with an important two points in this game.  Stalock was rock solid and the team didn’t let this game slip away from them like they have earlier in the season.  Minnesota’s win allows them to keep pace with Colorado who won their 10th straight game to stay ahead of the Wild.  Now Minnesota gets a few days to get themselves ready to face the defending Stanley Cup Champion Pittsburgh on Thursday.

~ Crease and Assist: A legally compliant Hockey Blog would like to give our condolences to the family of USA Hockey’s Jim Johannson who was the strongest advocate for hockey across the nation; our thoughts to him and his family.

C – Bryce Misley (Vermont, H-East) ~ It has been a pretty tough transition for the Catamounts’ freshman as he adjusts to playing against bigger and faster college players.  He has battled through a stretch where he was a regular scratch, but when he finally got an opportunity to get some time on Vermont’s 4th line he made the most of it as he had an assist in their 6-3 win over UMass-Lowell on Saturday.  Misley has no goals and just 4 helpers in 19 games this season.

LW – Nick Swaney (Minnesota-Duluth, NCHC) ~ the Bulldogs earned a huge sweep over North Dakota this weekend and the former Lakeville South star did his part by chipping in assist in their 5-2 win on Saturday.  Playing on the Bulldogs’ top line for most of the season certainly hasn’t hurt as he has 3 goals, 13 points and is a +4 in 16 games this season.