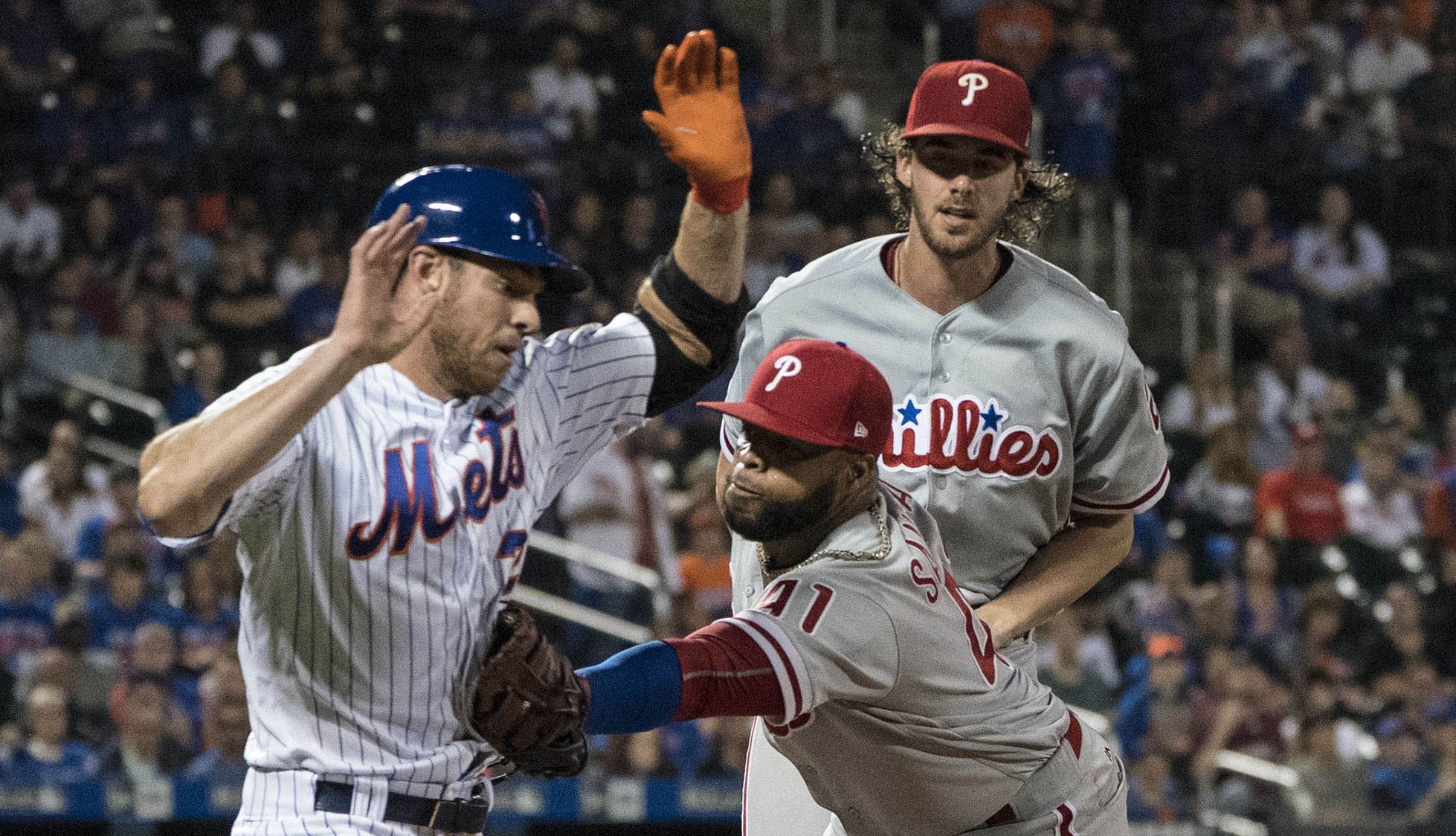 It’s silly to think … as some pundits and people who have been hired to entertain us about the Mets have highlighted … that the Mets would somehow be more motivated to help Jacob deGrom’s Cy Young chances by coming up with offensive fireworks against Aaron Nola and putting a dent in his season. Considering that the Mets have had plenty of other opportunities to help Jacob deGrom’s Cy Young chances by hitting in games where Jacob deGrom actually pitched, the notion of the Mets playing white knight against Aaron Nola on Friday night seemed like contrived media-speak, and by itself a reason not to bother to watch Friday’s game.

Of course, I watched … as much as I could without yelling at kids to get off my lawn and showing them pictures of Rafael Santana while screaming “THIS IS WHO WE HAD WHEN I WAS A KID AND IT WAS GOOD ENOUGH FOR US!!!” Of course, I really wanted to see if the Mets would give Jose Bautista a tribute video because Asdrubal Cabrera was also returning to his former home and you could just see the Mets whipping together a montage of Bautista’s 51 walks as a Met because they didn’t want to make him feel left out and they could do right by him. (All this while telling David Wright he can’t play baseball what with the insurance fraud and all … but he’ll play in a simulated game which I’m surprised the Mets haven’t sold tickets for yet, and I’m sure the Mets will find a way to lose that game too.)

Nola’s ERA did rise … although I have felt cockroach legs thicker than that margin … thanks to a home run by Jay Bruce which came within a roach’s leg of hitting the $350K sign from the New York Lottery, a looping double by Jeff McNeil where he looked like he was swatting a fly (that sounds snarky but I mean it as a compliment to McNeil’s hitting ability), and an opposite field game tying home run in the seventh by Dominic Smith, in a game where he was featured at his normal position of first base (what a concept). But Steven Matz gave up two runs in five innings on a Carlos Santana dinger, Eric Hanhold, who was the subject of Gary Cohen’s awkward segue from SNY’s dating show Prospects to the action on the field (“speaking of Prospects, Eric Hanhold is on to pitch”), gave up a run in the sixth (on a base hit by Cabrera … thanks, old friend), and Rhys Hoskins planted Tyler Bashlor’s flag on the moon in the eighth. The Mets went down 1-2-3 in the eighth and ninth innings to seal a 4-3 loss.

A 4-3 loss to the Phillies with a meek and uninspiring ending is the epitome of all that is uninspiring. Not every loss can be a walk-off to the Marlins. But this, like many other games you’ll see this month, was played because the schedule said so, and it felt like it. This was Van Halen’s acoustic remake of Happy Trails because they needed something to end the album. (Though I’d rather listen to that for two hours and 43 minutes). This was the rice pudding of losses (I guess Todd Frazier’s play in the first was the optional cinnamon). This was plain yogurt, Vin Diesel, and the DMV rolled up into one. Get ready for a whole load of this in September.