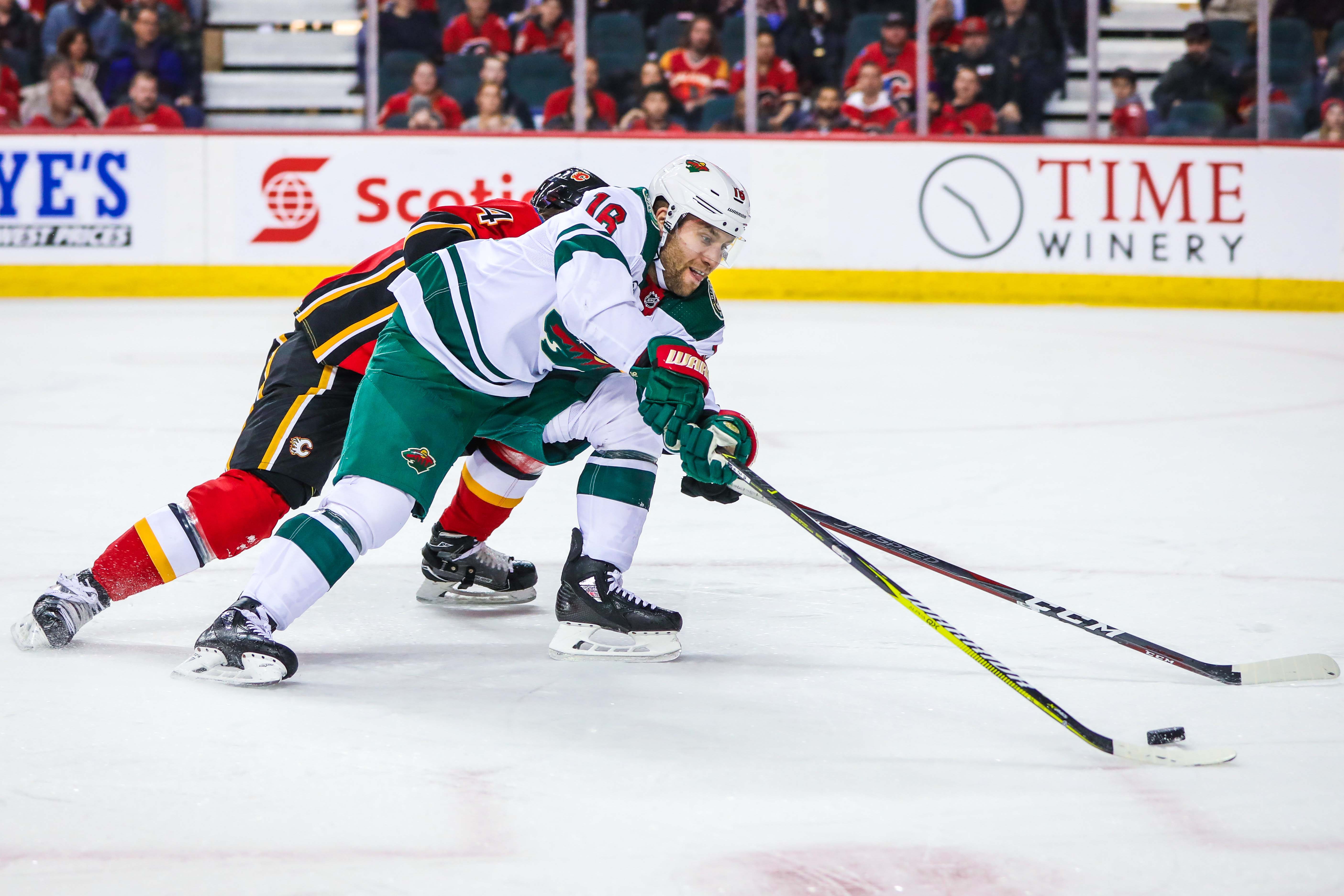 As the smoke continues to clear from what was an eventful and perhaps ‘messy Monday’ the Minnesota Wild showed little ill-effects as they pulled off a late upset win over the Winnipeg Jets on Tuesday.  The Wild now travel to Calgary to face a team that Minnesota has more than a few scores to settle with.  First, the Flames are the ones responsible for hurting Matthew Dumba and while they might be miffed at how the near but not quite trade of Jason Zucker unfolded then that’s just karma.

The Flames are the top team in the Pacific, with one of the most potent offenses in the league.  They play fast and they don’t mind dishing out hits and cheap shots.  Can Minnesota put out the Flames with a victory tonight?

1st Period Thoughts:  The Flames were working pucks deep early and often to start the game.  To Minnesota’s credit, they were not giving the Flames much time and space and were getting sticks on pucks which forced Calgary to settle for shots from the perimeter.  The Wild would finally work the puck down low as Jason Zucker fed a pass from beneath the goal line out front and into the slot where Eric Staal was left all by himself and he hammered it home.  1-0 Wild which silenced the sellout crowd.  The Wild seemed to take control of the pace of the game for the next few minutes after the goal.  While Minnesota was moving its feet well, Wild skaters were not finding much room on the ice to operate.  One player who seemed kind of disengaged for the Wild was Pontus Aberg who floats around the ice just hoping someone feeds him the puck and rarely getting involved.  The Flames would catch the Wild a bit flat footed as Sam Bennett raced by Ryan Suter and crashed the net and collided a bit with Devan Dubnyk and it appeared Austin Czarnik poked it in.  The play was initially ruled a good goal but the Wild would challenge the play for goaltender interference.  After a fairly quick review, it was determined there was goaltender interference and thus ‘no goal’ much to the relief of the Wild bench.  The chippy play between the two teams started to manifest itself seemingly after every whistle, pushes, shoves, occasional punches.  Joel Eriksson Ek was looking exceptionally poised as the 3rd line center winning board battles and distributing the puck with a lot of confidence.  Even as a Brad Hunt shot was blocked, Eriksson Ek who was at the end of the a shift did a nice job to contest Andrew Mangiapane so he couldn’t generate a scoring chance as he was hoping to use his wheels to create a partial breakaway.  The Flames would come dangerously close to tying the game as Johnny Gaudreau set up Sean Monahan for a quick shot that Dubnyk managed to steer wide.  Matt Read was looking pretty good as his backhand bid was stopped by Mike Smith.  Minnesota was playing smart defensively, having a good gap against the Flames’ top players.  A lazy clearing attempt by Staal would keep Minnesota hemmed in its own end, and that would lead to a hooking call on Jared Spurgeon in the closing seconds of the period.  Minnesota would lead 1-0 after 1 which was good but the Wild were playing with fire a bit (no pun intended).

2nd Period Thoughts:  The Flames had the power play to start the 2nd period, but Minnesota’s penalty killers and Devan Dubnyk were sharp and he Wild would kill it off.  A few minutes later the Flames Garnet Hathaway would try to deliver a hit to Luke Kunin who attempted to jump away from the hit and Hathaway would grab the back of Kunin’s head and slam it to the top of the boards along the Wild bench.  While the Wild training staff attended to Kunin, the officials would discuss the play and Hathaway would get a match penalty and was tossed from the game to a chorus of boo’s from the home crowd and the consternation of Flames’ head coach Bill Peters.

On the power play the Wild looked disorganized and struggled to get set up in the offensive zone as the Calgary penalty kill looked like a blockade set up near its blueline.  As Minnesota dumped it in and tried to chase it down the Flames would win the race and clear the zone.  The Wild finally would get a little offensive zone time and it was Ryan Donato getting a step on a Flames defender and he’d rip a shot on goal that hit the left post and out.  Unfortunately shortly after that holding call on Kevin Fiala would kill off the rest of the man advantage.  The Flames had a short abbreviated power play and they’d make the most of it as Gaudreau found Monahan camped near the Wild goal for an easy tap in.  1-1 game.  The Wild seemed a bit passive after the goal and Calgary was pressing for the go-ahead tally as they set up Matthew Tkachuk for a one-timer from the slot that Dubnyk got a piece of to direct it wide.  The Wild just appeared to be nervous with the puck as lazy attempt to poke the puck out of the zone by Suter who then tried to chase after the puck and Bennett rang a shot off the right post with entire net wide open to shoot at. Check it out for yourself…

As much as the Wild were being outplayed the Flames were a bit loose in their own end and Minnesota had some chances to score of its own.  A penalty on Kunin gave the Flames dangerous power play a chance to get the go-ahead goal but good hustle and puck pressure allowed the Wild to get a big kill instead.  Minnesota would do their best to defend in their own end and the game would be knotted at 1-1 going into the 2nd intermission.  Not a great period for the Wild, but they’re still very much in this game.

3rd Period Thoughts:  The Wild seemed to want to exercise a bit more initiative in working pucks out of their own end.  Minnesota was taking its chance to shoot the puck whenever an opportunity presented itself.  The Wild was using its younger players more and it was noticeable in how Minnesota was able to exit the zone.  As the Wild dumped a puck deep, Mike Smith left his crease to play the puck as he had been doing all game and Eriksson Ek would charge in for the puck and force a turnover and outbattled Smith and Noah Hanifin before working a pass out front to Read who banked a shot off Mark Jankowski‘s skate and into the empty net.  2-1 Wild to the frustration of the home crowd.  A shift later, Smith left to play the puck and as he passed it successfully to a defenseman, the home crowd gave him a bronx cheer and the Flames goalie raised his hands over his head to acknowledge it.  Minnesota would sit back into a passive 1-2-2 and try to force turnovers in the neutral zone and beat Calgary on the counter attack.  Devan Dubnyk was seeing the puck well as he gloved a point shot by T.J. Brodie while having to look around a screen by Monahan.  Minnesota counter attacked and Fiala nearly forced another turnover behind the goal as Smith again left his crease to play the puck and as he worked a pass out to Zucker who hammered a shot on goal that Smith fought off.  Jordan Greenway would poke check a puck past a Flames defender and he’d race down the ice as Aberg tried to work himself open for a pass which drew the defense back towards the goal opening a trailing lane for Suter.  Greenway dropped the pass back to Suter who skated into the slot and ripped it glove side by Smith.  3-1 Wild.  On the next shift, Smith would make a save and hear another even louder bronx cheer from the home crowd.  The Flames would cut the lead in half as Travis Hamonic ripped a shot that beat Dubnyk who was partially screened and probably didn’t see it.  3-2 game with a little over 5 minutes left to play.  With the Flames pressing so much, the Wild looked to counter attack as Donato would skate into the zone and with no other options would wind up and blast a slap shot from the high slot that snuck through Smith, 5-hole.  The Flames would challenge the play saying the Wild were offsides but the replay seemed to indicate it was onsides.  The officials would say the Wild were onside so the goal would count and the Flames would get a 2-minute delay of game penalty for being wrong with 1:42 left in the period.  4-2 Wild.  Minnesota was methodical on the power play, preferring to attempt the fairly safe perimeter shot as the Wild kept Calgary busy in its own end for almost a minute.  The Flames would break out of their own zone and pull Smith to make it 5-on-5 where they’d try to work a puck near the crease and Tkachuk tried to jam home a shot by Dubnyk was able to make the stop and Minnesota prevailed 4-2.

~ Attendance was 19,289 at Scotiabank Saddledome.

Iowa dominated the play at the start of the 3rd game of this strange 3-game series against the Barracuda.  Iowa was peppering Josef Korenar with shots early and often.  Their persistence would be rewarded late in the period as Mitch McLain scored off a rebound Korenar gave up from a close range chance by Matt Read.  1-0 Wild.  In the 2nd period, the Barracuda would answer back with a shorthanded tally as Nicholas DeSimone scored.  Iowa would take back the lead about two minutes later as Cal O’Reilly took a drop pass from Gerald Mayhew and ripped a shot from the slot that beat Korenar cleanly.  2-1 Wild going into the 2nd intermission.  This is where the wheels fell off as San Jose struck 4 times in the 3rd as Cavan Fitzgerald, Iowa-killer Dylan Gambrell, Jeremy Roy and Jonathan Martin found the twine behind Kaapo Kahkonen to give San Jose a 5-2 lead.  Mayhew would get one back, his team-leading 19th tally, late in the 3rd but it wasn’t enough as Iowa fell 5-3.  Kahkonen had 27 saves in the loss.

LW – Kirill Kaprizov (CSKA Moscow, KHL) ~ the Russian winger had an assist on 3 shots in CSKA’s 6-2 win over Vityaz Moscow which puts them ahead 2-0 in their series.  Kaprizov has 2 assists in 2 playoff games thus far.