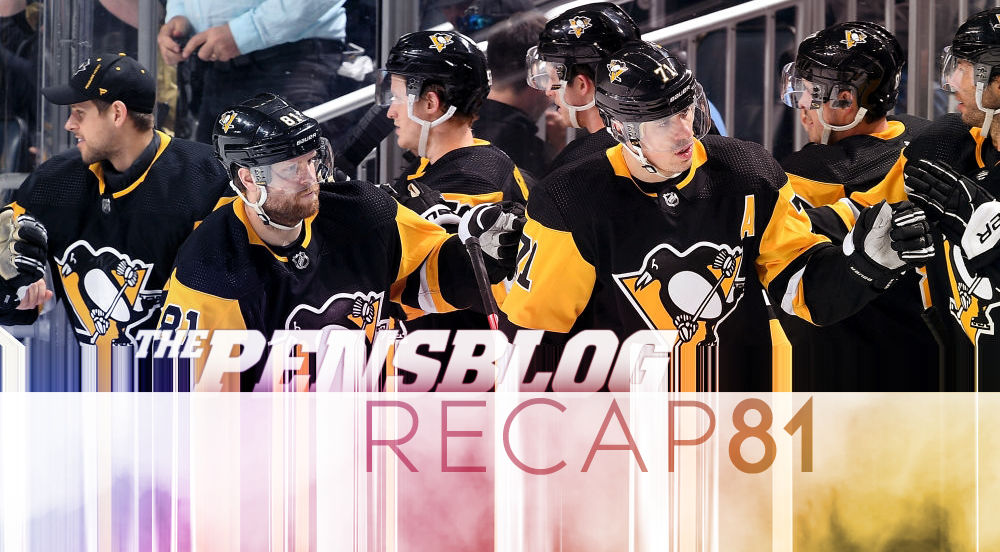 Let that sink in for a minute.  Bask in its effervescent glory.

Does it make you harder than a diamond in an ice storm?  Are your loins so frothy that you could drown an Olympic water polo team?

With last night’s convincing 4-1 win over the Wings, coupled with the Islanders shootout win and Canes 3-1 win over New Jersey, we know who the Penguins are going to play in the first round: Washington or the Isles.

Saturday is for all the marbles.  If the Pens get at least a point at home against the Rangers or a Carolina loss in any fashion in Philadelphia, it’s a first round date with the Islanders.  A regulation loss and a win of any fashion out of the Canes and we’re going dancing in DC.

There still in a scenario where the Penguins finish 2nd in the Metro, too: First and foremost, the Pens need the Caps to beat the Islanders in regulation.  Then, if the Pens win in any fashion, they’ll overtake the Islanders for the 2 seed by one tiebreaker or 3.

No matter how things shake out, and no matter whether you’ve been around to feel the taste of defeat from David fucking Volek or remember the pain you felt seeing rats rain down from the sky or haven’t seen the Penguins miss the playoffs in your fandom, it doesn’t matter.

We're calling in the veterans.

Welcome back to the lineup, @emalkin71geno and @Letang_58.

Things that are a welcome sight: a unicorn made of cocaine riding a grizzly bear through the Rocky Mountains coming to rescue you from a swarm of hornets, an attack helicopter laying waste to all of the enemies you made on the internet, and Evgeni Malkin and Kris Letang returning to the Penguins lineup.

Things that are not a welcome sight: Brian Dumoulin still being unable to lace ’em up and return to the lineup.

With Letang’s return, it pushed Zach Trotman back out of the lineup, hopefully for good this time.  With Malkin’s return, Adam Johnson found himself in the pressbox and Ted Boy found himself back down on the 4th line as the lone changes from the side that fell in Detroit.

Pens buzzing to open the game, looking like a team that wanted to get this playoff berth done and dusted, including getting a powerplay 2:11 into the game.  The Wings had about as many chances shorthanded as the Penguins had on the powerplay.

Even up call came about 90 seconds after Frk was released from the bin after Guentzel got rung up for interfering with Mantha.

Things went totally off the rails for the Pens PK here.  With the Wangs whipping the puck around the perimeter, it got Jack Johnson and Bryan Rust chasing the puck down low.

Johnson slowly recovers here and gets himself back to his post in front of the net, while Kuffner is bodying up on Gudbranson and sitting him down like a small child that stole a misplaced screw from the Hallmark Store.

One-timer point shot comes in and bypasses both Wilson and Gudbranson for Murray to kick out, but the rebound eludes Kuffner, Puempel, Johnson, Gudbranson, and Rust and ends up on Hronek’s stick at the center point.

Hronek sells shot before moving it over to Hirose to give it back to him and lay into it, but with his pass over to Hirose, Johnson chased the pass and left Puempel and Kuffner all alone in front with Gudbranson.

Gudbranson freezes in front of Murray and with no one even attempting to tie up Puempel, he gets his stick on the rocket and tips it by Murr.

About two minutes later, Murr had to step up big time and rob Frk on a breakaway to keep this a one goal game after Frk burned Johnson and Jultz.

That save set up the big boys with a big boy chance to tie up this big boy game.

Starting from a d-zone faceoff win from 87, Letang whipped it around the wall for Money Bag to tip forward and McCann to give chase on Witkowski, who is not a defenseman.

That key fact was key as he just blindly rifled the puck over to the other side of the ice where Crosby was lurking.  Sid wins it, knocks it down deep to McCann and it was game on.

McCann gets dumped, the Wangs take control of it, but they instead gave it to Letang at the right point.

Pens went to work down low, Guentzel got a nice little snap look in front that Howard turned aside, but only as far as a quick pinching Maatta.

Great read from the Finn here and even better recognition that Turgeon was selling out for the shot block to walk him, round the corner, and hit Money Bag in a soft little area to live this up.

Great read from Maatta here to pinch and roll in down low to feed the beast. Give Guentzel 39 on the year pic.twitter.com/iH9mdsTBBq

Pens were all jacked up on Mountain Dew following the goal and ended up drawing another penalty with Mantha high sticking McCann as the Pens controlled play in the offensive zone with just under 3 to play.

This time, the Penguins weren’t dicking off.

Early on, the Wangs got it clear, but that stupid ass drop pass at the far blue line set Phil! up to bomb into the offensive zone, exchange with Hornqvist, and create a battle in the corner for the puck.

Admittedly, Crosby tries to force a pass to Phil! that just wasn’t there, but even Crosby completes that about 75% of the time.  Bowey just made a nice play to block if off, but Bowey didn’t account for Patric Hornqvist beating a mother fucker with another mother fucker, taking Hicketts and Bowey and Turgeon with him as he hacked and whacked at the puck to keep it alive.

Crosby did the rest, getting it on net and jarring it loose from under Howard for Phil! to smash home like he smashes hot dog sammies.

That about summed things up for the Pens in the first.  The PPG against notwithstanding, they were totally dominant at 5v5 and buried the Wings.

Wide open start to the period in which it was Matt Murray facing the high quality chances because it was the Red Wings controlling the majority of the puck for a large chunk of the period.

It was Matt Murray’s period.  We were just here for the ride.

Then, with 5:08 left, Johnson got his stick up high on Bertuzzi, who proceeded to go down like his brain matter exploded as if he was JFK.  Both ended up getting 4 minute matching minors on it.

And after a good look from the Crosby line, it set the stage for Phil! to net another one off the James Neal Play.  That release is just something else.

Dude nearly netted his hat trick goal like 15 seconds later, but was denied.  As was Hornqvist on a breakaway on the next shift, taking us to the 3rd period at 3-1.

Game flow through 2: Murr stemmed the tide to start the 2nd until the Pens could take back over and extend the lead in the process.

Similar start to the 3rd as the 2nd: Wangs living in the Pens end, Murr making the saves.

It gave the Pens a chance to make it a 3 goal lead and put this shit to bed when Larkin went off for tripping up McCann 3:17 into the period.

They chose to let this shit stay up a little later than usual, as long as it brushed its teeth.  They weren’t without their chances, though.

But for some reason, Athanasiou picked up a 2 and a 10 for unsportsmanlike conduct during a TV timeout.

They would not let this one pass them by either.

Easy peasy as the Wings tried to keep possession to kill the penalty in its infancy, but Kris Letang was having none of it.  Larkin is forced to make a pass in the neutral zone with Hornqvist bearing down on him, but watch Letang when the pass gets made towards Ehn.

He just absolutely dismantles the entire play, rips Ehn’s arm from his body, and feeds it to him like it was the last piece of meat on earth.  Then 58 still has the wherewithal to move it up the boards to Geno.

That gave Gene the space to wind it up, hit the line with speed and force the Wings defenders back before dropping it off to Hornqvist to combine with Phil!

Unreal bad luck for 81 here, hitting the post, hitting Howard in the numbers, and having it stop just short of the goal line and the hat trick.  Fortunately, 87 was there to vulture the goal and end his 10 game goal drought.

Hornqvist's bear hug tells you all you need to know about how happy they are for 87 pic.twitter.com/rydvFnNkL0

Rust would go on to make things interesting by taking a slashing penalty midway through the period.  They’d kill it off and Murr would go on to kill the game off.

Murray's ability to A) locate this puck after it goes off the post and B) get over to deny Frk with the stick is just obscene pic.twitter.com/B0PoGbhFkV

Bang.  Bring on the playoffs.

Regular season finally wraps up Saturday night when the Rangers come to town.  It’s been a ride.  Go out on a high.  Do it.  Go Pens.