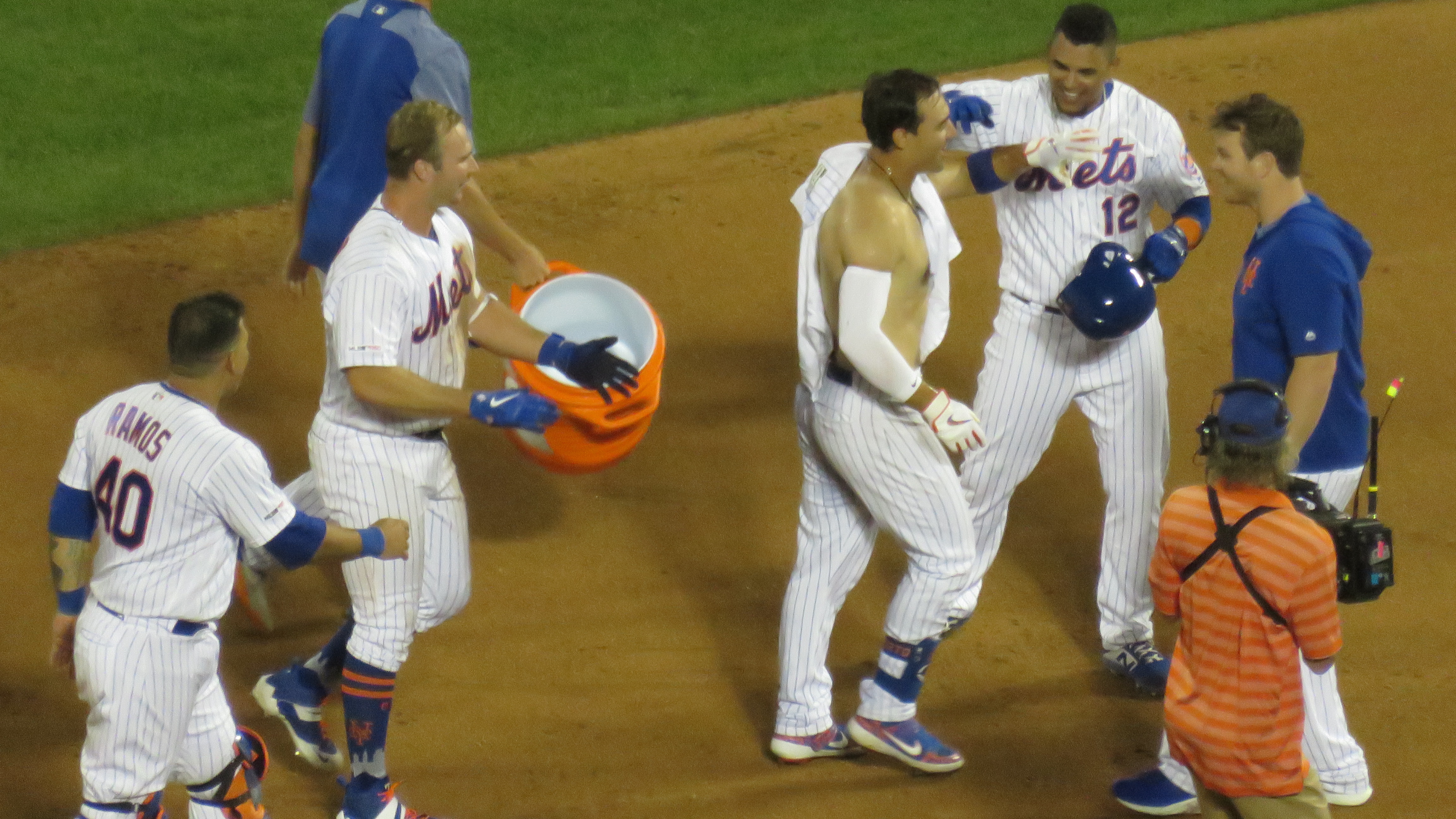 There’s so much to wade through from Friday. Let’s start at the beginning:

Marcus Stroman’s Citi Field debut was anything but dull (Metstradamus)

The first thing you notice about Stroman, if you’re sitting in the right spot, is how the sun reflects on the charm around his neck. This isn’t meant to be a commentary on baseball players wearing jewelry. He can wear an entire Kay Jewelers franchise around his neck if he wants. But it’s a metaphor for Stroman coming to us with a little sparkle. It was kinda cool … like a toothpaste commercial where the gleam comes off the actor’s teeth. Stroman comes with a figurative and literal sparkle, a gleam, whatever extra you want to call it. Stroman has it.

The second thing you notice, or at least I noticed from the upper deck, was that when Marcus Stroman is pitching in a game for you, you and that game have every bit of his attention. He’s not the quickest worker in the world, but every drop of heart and soul and mind he has is poured into every pitch. He’s definitely a pitcher that runs on equal parts emotion and thought. The wheels are turning and the afterburners are on. He worked his way through a tough first inning but struck out Juan Soto to end it. Watching the highlights later you could clearly see that Stroman was cognizant of the crowd and of the moment … pointing to the stands saying what looked to be “I feel you, I feel you.”

Juan Soto was one of nine strikeout victims for Stroman (Metstradamus)

Stroman struck out seven through the first three innings and then here comes the fourth. Now in retrospect, the glaring sign that things were going to go our way was the Anthony Rendon RBI triple. That sounds weird, but Rendon’s gapper caused Jeff McNeil and Michael Conforto to collide awkwardly and collapse in a heap at the warning track, with Conforto ambling to his feet to get the ball back in the infield. The one thing I said at that moment, and here’s our signal, was that both players got up, walked away, and remained in the game. (If this was 2010 or some similar season, both players would have been ridden off in an ambulance, causing tire tracks on the grass causing a third injury later in the game.)

Soto hits the home run to make it 3-0 and my plan to change the mojo goes into effect. I go down for rice balls at that moment instead of waiting for after the fourth inning. I don’t know if it changed any sort of luck, but what it did mean was that I was on the rice ball line in the lower level for the home runs by Pete Alonso and J.D. Davis to tie the game. (Yes, I know there’s a rice ball stand in the top level, but that one doesn’t have the monthly special, which is the cheesesteak rice balls … OMG!) Even in the lower concourse where everybody’s attention is on food, it feel electric when Alonso and Davis hit their balls out off Stephen Strasburg, who had been sharp up until that point. Probably the best compliment I could ever give a crowd/atmosphere at Citi Field is to say that it felt like Shea. Those two home runs … even on a line for rice balls … felt like Shea.

More Than A Feeling

I had predicted we were in for a good one. Once we got to the seventh inning I knew there was no turning back on this. Our hearts were either going to soar or be busted in half. When Anthony Rendon hit a two run homer in the 7th off Justin Wilson, of course I was leaning towards the latter, but I didn’t think the Mets were out of it. The backbreaker was Wilson Ramos letting the sixth run score on a wild pitch that got no more than two feet away from him. With Luis Avilan striking out Matt Adams on the next pitch, it seemed like a waste of a run was going to be the one to kill us.

This one was almost the back breaker. Instead, it just added more drama. (Metstradamus)

Sometimes you can spot that a closer doesn’t have it fairly quickly. When J.D. Davis led off the bottom of the ninth with a double against Sean Doolittle (who had been Mariano Rivera against the rest of the league and Mel Rojas against the Mets this season), I wondered whether this could be one of those nights. The vibe from the crowd on that hit wasn’t even pensive hope. It was confidence that the Mets were going to win this game, and I was swept up in it. Wilson Ramos then singled to put runners on first and third for Todd Frazier. Of course my instinct was to think “dammit Todd if you screw this up …” but then I noticed that the video board showed that Frazier was 2-for-4 lifetime against Doolittle with a double and a homer (pretty much like the rest of the Mets) and then I figured “well if he sees something he likes who knows …”

The ball hit the Porsche Grill, and it still couldn’t have been higher off the ground than Frazier’s bat after he flipped it in the air. My wife mouths to me: “Todd Frazier???” I know. I couldn’t believe it either. So now we’re all in. Three run HR makes it 6-6. This is either going to be wonderful or it’s going to be Terry Pendleton. (To be fair,  I think Terry Pendleton will be around every corner that I turn.)

Then the new guy gets a hit.

Then, after a fielder’s choice replaced Joe Panik with Juan Lagares, Amed Rosario went down in the zone and singled to left. Rosario’s contributions will be buried in this game, and understandably so. But let’s not forget them. He had three hits which included one to lead off a rally in the bottom of the 6th, and this one to extend the 9th. He also made a leaping catch on a screaming liner in the top of the 6th which was a huge play in keeping the game tied at that point. Rosario is slowly becoming an unsung hero on the Mets.

The Foul Ball Heard Round My Head

This is going to sound weird, but I kept thinking throughout the game how well Conforto is seeing the ball. The weird part is that it was a foul ball that he hit earlier in the game that really crystallized it for me. Conforto singled in the sixth to give the Mets runners on first and third to start a rally that ultimately fizzled. But in that at-bat, Conforto pulled a foul ball way up into the Promenade … halfway up section 502. Baseballs don’t usually get pulled way up into the upper deck foul … but Conforto is seeing the ball so well that he’s getting a jump on a fastball and putting it up in the cheap seats. You already knew how far he could hit a ball after home runs he hit back in Chicago last week and up in the top row of the Coca-Cola Corner on Monday. There were two home runs on Wednesday. Now he’s jumping on balls and hitting them to section 502? Man, watch out in the next few weeks, league.

So it was imperative that Conforto get a look against Doolittle. Rosario’s third hit made it possible. Conforto then sent everyone into a frenzy.

It was Conforto’s first ever walk off hit, and it gave the Mets 14 wins in 15 games. Maybe most importantly, if anybody … inside that clubhouse or out (mostly out) … had any doubts about the Mets keeping this up against a good team, and off a good closer, those doubts have been put to bed. The Mets will lose again. They’ll break our hearts. They still have enough flaws to keep them from fully taking control of this playoff race. But the way they’re going now after beating a team like Washington, the confidence in that room has to be an an all-time high. And if the Mets do make the playoffs, this will indeed be the one they play over, and over, and over again. This might actually be the game that defines the Mets when it’s all said and done.

Just as we all thought.