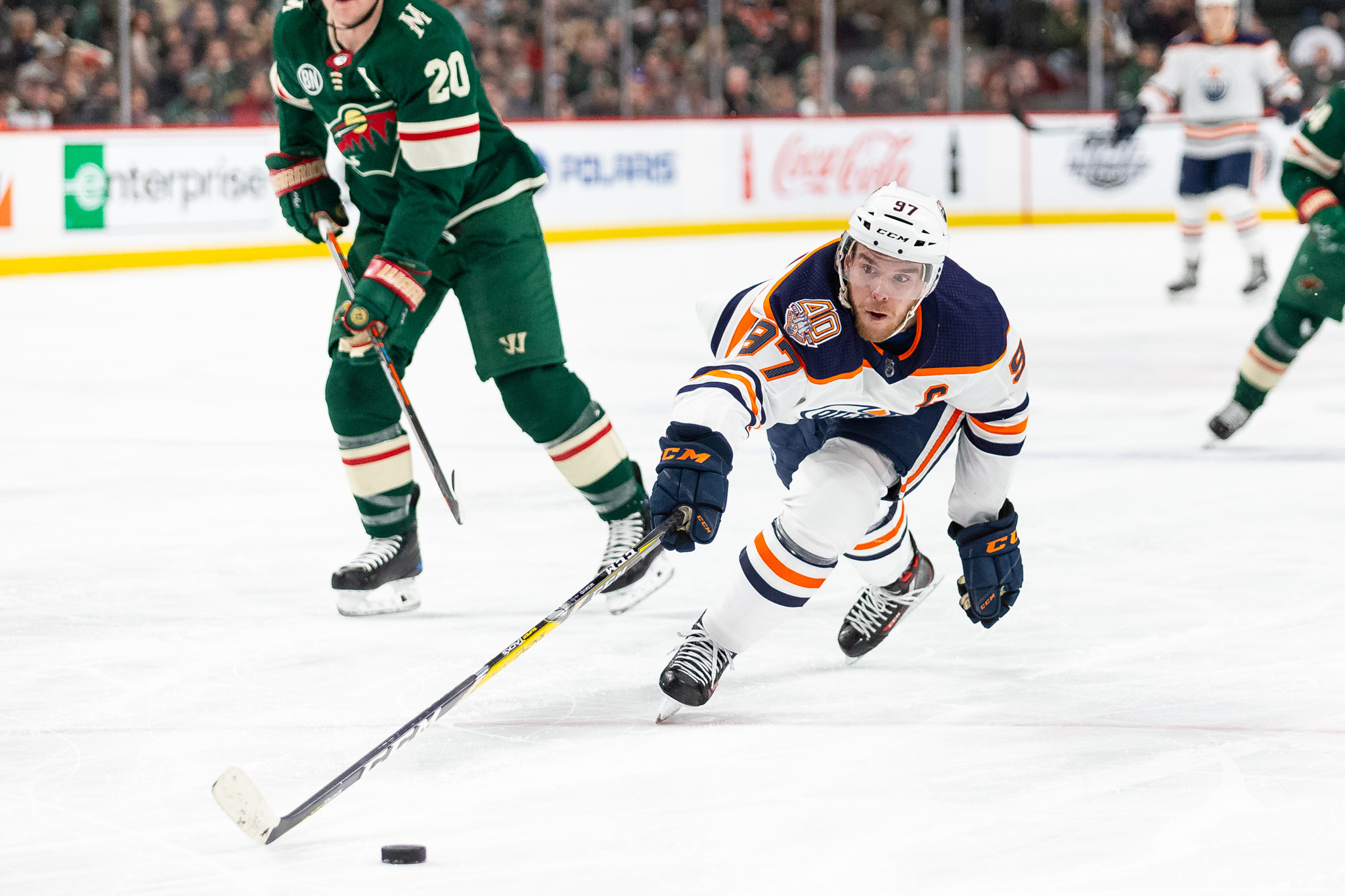 I suppose we should all breathe a sigh of relief…and perhaps show even a modicum of excitement. Yes, the Minnesota Wild got their first home win of the season. Part of the excitement should be that the win came against the team they last played against. I’ll admit, I was a bit worried that Sunday’s outing against the Montreal Canadiens would have been a repeat of Thursday night’s outing at Bell Centre. There were several moments during Sunday’s game that I was sure we were going to see a repeat. Thankfully though, that repeat didn’t happen. Now we have to return ourselves to reality, although I doubt many of us are living in some sort of dreamland that takes us to the promised land of a Stanley Cup.

Tonight’s opponent, the Edmonton Oilers boasts an impressive 7-1-1 record coming into Saint Paul. Just looking at their top point scorers almost puts me under my desk in the fetal position and crying. It’s just not fair sometimes to see those kinds of numbers. But then I have to remind myself of a few Edmonton truths. First off, they had to complete suck for many years. All of those bad years got them the roster they have now. Heck, they’ve even shed some of those impressive draft picks over the years, like Taylor Hall now in New Jersey. The other Edmonton truth, is that while they have all of this stockpiled talent, they have yet to do anything with it. It hasn’t gotten them to the Stanley Cup finals. They’re now too good to cash in on more extraordinary players but not good enough to go all the way. So in the meantime, they’ll just beat up on teams like Minnesota.

I would say the big difference in Edmonton this season when compared to other seasons would be goaltending. Both Mike Smith and Mikko Koskinen are looking impressive. I’m not sure if those numbers are the result of them both playing so well or the fact that the skaters in front of them are finally giving them the support that they need. I’m not sure either of those will last. I mean this is Edmonton we’re talking about here. Of course there is the deep irony that our very own Devan Dubnyk was once part of the Oilers when they were at their worst. Now when the Wild are at their worst, Dubnyk is resembling himself when he was part of the Oilers. That is not good, nor is it a compliment of any kind. While neither Dubnyk nor Alex Stalock have gotten much when it comes to support from their skaters, they simply have to be better than they have. Everyone needs to find their better selves, and against an opponent like tonight’s, tonight would be a good time.

Remember earlier in the season when the Wild’s special teams were looking great? Well, that’s not the case anymore. Every game, both the power play and the penalty kill and slipped further and further. So between the not-so-great Minnesota power play and their continual march to the penalty box, I just get upset with each time we head to either the power play or the penalty kill. 5-on-5 is hard enough these days. So while I sit here and fret about the Wild’s chances with special teams, a team like Edmonton just has to come and visit. I mean come on, they’re sporting an almost 40% power play, which puts them atop the league in that category. No need to remind you of names like Connor McDavid, Ryan Nugent-Hopkins, or Leon Draisaitl right? Heck, Nugent-Hopkins isn’t even in their top five when it comes to scoring. Yikes. Then you combing that #1 power play with the #3 (at time of writing) penalty kill, and they’re a force to be reckoned with.

So yes, Sunday’s game definitely gave a small glimmer of hope. But again, we’re in such a hole right now that those glimmers of hope are going to be fleeting. I’ll simply be pleased getting out of this game without being completely embarrassed.