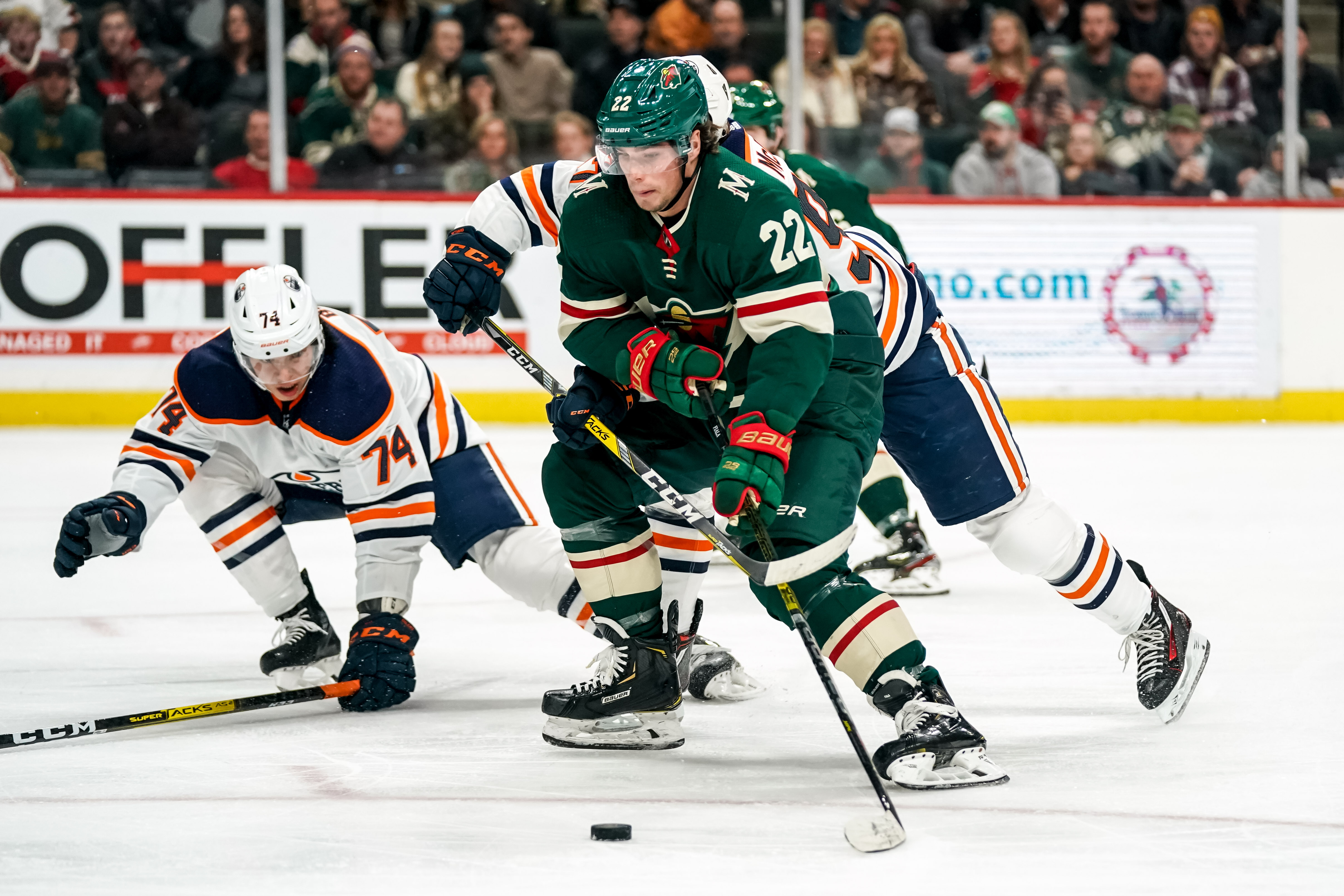 I realize that everyone’s relationship with their dad is different.  Some are close, others are distant or strained and for others there never was one at all.  My relationship with my dad is pretty good, supportive yet we both enjoy giving each other plenty of grief over just about anything.  One thing my dad and I have done throughout our lives was talk about sports.  Whether it was about the Minnesota Twins, Golden Gopher football / hockey, the Minnesota Vikings or the Minnesota Wild.  We love sports and have spent the majority of our lives around them or being involved in with it.  I am sure it drives our other families members nuts when my dad and I get into a sports conversation that will last hours and hours.

I have little doubt that for many of the ‘Minnesota Wild dads’ involved in this year’s father-son trip its probably much the same.  After a shootout win over Vancouver the Wild make their way to take on a beat-up Edmonton Oilers’ squad trying to take back the top spot in the Pacific division.  Can the Wild earn another big (and important) road victory?

1st Period Thoughts:  The Oilers would take the lead just 50 seconds in as Kailer Yamamoto weathered a check and then fed a pass into the slot to Ryan Nugent-Hopkins who beat Alex Stalock with ease.  1-0 Oilers.  Minnesota would try to answer back with its hard working 3rd line that used its big frame to protect the puck and set up a Ryan Suter shot from the point while they tried to create some traffic for Mikko Koskinen to deal with.  Bad line changes were an issue for the Wild early in the game as they gave Edmonton some extra scoring chances because of being late off the bench.  Minnesota tried to work their way in close as Matt Dumba pinched down low that forced Koskinen to scramble a bit in his crease as he made a stop.  The effort level was kind of inconsistent as some Wild players clearly were hustling and showing a sense of urgency while others seemed to just be floating through their shifts.  Leon Draisaitl would skate through an absent-minded Wild defense and he’d ring a shot off the ice.  Edmonton was outhustling the Wild and Gaetan Haas would fly into the Minnesota end and hammer a shot on goal that was blocked aside by Stalock who had to be sharp as his team still appeared pretty sluggish.  The Wild would finally answer with a goal of its own a few shifts later as a point shot by Suter drew a big rebound from Koskinen and an alert Kevin Fiala was able to gather it up and swing a backhander into the empty cage.  1-1 game.  The Oilers would go back on the attack and Ryan Nugent-Hopkins would bury another nice set up from Yamamoto.  2-1 Oilers.  Minnesota tried to answer back with its 4th line as Ryan Hartman ripped a shot that Koskinen knocked down before diving to cover up the loose puck for a whistle.  A few minutes later some good work on the forecheck by Mikko Koivu forced a turnover in the Oilers’ zone as Hartman backhanded a shot from the slot that Koskinen denied with a fine save.  The Wild kept working hard as they pressed for the equalizer but a chance by Zach Parise was steered aside by Koskinen.  The 4th line had another good effort as Victor Rask forced a turnover on the forecheck and this turned into a few more shots on goal from Koivu and Hartman respectively.  Minnesota probably deserved a little better fate but they will be well served to keep sending shots and bodies on goal as Koskinen was making nearly every save a bit of an adventure.

2nd Period Thoughts:  The Oilers’ top line would pick up where it left off from the first period as Leon Draisaitl would set up Ryan Nugent-Hopkins for a chance from the slot that was just steered aside by the glove of Stalock.  The Wild would tie the game a few minutes later as Carson Soucy ripped a shot from the point that went high glove side on Koskinen.  2-2 game.  But the good feelings would be short-lived as Draisaitl would try to backhand a pass back to the point that deflected off the skate blade of Jordan Greenway and flutter back over the shoulder of Stalock who didn’t see the puck until it was too late.  3-2 game.  The Wild tried to respond with another quick strike as Mats Zuccarello set up Alex Galchenyuk on a partial breakaway chance but Koskinen was able to shut the door as Galchenyuk got pushed into the net by Caleb Jones.  The Wild kept applying pressure and the modified 4th line would cash in as Victor Rask set up Jared Spurgeon for a slap shot that blazed by Koskinen tying the game up at 3-3.

GOAL. Albert native Jared Spurgeon ties it with a slapper from the right faceoff dot.

Soucy would trip up former Brainerd star Josh Archibald giving the Oiler’s power play its first opportunity of the game.  On the man advantage, the Wild were very aggressive against Edmonton’s puck carriers as they tried to deny time and space.  Minnesota would get the kill.  As the period wore on, there was more feisty play after the whistle as there were regularly pushing and shoving after any save.  The Wild had a great chance in the closing seconds of the period as Parise had a partial breakaway but his wrist shot was blocked to the corner by Koskinen as he kept the game knotted at 3 goals apiece.

3rd Period Thoughts:  Adam Larsson would high stick Zuccarello giving the Wild its first power play of the game.  Minnesota’s power play moved the puck well and set up a number of high quality scoring chances as they clearly tried to let Fiala pull the trigger.  Give Koskinen some credit for making some fine saves to keep Minnesota at bey as he was under siege for nearly 2-full minutes.  Minnesota was doing its best to throw its weight around physically as they were consistently finishing checks as they hoped to create a turnover as they worked for the go-ahead goal.  The Wild were activating their defense with regularity and as Minnesota did so it was Suter making a great backhanded pass cross-ice to Spurgeon who backhanded a shot that beat Koskinen.  4-3 Wild to stunned silence from the sellout crowd.

Awesome feed by Ryan Suter. Credit also to Zach Parise for getting the puck in deep to Suter despite having a pair of defenders on him. pic.twitter.com/jG9Jj06O3W

Minnesota would then earn a power play as Alex Chiasson hauled down Fiala.  On the power play, the Wild moved the puck fairly well setting up Fiala and Spurgeon for shots that missed high and wide of the mark.  After the failed power play, the Oilers tried to ramp up their offensive pressure.  Timely saves by Stalock really helped shut the door on the Oilers as he denied Darnell Nurse on a big one-timer.  A late Edmonton power play would see Stalock continue to make key stops as the Oilers swarmed all over the Wild zone.  With Koskinen pulled for an extra attacker, the penalty would expire and Spurgeon would race out of the penalty box and poke check a puck away and then he’d get passed the puck for an easy empty netter to earn his first career hat trick in a 5-3 Wild victory.

The top two teams in the AHL’s Western Conference clashed on Wednesday night in Milwaukee.  In a tight 1st period where both clubs were not giving much time and space offensively the Admirals would break the stalemate as Cole Schneider would poke check a puck near the blueline and race in on a breakaway where he beat Kaapo Kahkonen on a forehand to backhand move.  The shorthanded tally made it 1-0 Milwaukee after 1.  In the 2nd period, the Admirals would add to their lead as former Golden Gopher Rem Pitlick pounced on a rebound to make it 2-0.  Iowa would answer back as Kyle Rau one-timed a loose puck that blazed by Troy Grosenick to cut Milwaukee’s lead to one.  A few minutes later, Iowa would get the equalizer as Dmitry Sokolov batted a puck out of mid-air to stunned silence by the 2,711 in attendance.  The game appeared to be heading to overtime when Nico Sturm pounced on a rebound off a Matt Bartkowski point shot hat gave Iowa a 3-2 lead with about 1:10 left to play.  Iowa would lock things down for the final 70 seconds and earn a regulation road win over the 1st place Admirals.  Kahkonen had 28 saves in the victory.

LW – Adam Beckman (Spokane, WHL) ~ the skilled sniper was showing off his playmaking skills on Wednesday when he had three helpers and chipped in two goals in Spokane’s 6-3 win over Lethbridge.  Beckman has 43 goals, 97 points, 14 PIM’s and is a +40 in 55 games.