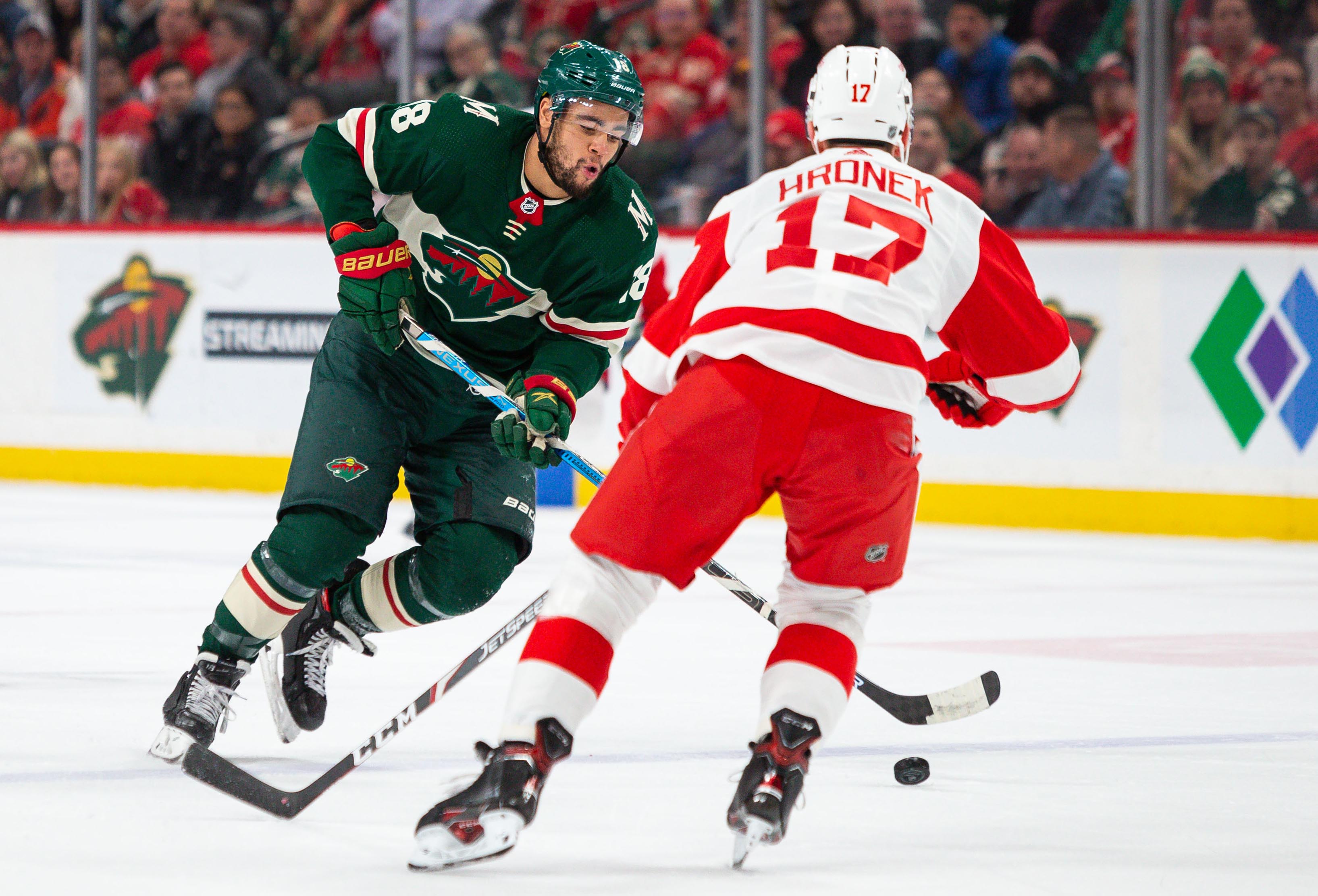 As the Minnesota Wild held on to beat a decimated Columbus Blue Jackets squad on Tuesday night I couldn’t help but think, “wait, why am I happy we won.”  Even though the Wild still feel they have a chance to scratch and claw their way into the post-season is that really what we should be cheering for as fans?  Yes, its more fun to win than lose but is it really worth it at this point when the team still sits in 22nd in overall league standings?  Do I want to see the club finish in 18th or 19th?  We’d still miss the playoffs but we’d end up hurting our draft position.

That isn’t an issue for the Detroit Red Wings who can feel pretty secure in the understanding they are going to finish in last place for the 2019-2020 NHL season as they trail 30th place Los Angeles by 16 points.  Detroit fans have had no choice but to #EmbraceTheTank for almost the entire season.  So will the Wild earn a road win in Detroit or will the Red Wings surprise with a victory over Minnesota?

1st Period Thoughts:  Minnesota tried to pin the Red Wings into their own end with a strong forecheck with the Zach Parise, Joel Eriksson Ek and Jordan Greenway line.  The Wild followed up with Gerald Mayhew who got a half step on Detroit’s defense and his backhander would give Jimmy Howard a little trouble as he sprawled to cover up the puck near the right post.  The next few minutes were spent chasing the puck around the ice until Mikko Koivu was called for hooking giving Detroit its first power play of the game.  The Detroit power play looked a bit disjointed and they had difficulty getting set up in the offensive zone.  Minnesota’s penalty killers were pressuring the puck carrier well and forcing turnovers for some easy clears of the zone.  As the penalty expired, Koivu who had just exited the penalty box would gather up the puck and would change speeds and walk around Brendan Perlini forcing him to hold onto the Wild captain and taking a penalty in the process.  On the man advantage, the Wild struggled to get set up in the offensive zone against some good puck pressure by the Red Wings penalty killers.  The Wild did finally get established in the offensive zone and they set up Mayhew for a chance from the slot that was steered aside by Howard.  After the penalty had expired, the Wild would attack off the rush and it was Ryan Donato dishing a puck to Ryan Hartman who fed it to Koivu who then sent a perfect set up for Hartman who redirected it by Howard.  1-0 Wild.  Minnesota would strike again on the next shift as a point shot by Greg Pateryn that was redirected by Hartman that drew a rebound from Howard and then Donato gathered it up and buried it to make it 2-0 Wild.  A few minutes later, Mayhew would chase down a puck and help get the forecheck started and the puck eventually made its way out to the point where Matt Dumba stepped into a slap shot that beat Howard.  3-0 Wild to indifference from the Detroit crowd.  Detroit Head Coach Jim Blashill would call a timeout to chew out his squad.  The tongue-lashing seemed to get Detroit to hustle a bit more and the Wild started to spend some time defending in their own end.  Alex Stalock found himself a bit busier as Detroit was sending any kind of shots they could muster.  Dylan Larkin would swing a shot towards the goal that was redirected by Anthony Mantha that missed wide.  Minnesota would counter attack as Eric Staal blocked a shot and Gerald Mayhew turned on the jets to track it down and find Staal with a pass that sent him on a breakaway but his backhand shot would miss high over the goal.  Detroit had good pressure late as Madison Bowey tried to pick a corner only to be denied by the shoulder of Stalock.  Minnesota would counter with a breakaway by Zach Parise but his little backhander was denied by patient save by Howard.  The physical play intensified as both teams were finishing their checks.  The period would end with the Wild holding onto a 3-0 lead, but Detroit was clearly playing with more determination than they started the game with.

2nd Period Thoughts:  The Red Wings were working hard and the Wild seemed a bit listless to start the 2nd period.  There were not a lot of scoring chances, but Detroit was spending more and more time in the Minnesota end of the ice and it was only a matter of time before that would become an issue for the Wild.  Anthony Mantha would get behind the Wild defense and he’d race in and let go of a heavy wrist shot that beat Stalock top shelf to cut the Wild lead to two, 3-1.  Minnesota would try to settle things down after Mantha’s goal as the Red Wings started to swarm once again.  The Wild had a close chance of their own as Dumba stepped into a slap shot that rang off the post and stayed out and as Minnesota tried to gather up the loose puck, Staal was tripped up giving the Wild a power play.  On the power play, the Wild set up Fiala for a one-timer that missed high and wide.  Minnesota’s power play didn’t let up and Alex Galchenyuk threaded a cross-ice pass to Dumba for a one-timer that he rocketed by Howard.  4-1 Wild.  Minnesota’s 2nd line would follow that up with a goal of their own as Wild were physical and strong along the boards as Greenway gathered up the puck and he’d wire a wrist shot by Howard.  5-1 Wild and Blashill would swap out Howard for Jonathan Bernier.  The Red Wings would have a great chance as a shot from the point was stopped by Stalock but then he had to stretch to block aside an attempt to stuff home the rebound by Tyler Bertuzzi.

Koivu would get a roughing call as he battled Adam Glendening for the puck and the replay showed Glendening holding onto Koivu’s stick.  Detroit didn’t do much with the man advantage as the Wild calmly forced turnovers with timely puck pressure.  Just as the penalty expired, Kevin Fiala would dangle around Bowey and then beat Bernier with a wicked backhander that went top shelf.  6-1 Wild on an a wicked goal as they had to be feeling pretty confident going into the 3rd.

3rd Period Thoughts:  The 3rd period started kind of the same way the 2nd period did with Detroit showing a bit more jump.  Sam Gagner got a step on the Wild defense but his wrist shot was steered aside by Stalock.  The Wild was trying to keep its shifts short and keep its team as fresh as it could for tomorrow night’s game against Columbus.  With the sparse home crowd mocking their team with howls, the Wild would add to its lead as Fiala found Eric Staal with a cross-ice pass who fired it by Bernier.  7-1 Wild.  The Red Wings seemed to be just going through the motions while Minnesota looked to continue padding the stat sheet.  It wasn’t the most entertaining thing to watch but the Wild were playing fairly smart and doing what they could to burn the clock.  A late power play for the Wild was an opportunity to reward the effort of the 4th line who got some time on the man advantage.  It really just served to kill more time and the Wild rolled to a 7-1 victory.

Iowa was without top goal scorer Gerald Mayhew after his promotion to the big club, but it didn’t seem to slow them down much.  Just 1:36 in, Mason Shaw scored his 3rd goal of the season as he fired a shot off the rush that beat Oskar Dansk to make it 1-0 Iowa.  Iowa would add to its lead a few minutes later on the power play as Luke Johnson centered a puck that went off a skate that eluded Dansk to make it 2-0.  Later in the 1st period, on the power play Johnson took a Sam Anas pass and sniped a wrist shot that sent the water bottle flying as he gave the Wild a 3-0 lead going into the 2nd.  The Wolves would answer back in the 2nd period as Brandon Pirri found Gage Quinney near the top of the crease that he redirected by Kaapo Kahkonen.  Initially it was ruled a no-goal but after some consideration it counted and Chicago was now trailing 3-1.  Iowa’s lead would further diminish a few minutes later as a turnover in the offensive zone turned into an opportunity for Tye McGinn who wired a shot by Kahkonen to make it 3-2 Wild.  With the game appearing to be on the verge of turning the wrong way, Iowa would extend its lead back to two on a pretty tap in play as Matt Bartkowski backhanded a cross-ice pass to Dmitry Sokolov who buried it to make it 4-2.  Iowa would then strike in the last moments of the 2nd on the power play as Johnson scored his 3rd goal of night night on another bottle-popper to make it 5-2 going into the 3rd.  Iowa would lock things down defensively in the 3rd and earn the victory.  Kahkonen had 21 saves in the win.