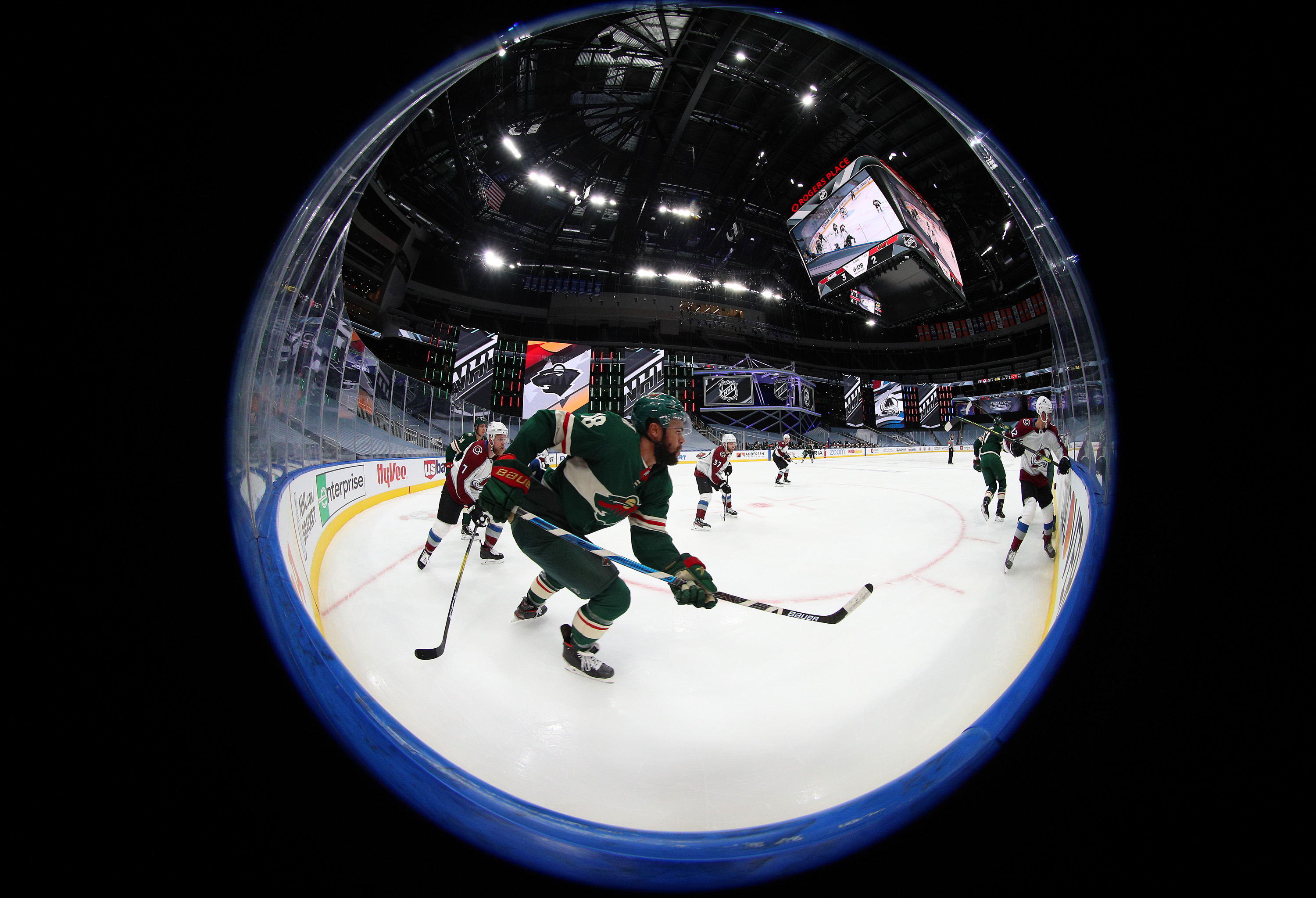 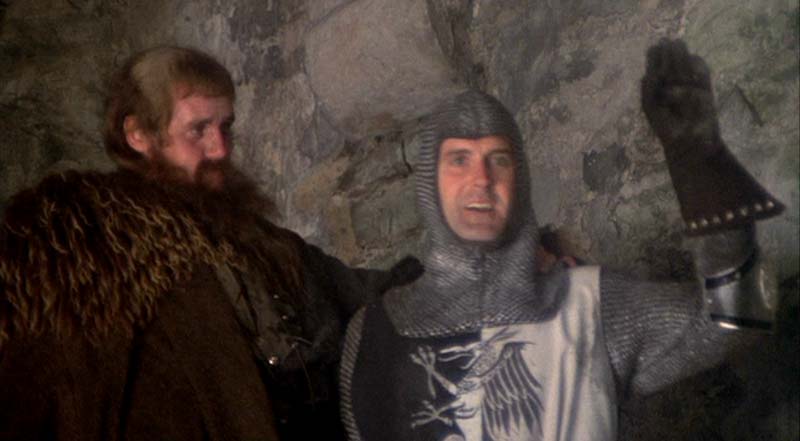 Why does the Minnesota Wild’s current scenario remind me of the scene with Lancelot where he storms Swamp Castle in Monty Python and the Quest for the Holy Grail.  Especially where the King of Swamp Castle who was hoping to marry off his son Herbert to a Princess to acquire some better land than the swamps that made up his kingdom.  His plan was going to work until his son Herbert fired an arrow from the tower of the castle that reached Lancelot asking for help and he rushed to the rescue killing many guards and wedding guests along he way.  So with his plan apparently in shambles and news that the father of the princess (i.e the person with the good land) may recover he dispatched guards to finish him off quietly to make sure the ‘merger’ / wedding still took place.  As the Swamp King said, “this is supposed to be a happy occasion, about the wedding of two young people, let’s not bicker and argue about who killed who.” 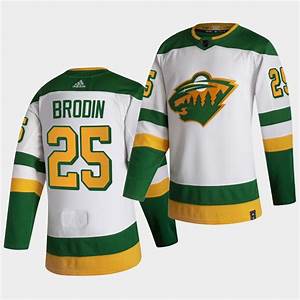 For the Minnesota Wild, today’s game was supposed to be a happy occasion where they delighted a fanbase by debuting their Adidas Reverse Retro jerseys for the first time.  The Minnesota North Stars inspired breezers (with stars on them) and green and gold colored Wild logo has been a monster hit with fans.  Even if you go to the Hockey Lodge website you can’t even order any jerseys bigger than a medium because they’re all sold out.  Needless to say they’ve been a big hit and I think after Wild fans watch their team play in this gear a few games they will lobby to make the change permanent.  I even wrote about them and the fact I think there will be pressure to change the club’s color scheme here.  I know that bothers younger Wild fans who feel the team needs to move on from the previous NHL club, but the truth is the holiday colors are tiresome.  Green and Gold will make for a more attractive team and they can still use the Wild logo and look just fine.

Yet the excitement of seeing the team playing in North Stars’ inspired uniforms will be dampened significantly by the injury last evening to the team’s best goal-scoring defenseman Matt Dumba and the suspension of one of its best forwards in Kevin Fiala who sits out the 2nd game of his 3-game suspension for a check from behind to Los Angeles’ Matt Roy.  Marcus Johansson was also banged up from the game and had yet to be evaluated by the team’s medical staff.  That will mean the team will likely move Brad Hunt to the 3rd pairing on defense along side old partner Carson Soucy and move up Ian Cole to the 2nd pairing while bringing up 2019-20 AHL MVP Gerald Mayhew (#GerryTime) and either Luke Johnson or Kyle Rau from the taxi squad.

No doubt the Colorado Avalanche will be looking for a sweep after dominating Minnesota in a 5-1 win last night.  The Avalanche had more speed, skill and perhaps more ‘want to’ throughout most of last night’s game.  While Kaapo Kahkonen did his best to keep it close, penalties gave Colorado’s lethal power play too many chances and the Avalanche would pull ahead late in the 1st period and not look back.  My guess is the Wild hope Cam Talbot feels well enough to return to the crease, but he’ll have to play very well if Minnesota is to have a chance at all.  Minneapolis Star Tribune‘s Sarah McLellan said Talbot has declared himself ‘ready to go’ to be able to start this evening.

Simply put, the Wild do not have any real answer to completely contain the Avalanche’s 1st line of Nathan MacKinnon, Gabriel Landeskog and Mikko Rantanen.  They really can only hope to hold the line to a goal or maybe two at the least.  The problem is, the Wild’s offense is without two of its key contributors in Fiala and Dumba which makes the possibility of netting at least 3 goals a rather unlikely accomplishment.

The Avalanche have plenty of scoring depth up front and the back end so what must the Wild do in order to have a chance to win tonight?

1. Stay out of the penalty box – Colorado is already very dangerous at even strength but they are even more dangerous with the man advantage.  Minnesota did get tagged with some questionable calls during the game (the weak 4-minute double minor for cross checking on Soucy comes to mind) but the Wild must put that out of their mind and do all they can to keep this game at even strength as much as possible.

2. Offensively, keep it simple and ugly – Minnesota is not going to win this game trying to play run and gun hockey against Colorado.  The team must adopt a strategy of funneling pucks to the net and looking for the ugly crash the net / tip in goals.  Joel Eriksson Ek is the team’s leading goal scorer, but it hasn’t been from sniping shots from the faceoff dots it has been from rebounds and a willingness go into the tough areas of the ice.  An early goal would also be huge so the Wild aren’t chasing the game and feel compelled to take risks early to get back into it.

3. Circle the Wagons – Whether its Talbot or Kahkonen between the pipes, the Wild need to try to keep the Avalanche to the perimeter as much as possible and do what they can to block shots.  I realize the Avalanche have some big shooters in their lineup that can rip it from the point but those shots still are far less likely to find the back of the net than the ones from in close or off the rush.  I think Talbot and Kahkonen can make the first save, so it will be incumbent on the Wild’s defenseman and forwards to sweep away dangerous pucks so they don’t turn into secondary scoring chances for Colorado to pounce on.

What do you think will be important for the Minnesota Wild to do to earn a series split at home against Colorado?  Tell us on Twitter @CreaseAndAssist or in the comment section below!