It is the moment fans, prospect-nerds like myself get excited about.  Yet that feeling of excitement must pale in comparison to the myriad of anxiety, excitement that 31 players and their families and friends will feel as they hear their names announced.  For the teams and their scouts, this culmination of years of travel, research, interviews and countless meetings.  For families, its a lifetime of hours spent traveling to rinks, practicing and drilling and paying the sweat equity to get to this point where the direction of their career will turn on the announcement made by an NHL team’s General Manager, head scout or player.  Of course that also means, there will be plenty of players and families who will get dressed up and ready for this day and they won’t hear their name called.  At least not today.

I know I mentioned this in my draft preview articles, but its impossible for me not to think back to 10 years ago when the NHL Entry Draft was held in St. Paul at the Xcel Energy Center.  It was the first (and so far only) time I had been to a draft for any professional sport.  Having watched the draft on television or streamed via computer for years, it was amazing to me how being there made it that much more exciting.  It was somewhere in between like witnessing the New York Stock Exchange and the Lottery where you could see the activity down below but you didn’t entirely know what to expect. 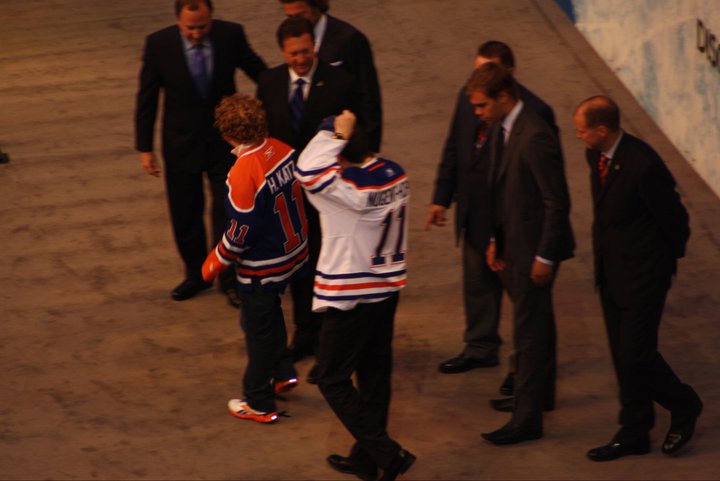 Here is my photo of Ryan Nugent-Hopkins being selected 1st Overall that year where you can see Taylor Hall right behind him.  My wife, and a good friend Bruce were there to take it all in from Club Level (the tickets were free and that’s where they had us sitting, pure luck).  And the draft gave us a little bit of everything from surprise selections to trades.  Adding to the flavor was the announcement of the name of the ‘new’ Winnipeg franchise as there were plenty of Jets fans in attendance to celebrate it.  No doubt this year’s draft will be a bit of a celebration for the Seattle Kraken as they enter the league.

As the Minnesota Wild go into the 2021 1st round with two selections (22nd Overall & 26th Overall), they find themselves near a crossroads.  After a better than expected season and a Calder Trophy winning season from its young star Kirill Kaprizov, fans are hoping to see the team make a splash.  Will the team keep its two 1st round selections or will they trade one (or both) of those picks to bring in some help?  The last time the organization had two picks in the NHL Entry Draft was 2006 and then Wild General Manager Doug Risebrough used the pick (and promising prospect Patrick O’Sullivan) to the Los Angeles Kings for Pavol Demitra.  Listen to the Vancouver crowd as they are surprised by Minnesota’s draft-day move.  NHL commissioner Gary Bettman‘s surprise at their reaction is priceless.

So will history repeat itself?

Kind of, as the Wild traded a 3rd round pick, 90th overall and the 22nd Overall pick to the Edmonton Oilers to move up to make its first selection in the draft. 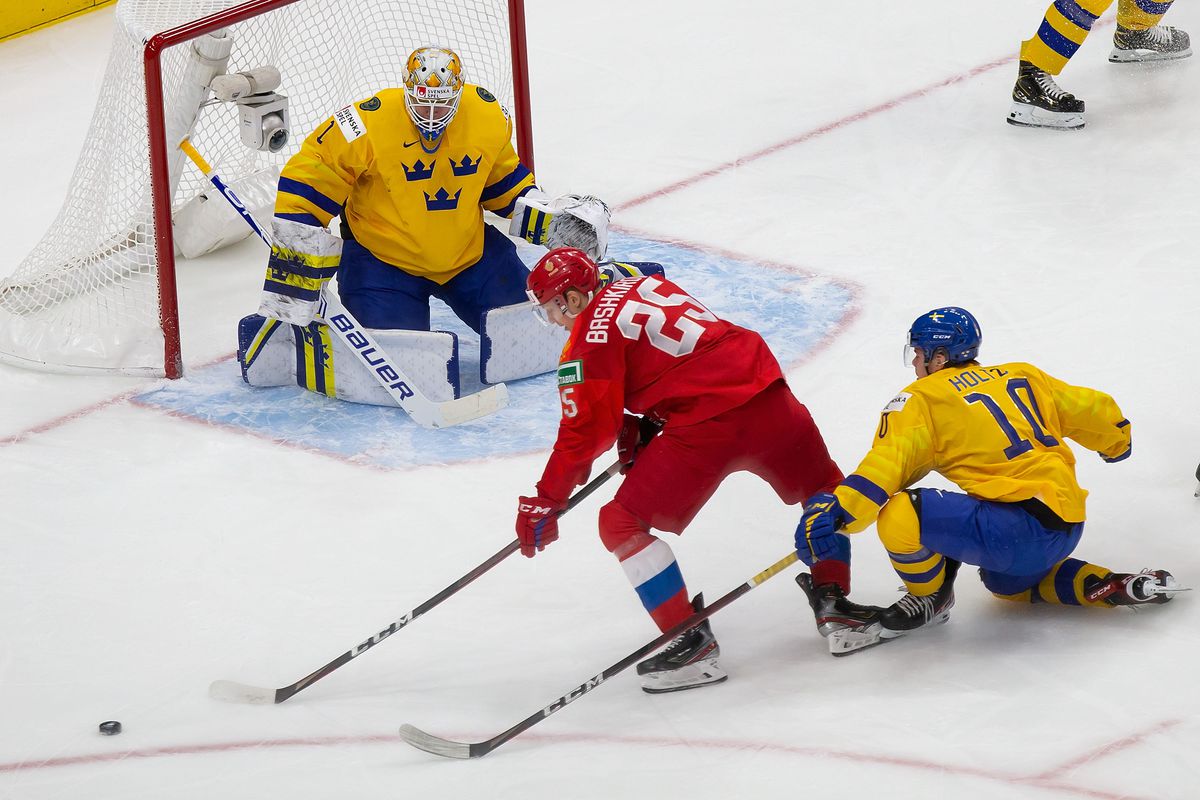 Talent Analysis:  If you ever watched the film Top Gun and you heard Goose‘s description of Ice Man, how he was a pilot that simply doesn’t make any mistakes and you have a similar disclaimer for Wallstedt.  Another goaltender who is a blend of size and technical refinement who is also demonstrates great poise under pressure.  Perhaps this calmness comes from the fact his mind anticipates developing plays in front of him and he puts himself in optimal position to make saves.  He likes to move to the top of his crease to challenge shooters.  His post to post movement is good, but at times looks almost leisurely in its pace.  Wallstedt likes to leave his crease to help play the puck to set it up for his defenseman.  He tracks pucks well through traffic and he relies on his positioning and his big body to make the most of his saves.  His glove is ok, but could be better and will need to be an area of his game he must improve to be effective at the next level.  However its not terrible and the rest of his skillset is good to elite making him a goaltender with starter potential.  Cossa are Wallstedt are going to be 1st round selections, its all a matter of who gets taken first.

What the Scouts said:

“He’s a strong, fluid skater in the crease, and doesn’t mind coming out to challenge oncoming threats. He’ll ramp up the aggression when necessary, but only when the moment calls for it. He tracks pucks well. He doesn’t get rattled when he makes a mistake. Wallstedt’s precise finding his parameters around the blue paint, and has a fairly evenly distributed ability to stop pucks with his hands.” ~ Eliteprospects

“(Boston goaltender Jeremy) Swayman is a good indicator going forward for goalies who lack high end athletic traits, who also possess a fantastic sense and tracking ability for the game. Wallstedt shares a lot of similarities to
Swayman, who looked unbelievable this year but I think he will settle as a good starter, not a great one.” – HP Scout, Brad Allen, June 2021

“His composure is really good, and obviously his size is a plus, but he looked in control, he wasn’t flopping around, he was always square.” ~ NHL Scout

“He’s got that prototypical modern goalie build, he’s a big guy who moves well and has a lot of upside.” ~ NHL Scout

Bottom Line:  Scouts are somewhat divided over which goaltender they think would go first in this draft.  Wallstedt is another potential NHL starter, who has the size and is all around technically solid.  He simply doesn’t make many mistakes.  He was playing U-20 hockey at the age of 14, that doesn’t happen in Sweden unless you are exceptionally good.  He already led his Swedish Eliteserien team in wins and to a 5th place finish in one of the best leagues in Europe.  The team’s goaltending depth is a bit thin, and it was debatable whether they had a potential starter in the system and now they have just that.  Solid selection. 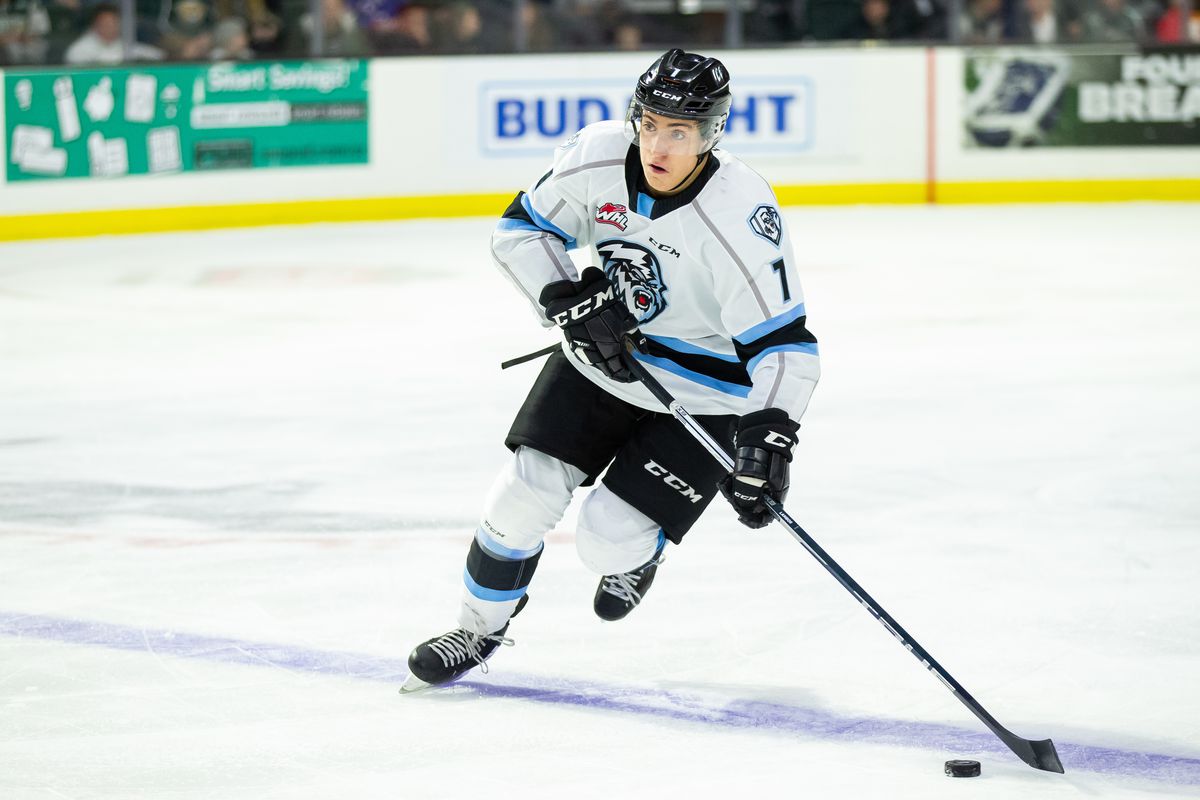 Talent Analysis:  With the pandemic, Lambos took his game to Finland where he had his share of struggles on the bigger ice sheet.  The Winnipeg-native likes to be engaged either by joining the rush or stepping up to deliver a big hit and with the bigger international sheets of the Finnish junior league he often found himself being caught out of position which led to some dangerous chances the other way.  Once he returned to the Western Hockey League he had to sit out due to a heart issue that was discovered.  He had to undergo a procedure, but by all accounts the surgery was successful and he was expected to make a full recovery but the result was he only managed to play two games for the Ice.  So lots of what you will hear about his game are based on what he did last year.  He’s a mobile defenseman with some ability at both ends of the ice.  He has a shot and passing ability is ok, but he’s probably not going to be a player you are going to use much on your power play.  Lambos is normally pretty careful with the puck but some scouts question his mental side of the game and wonder if he can process the game fast enough to coincide with the pace of the game at higher levels.  He will throw the body around but at times will get himself caught out of position to make the hit.  However, he works hard shift-to-shift and battles well for the puck.

What the Scouts said:

“Lambos is a potent shooter with the skill and instincts to manipulate defenders and improve his shooting location. With and without the puck, he activates from the point, becoming a passing option and a scoring threat. He fakes shots and passes, waits for the defender to commit, then bursts into the space he created. Constant head fakes add another layer of deception.” ~ Eliteprospects.com

“He competes and he’s pretty smart. Not a lot going on in his game, but he can skate and there is no lack of effort.” – NHL Scout

“He’s solid but not spectacular. No high end offense but really good skating, good compete and defending for a guy his size.” – NHL Scout

“Lambos is a smart kid and layered player that can play in big
moments or make the simple game.  He didn’t see steps forward in his game and fear he’s peaked physically.” – Future Considerations Scout

Bottom Line:  Maybe its just me, but it seems like the Minnesota Wild just tried to replace Ryan Suter but we might be getting a player that projects to be a bit more like Nick Schultz.  He is a mobile defenseman who didn’t play a real flashy style of game, but who could defend reasonably well and move the puck up the ice and has enough skill to perhaps be a Top-4 defenseman with some development and added strength to his 6’0″ / 6’1″ frame but that may be an ‘at best’ scenario.  I thought there were other players left on the board that may have brought more size (Buium, Chayka, Nause), skill (Chayka), speed (Olausson), physicality (Allan) or offense (Nause & Olausson) than Lambos.  But he sounds like a kid that competes, plays a fairly simple game.  He’s obviously years away, but it certainly was a step to add depth to its pool of defenseman prospects.  However, some of the quotes make me a bit worried about this pick especially since the scouts seem to sour more on his potential the more they watched of his game.  Only time will tell if those concerns are truly warranted or not.

What did you think of the Minnesota Wild’s 1st round selections?  Tell us what you think @CreaseAndAssist!